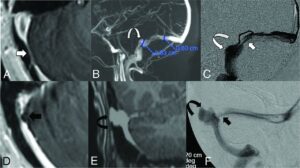 Dural venous sinus stenosis has been associated with idiopathic intracranial hypertension and isolated venous pulsatile tinnitus. However, the utility of characterizing stenosis as intrinsic or extrinsic remains indeterminate. The aim of this retrospective study was to review preprocedural imaging of patients with symptomatic idiopathic intracranial hypertension and pulsatile tinnitus, classify the stenosis, and assess a trend between stenosis type and clinical presentation while reviewing the frequencies of other frequently seen imaging findings in these conditions.

In this cohort, most patients with idiopathic intracranial hypertension had extrinsic stenosis, and most patients with pulsatile tinnitus had intrinsic stenosis. Awareness and reporting of these subtypes may reduce the underrecognition of potential contributory stenoses in a given patient’s idiopathic intracranial hypertension or pulsatile tinnitus.

Catamenial Epilepsy Treatment Approaches: What a Gynecologist Needs You to Know