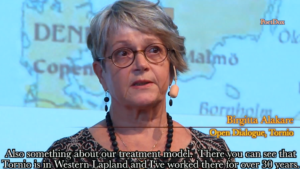 On February 19, 2021, the world lost Birgitta Alakare, the former chief psychiatrist at Keropudas Hospital in Tornio, Finland and a pioneer in the development of Open Dialogue. An accomplished physician and family therapist, she authored many professional and scientific articles and taught and lectured around the world. She was revered and loved by many who worked with and learned from her.

I first met Dr. Alakare when I traveled to Tornio in 2012 for the 17th International Conference on the Treatment of Psychosis. I had learned of Open Dialogue (OD) through Robert Whitaker’s Anatomy of an Epidemic and my initial focus was on the apparent lack of reliance on pharmacotherapy as an essential component of psychiatric treatment. I arrived alone in that small town, in what felt to be an extremely remote part of the world. I was deeply moved by what I encountered and shared my reflections at the time. It was a transformative experience. I came to realize that use of psychiatric drugs, while important, was only a part of the story. I learned about a way of caring for people that is deeply humane.

During my first encounter with Dr. Alakare, I met a soft-spoken woman. She was an internationally recognized expert in her field, surrounded by admirers, who treated everyone with kindness and appreciation. During my career in medicine it has been my experience that this kind of humility is rare, especially among those of her stature. I was an American psychiatrist, new to this way of working, traveling from another small town on the other side of the globe. During this and subsequent visits, Dr. Alakare embraced me as she does everyone she encounters in clinical practice and the professional domain: with an earnest respect and warmth.

True to the practice of OD, Dr. Alakare often said little but when she spoke, I found myself leaning in and listening attentively. What I heard has stayed with me. At that first conference, she suggested we have a discussion about “what we mean when we use the word ‘schizophrenia.’” In my journal, I wrote that she talked about what this label means for people and she discussed our obligation to try to understand peoples’ utterances even if their words do not at first appear to make sense. A hallmark of OD is that during clinical encounters practitioners turn to each other and reflect on what they have heard. She was asked if clinicians ever have conversations when the person or family is not present. This is a common query since many of us think we will lose something by not having such discussions among colleagues. While I do not recall her exact words, what I remember is that she said something about not feeling comfortable with the nature of the discourse that occurs when clinicians speak among themselves. In the years since, I have thought about the hours of clinical team meetings in which I have participated over the years. Even among well-intentioned people, it is easy to take on a judgmental tone. Being forced to find language that can be shared with everyone leads people not only to speak but also to think in more respectful ways. Rather than losing something, much is gained.

I traveled to Tornio thinking I would learn about their use of psychiatric drugs but this was not a focus of the meeting. Yet I had many questions and on the last day, I summoned the courage to approach her. “But what about lithium?” I asked. That is a drug I thought to be helpful for some and in the US it is a mainstay in the treatment of mania. She responded that she had rarely found the need for its use. I knew there was still much for me to learn.

Although our practice communities differed in many ways, there were some similarities. We were women physicians who came into medicine when there were few of us in positions of leadership. We both ended our careers as the chief psychiatrists in our organizations, situated in rural, northern regions of our respective countries. In my role, while I have had many supportive and helpful colleagues, I often lacked – yet hungered for – women role models. While I would never have the audacity to suggest there are more than these superficial characteristics shared between us, I do know that at each opportunity I did everything I could to spend time with her and she was invariably and unfailingly kind and generous. I saw her for the last time, in 2018, again in Tornio at a meeting of the same organization at which we first met. I am forever grateful that I did everything I could to be in rooms with her, to soak up her wisdom and gentle caring manner.

Open Dialogue is a way of working in which all voices are respected. It is fundamentally transparent and democratic. Humility is core to the practice. In more traditional settings, clinicians are the experts who complete their evaluations in order to render a diagnosis or formulation. In mental health clinics, and especially in hospitals, it is the psychiatrist who is granted the most authority. A psychiatrist who embraces OD must be willing to share power. While physicians do not disavow their medical training and knowledge, they acknowledge that there are many kinds of expertise and all are valued. This attitude can be transformative and healing for a young person struggling with psychosis for the first time and who is treated as strange by most everyone.

I have come to believe that Open Dialogue would not have advanced in Tornio without Dr. Alakare. OD required a psychiatric leader who was willing to share authority. During my most recent visit to Tornio, I had the pleasure of observing a panel discussion among those who had introduced OD to Keropudas Hospital. This panel included not only Dr. Alakare but also Jaakko Seikkula, the lead psychologist, as well as nurses and other members of the hospital staff at the time. It was a fascinating discussion during which their respect for one another – regardless of rank or education – was apparent. That could not have happened with a psychiatrist who insisted on the type of hierarchical structure that remains common in most hospitals. Psychiatrists do not need to be in the room for effective OD meetings to occur but psychiatrists can use their authority to discount the practice and squelch its development. It is the psychiatrist who often has sole authority to prescribe – or chose not to prescribe – the drugs. The evolution and growth of OD involved many remarkable people; without Dr. Alakare, however, it seems unlikely to have grown in the way it did.

As OD continues to expand beyond Tornio, I hope my younger psychiatric colleagues, new to this kind of practice, note the role this courageous woman played in its development. While those without power can push their way in, transformation is greatly facilitated when those in power are willing to open doors. Birgitta Alakare exemplified that principle. With a heavy heart, I offer my condolences to her family, friends, and colleagues.

Editor’s note: In 2020, the JAEC Foundation, in collaboration with SO-PSY, the Swiss Society of Social Psychiatry, submitted the candidacy of Dr. Birgitta Alakare for the Geneva Prize for Human Rights in Psychiatry. You can listen here to a lecture she gave in 2016.

Epidural Use At Birth Not Linked to Autism Risk

Clock Gene Mutation Found to Contribute to the Development of Autism