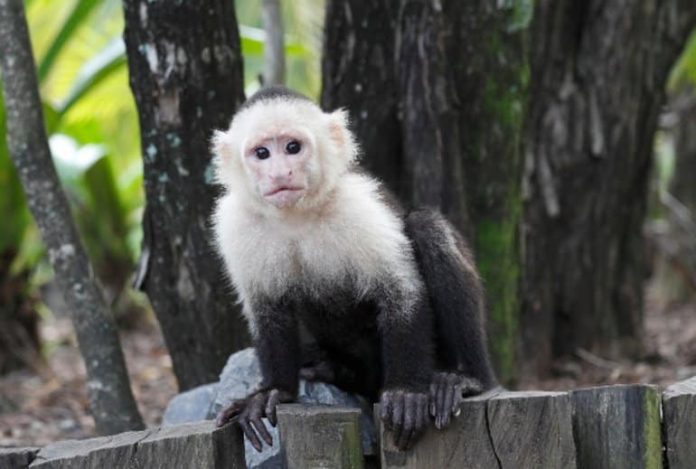 Summary: A new genetic study reveals the evolution of longevity and larger brains in capuchin monkeys.

An international team of scientists has sequenced the genome of a capuchin monkey for the first time, uncovering new genetic clues about the evolution of their long lifespan and large brains.

“Capuchins have the largest relative brain size of any monkey and can live past the age of 50, despite their small size, but their genetic underpinnings had remained unexplored until now,” explains Professor João Pedro de Magalhães, who researches aging at the University of Liverpool.

The researchers developed and annotated a reference assembly for white-faced capuchin monkeys (Cebus imitator) to explore the evolution of these traits.

Through a comparative genomics approach spanning a wide diversity of mammals, they identified genes under evolutionary selection associated with longevity and brain development.

“We found signatures of positive selection on genes underlying both traits, which helps us to better understand how such traits evolve. In addition, we found evidence of genetic adaptation to drought and seasonal environments by looking at populations of capuchins from a rainforest and a seasonal dry forest,” said senior author and Canada Research Chair Amanda Melin who has studied capuchin monkey behaviour and genetics for almost 20 years.

The researchers identified genes associated with DNA damage response, metabolism, cell cycle, and insulin signalling. Damage to the DNA is thought to be a major contributor to ageing and previous studies by Professor de Magalhaes and others have shown that genes involved in DNA damage responses exhibit longevity-specific selection patterns in mammals.

“Of course, because aging-related genes often play multiple roles it is impossible to be sure whether selection in these genes is related to ageing or to other life-history traits, like growth rates and developmental times, that in turn correlate with longevity,” said Professor de Magalhães.

“Although we should be cautious about the biological significance of our findings, it is tempting to speculate that, like in other species, changes to specific aging-related genes or pathways, could contribute to the longevity of capuchins,” he added.

The team’s insights were made possible thanks to the development of a new technique to isolate DNA more efficiently from primate faeces.

“This is a major breakthrough because the typical way to extract DNA from faeces results in about 95-99% of the DNA coming from gut microbes and food items. A lot of money has been spent sequencing genomes from different organisms than the mammals we’re actually trying to study. Because of this, when wildlife biologists have required entire genomes, they have had to rely on more pure sources of DNA, like blood, saliva, or tissue – but as you can imagine, those are very hard to come by when studying endangered animals,” explained the study’s lead author, Dr Joseph Orkin, who completed work on this project as a postdoctoral scholar at the University of Calgary, and in his present location at Universitat Pompeu Fabra-CSIC in Barcelona.

About this genetics and longevity research news

The genomics of ecological flexibility, large brains, and long lives in capuchin monkeys revealed with fecalFACS

Ecological flexibility, extended lifespans, and large brains have long intrigued evolutionary biologists, and comparative genomics offers an efficient and effective tool for generating new insights into the evolution of such traits.

Studies of capuchin monkeys are particularly well situated to shed light on the selective pressures and genetic underpinnings of local adaptation to diverse habitats, longevity, and brain development. Distributed widely across Central and South America, they are inventive and extractive foragers, known for their sensorimotor intelligence.

Capuchins have among the largest relative brain size of any monkey and a lifespan that exceeds 50 y, despite their small (3 to 5 kg) body size. We assemble and annotate a de novo reference genome for Cebus imitator. Through high-depth sequencing of DNA derived from blood, various tissues, and feces via fluorescence-activated cell sorting (fecalFACS) to isolate monkey epithelial cells, we compared genomes of capuchin populations from tropical dry forests and lowland rainforests and identified population divergence in genes involved in water balance, kidney function, and metabolism.

Through a comparative genomics approach spanning a wide diversity of mammals, we identified genes under positive selection associated with longevity and brain development. Additionally, we provide a technological advancement in the use of noninvasive genomics for studies of free-ranging mammals.

Our intra- and interspecific comparative study of capuchin genomics provides insights into processes underlying local adaptation to diverse and physiologically challenging environments, as well as the molecular basis of brain evolution and longevity.

Specific Genes Involved in Schizophrenia Identified for the First Time