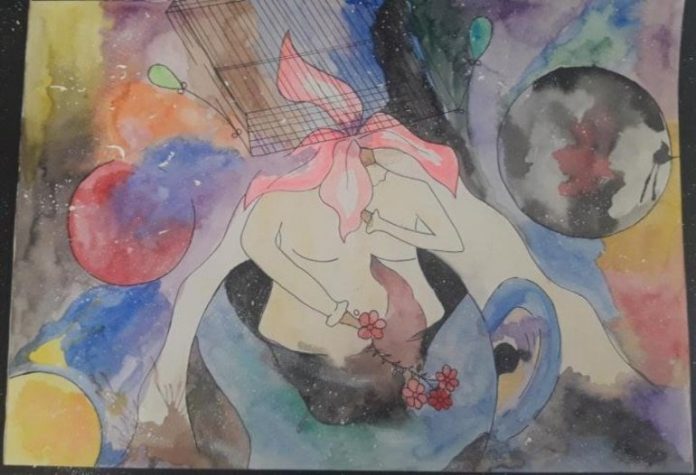 Summary: Researchers say our dreams are reflecting fears and anxiety associated with the COVID-19 pandemic.

The COVID-19 pandemic has affected people’s behavior everywhere. Fear, apprehensiveness, sadness, anxiety, and other troublesome feelings have become part of the daily lives of many families since the first cases of the disease were officially recorded early last year.

These turbulent feelings are often expressed in dreams reflecting a heavier burden of mental suffering, fear of contamination, stress caused by social distancing, and lack of physical contact with others. In addition, dream narratives in the period include a larger proportion of terms relating to cleanliness and contamination, as well as anger and sadness.

All this is reported in a study published in PLOS ONE. The principal investigator was Natália Bezerra Mota, a neuroscientist and postdoctoral fellow at the Brain Institute of the Federal University of Rio Grande do Norte (UFRN), in Brazil.

The study was part of Mota’s postdoctoral research and was supervised by Sidarta Ribeiro at UFRN and Mauro Copelli at the Federal University of Pernambuco (UFPE), both of whom are affiliated with the Neuromathematics Research, Innovation and Dissemination Center (NeuroMat).

Neuromat is hosted by the University of São Paulo (USP) and is one of many Research, Innovation and Dissemination Centers (RIDCs) supported by São Paulo Research Foundation – FAPESP.

The results are consistent with the hypothesis that dreams reflect the challenges of waking-life experience during the pandemic, and that the prevalence of negative emotions such as anger and sadness during the period reflects a higher emotional load to be processed, the authors write.

According to Mota, the findings are corroborated by those of other studies published later by researchers in the United States, Germany, and Finland.

The Brazilian study was initially reported in May in a preprint posted to medRxiv, and not yet peer-reviewed at that time. “It’s the first study on the subject to look empirically at these signs of mental suffering and their association with the peculiarities of dreams during the pandemic,” Mota told.

For Ribeiro, the authors of the study managed to document the continuity between what happens in the dream world and people’s mental lives, especially psychological distress. “This is interesting from the standpoint of dream theory,” he said. “Another point worth highlighting is that they did so quantitatively, using mathematics to extract semantics.”

The group deployed natural language processing tools to analyze 239 dream reports by 67 subjects produced in March and April 2020, shortly after the World Health Organization (WHO) declared a pandemic.

According to Mota, researchers at USP, UFRN, and the Federal Universities of Minas Gerais (UFMG), Rio Grande do Sul (UFRGS) and Rio de Janeiro (UFRJ) are conducting a multicentric study involving the analysis of data collected during a longer period (from the start of the pandemic through July) to see how dreams are affected by the deaths of family members, loved ones, friends and co-workers. “The plan is to publish the findings as soon as they’re ready so that mental health strategies can be based on this knowledge,” she said.

For some time the researchers have been developing and using computer software that analyzes language to diagnose mental illnesses, such as schizophrenia, and adapting similar tools to perform cognitive assessments.

The other two focused on content. One ranged words in certain emotional categories against a list associated with positive and negative emotions. The other used a neural network to detect semantic similarity to specified keywords, such as contamination, cleanliness, sickness, health, death and life.

In their PLOS ONE publication, the researchers say “the significant similarity to ‘cleanness’ in dream reports points towards new social strategies (e.g. use of masks, avoidance of physical contact) and new hygiene practices (e.g. use of hand sanitizer and other cleaning products) that have become central to new social rules and behavior. Taken together, these findings seem to show that dream contents reflect the different sources of fear and frustration arising out of the current scenario”.

Mota noted that more suffering was expressed in the dream reports submitted by female volunteers, although this was detected indirectly. “There are studies on gender difference in the literature. Women report more negative dreams and nightmares. I think this has to do with women’s history and daily lives, with working a double or triple shift, and the heavier mental burden entailed by concerning themselves with a job plus the home and children. The pandemic has made this worse,” she said.

The current global threat brought on by the Covid-19 pandemic has led to widespread social isolation, posing new challenges in dealing with metal suffering related to social distancing, and in quickly learning new social habits intended to prevent contagion. Neuroscience and psychology agree that dreaming helps people to cope with negative emotions and to learn from experience, but can dreaming effectively reveal mental suffering and changes in social behavior? To address this question, we applied natural language processing tools to study 239 dream reports by 67 individuals, made either before the Covid-19 outbreak or during the months of March and April, 2020, when lockdown was imposed in Brazil following the WHO’s declaration of the pandemic. Pandemic dreams showed a higher proportion of anger and sadness words, and higher average semantic similarities to the terms “contamination” and “cleanness”. These features seem to be associated with mental suffering linked to social isolation, as they explained 40% of the variance in the PANSS negative subscale related to socialization (p = 0.0088). These results corroborate the hypothesis that pandemic dreams reflect mental suffering, fear of contagion, and important changes in daily habits that directly impact socialization.

How to Take Care of Yourself Like a Therapist

Unlocking the mysteries of how neurons learn

Should Treatment for Spinal Muscular Atrophy Be Initiated Earlier?