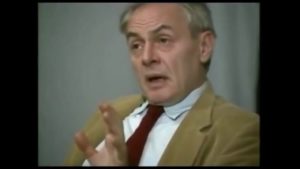 From Did You Used to be R.D. Laing?: “The people we meet are likely to be very, very frightened people whose so-called negative symptoms or positive symptoms or tokens of criteria of their ‘disorder’ are defenses that they are putting up against their fears. So they might actually be so flipped out that they’re not aware that they’re frightened, but we know that they are. So one of the things that one can at least do is to conduct oneself according to the ordinary ground rules of courtesy, politeness, and ways of showing the other person that you respect them as another creature and that you are not going to do anything to them that they don’t want done to them. And even then, one’s probably not going to do anything… one’s harmless. That is not immediately apparent to the other person. It’s no use saying ‘I’m harmless,’ because the most harmful people say that. ‘Trust me.’ ‘Give me direct eye contact.’ You know, I never trust anyone that asks me to trust them.

How Hospice Became a For-Profit Hustle

Richard Bentall: The Man Who Lost His Brother – Then Revolutionised Psychology

The Path to Diversity and Inclusion in Neurology: Virtual Residency Recruitment