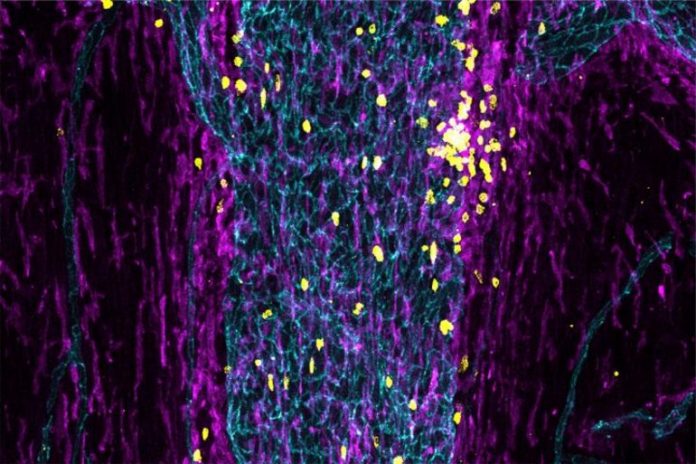 Summary: Immune cells in the meninges monitor fluid released from the brain. If the fluid contains signs of infection, disease, or damage, the immune cells initiate an immune response to tackle the problem.

Alzheimer’s disease, multiple sclerosis, autism, schizophrenia and many other neurological and psychiatric conditions have been linked to inflammation in the brain. There’s growing evidence that immune cells and molecules play a key role in normal brain development and function as well. But at the core of the burgeoning field of neuroimmunology lies a mystery: How does the immune system even know what’s happening in the brain? Generations of students have been taught that the brain is immunoprivileged, meaning the immune system largely steers clear of it.

Now, researchers at Washington University School of Medicine in St. Louis believe they have figured out how the immune system keeps tabs on what’s going on in the brain. Immune cells are stationed in the meninges — the tissue that covers the brain and spinal cord — where they sample fluid as it washes out of the brain. If the cells detect signs of infection, disease or injury, they are prepared to initiate an immune response to confront the problem, the researchers said.

The findings, published Jan. 27 in the journal Cell, open up the possibility of targeting immune cells at such surveillance sites as a means of treating conditions driven by brain inflammation.

“Every organ in the body is being surveilled by the immune system,” said senior author Jonathan Kipnis, PhD, the Alan A. and Edith L. Wolff Distinguished Professor of Pathology & Immunology. “If there’s a tumor, an injury, an infection anywhere in the body, the immune system has to know about it. But people say the exception is the brain; if you have a problem in the brain, the immune system just lets it happen. That never made sense to me. What we’ve found is that there is indeed immune surveillance of the brain — it’s just happening outside the brain. Now that we know where it’s happening, that opens up lots of new possibilities for modulating the immune system.”

Kipnis and Justin Rustenhoven, PhD, a postdoctoral researcher and the first author on the new paper, set out to find the immune system’s gateway to the brain. They saw a clue in the fact that the vessels containing fluid leaving the brain run alongside sinuses in the dura mater, the tough outer layer of the meninges just underneath the skull. Dural sinuses, which contain blood that carries immune cells, lack the tight barrier that elsewhere keeps blood separate from the brain.

“Imagine if your neighbors went through your trash every day,” said Kipnis, also a professor of neurosurgery, of neurology and of neuroscience. “If they start finding blood-stained towels in your trash, they know something is wrong. It’s the same thing with the immune system. If patrolling immune cells see tumor antigens or signs of infection from the brain, the cells know there’s a problem. They will take that evidence to immune headquarters, which is the lymph nodes, and initiate an immune response.”

The findings suggest that the immune system surveils the brain from a distance and only enters when it finds a problem. This could explain why the brain was thought for so long to be immunoprivileged.

“Immune activity in the brain can be highly detrimental,” Rustenhoven said. “It can kill neurons and cause swelling. The brain can’t tolerate much swelling because the cranium is a fixed volume. So immune surveillance is pushed to the borders, where the cells can still monitor the brain but don’t risk damaging it.”

Multiple sclerosis is a degenerative condition in which the immune system attacks the protective sheath on nerves, causing communication problems between the brain and the rest of the body. The cause is unknown. Using a mouse model of multiple sclerosis, the researchers showed that initiation of disease triggered a massive accumulation of activated immune cells in the dural sinuses, suggesting that harmful immune responses may begin in the dura mater and spread to the brain.

Further work is needed to verify the role of dural sinuses in neuroinflammatory conditions. But the location of the sinuses just on the inside of skull on the accessible side of the blood-brain barrier suggests possibilities for targeting the immune system in that area.

“If this is a gateway to the brain, we can attempt to manipulate the area with therapies aimed at preventing over-activated immune cells from entering the brain,” Kipnis said. “The dura is close to the surface, so we may even be able to deliver drugs through the skull. In theory, you could come up with an ointment that diffuses through the skull bone and reaches the dura. We might have found where inflammatory responses for many neuroimmunological conditions start, and there’s so much we can do with that.”

Functional characterization of the dural sinuses as a neuroimmune interface

Despite the established dogma of central nervous system (CNS) immune privilege, neuroimmune interactions play an active role in diverse neurological disorders. However, the precise mechanisms underlying CNS immune surveillance remain elusive; particularly, the anatomical sites where peripheral adaptive immunity can sample CNS-derived antigens and the cellular and molecular mediators orchestrating this surveillance. Here, we demonstrate that CNS-derived antigens in the cerebrospinal fluid (CSF) accumulate around the dural sinuses, are captured by local antigen-presenting cells, and are presented to patrolling T cells. This surveillance is enabled by endothelial and mural cells forming the sinus stromal niche. T cell recognition of CSF-derived antigens at this site promoted tissue resident phenotypes and effector functions within the dural meninges. These findings highlight the critical role of dural sinuses as a neuroimmune interface, where brain antigens are surveyed under steady-state conditions, and shed light on age-related dysfunction and neuroinflammatory attack in animal models of multiple sclerosis.

Race, Income, and Rurality Tied to Certified Stroke Centers in the US