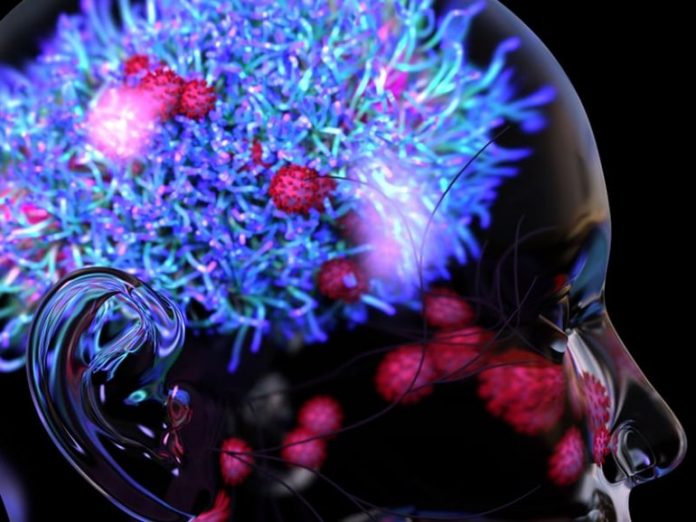 Summary: Mice exposed to COVID-19 through the nasal passage, researchers noted a rapid and escalated attack on the brain by the virus that triggered a more severe outcome of the infection, even after the lungs were cleared of the disease. Researchers also found virus levels were over 1,000 times higher in the brain than other parts of the body.

Georgia State University biology researchers have found that infecting the nasal passages of mice with the virus that causes COVID-19 led to a rapid, escalating attack on the brain that triggered severe illness, even after the lungs were successfully clearing themselves of the virus.

Assistant professor Mukesh Kumar, the study’s lead researcher, said the findings have implications for understanding the wide range in symptoms and severity of illness among humans who are infected by SARS-CoV-2, the virus that causes COVID-19.

“Our thinking that it’s more of a respiratory disease is not necessarily true,” Kumar said. “Once it infects the brain it can affect anything because the brain is controlling your lungs, the heart, everything. The brain is a very sensitive organ. It’s the central processor for everything.”

The study, published by the journal “Viruses,” assessed virus levels in multiple organs of the infected mice. A control group of mice received a dose of sterile saline solution in their nasal passages.

Kumar said that early in the pandemic, studies involving mice focused on the animals’ lungs and did not assess whether the virus had invaded the brain. Kumars’ team found that virus levels in the lungs of infected mice peaked three days after infection, then began to decline. However, very high levels of infectious virus were found in the brains of all the affected mice on the fifth and sixth days, which is when symptoms of severe disease became obvious, including labored breathing, disorientation and weakness.

The study found virus levels in the brain were about 1,000 times higher than in other parts of the body.

Kumar said the findings could help explain why some COVID-19 patients seem to be on the road to recovery, with improved lung function, only to rapidly relapse and die. His research and other studies suggest the severity of illness and the types of symptoms that different people experience could depend not only on how much virus a person was exposed to, but how it entered their body.

The nasal passages, he said, provide a more direct path to the brain than the mouth. And while the lungs of mice and humans are designed to fend off infections, the brain is ill equipped to do so, Kumar said. Once viral infections reach the brain, they trigger an inflammatory response that can persist indefinitely, causing ongoing damage.

“The brain is one of the regions where virus likes to hide,” he said, because it cannot mount the kind of immune response that can clear viruses from other parts of the body.

“That’s why we’re seeing severe disease and all these multiple symptoms like heart disease, stroke and all these long-haulers with loss of smell, loss of taste,” Kumar said. “All of this has to do with the brain rather than with the lungs.”

About this COVID-19 research news

Severe acute respiratory syndrome coronavirus-2 (SARS-CoV-2) infection can cause neurological disease in humans, but little is known about the pathogenesis of SARS-CoV-2 infection in the central nervous system (CNS). Herein, using K18-hACE2 mice, we demonstrate that SARS-CoV-2 neuroinvasion and encephalitis is associated with mortality in these mice. Intranasal infection of K18-hACE2 mice with 105 plaque-forming units of SARS-CoV-2 resulted in 100% mortality by day 6 after infection. The highest virus titers in the lungs were observed on day 3 and declined on days 5 and 6 after infection. By contrast, very high levels of infectious virus were uniformly detected in the brains of all the animals on days 5 and 6. Onset of severe disease in infected mice correlated with peak viral levels in the brain. SARS-CoV-2-infected mice exhibited encephalitis hallmarks characterized by production of cytokines and chemokines, leukocyte infiltration, hemorrhage and neuronal cell death. SARS-CoV-2 was also found to productively infect cells within the nasal turbinate, eye and olfactory bulb, suggesting SARS-CoV-2 entry into the brain by this route after intranasal infection. Our data indicate that direct infection of CNS cells together with the induced inflammatory response in the brain resulted in the severe disease observed in SARS-CoV-2-infected K18-hACE2 mice.

A New Function of the Cerebellum