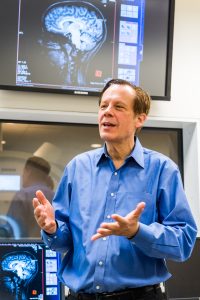 Paying attention is a fundamental brain process we all use every day. Whether keeping our eyes on the road while our cell phone rings or focusing on work while our kids yell in the background (for those of us working virtually during the pandemic), attentional control is key to healthy and successful living.

Conversely, “virtually every brain disorder has some aspect of impaired attention to it,” says Robert Desimone, director of the McGovern Institute at MIT. In depression, for example, patients often report having difficulty staying on task. And for those with autism, one prevalent view is that their ability to pay attention to certain social cues is impaired.

Understanding how people control attention at the neural level is therefore critically important to both clinical and cognitive neuroscience. And it’s an area Desimone has spent the last 4 decades studying and for which he is now receiving the CNS Distinguished Career Contributions Award.

In his award lecture this March for CNS 2021 Virtual, Desimone will present his body of work on attention, including new data on areas of the prefrontal cortex involved in paying attention, as well as new neurofeedback treatments and new technologies to better understand — and potentially improve —control over attention. He spoke with CNS about these new insights, as well as how he got started in the field and research in COVID times.

Desimone: I was an undergrad at Macalester College in St Paul, Minnesota, where my three big interests were in psychological counseling, neuroscience, and cognitive science. These interests drew initially from my interest in psychiatric disorders. I did lots of volunteer activities as a counselor in mental health, and I was fascinated in trying to understand what was going wrong with the people I was trying to help. One of the halfway houses I worked in had kids my own age, and their lives were wrecked with so many problems. I saw the urgent need to understand more about cognition, thought processes, delusions, emotions, etc. My supervisor advised I go into research, so I split my work between pure cognitive science and neuroscience.

Then came across Charles Gross at Princeton who seemed to have the best combination, studying high-level vision and cognition in primates. This completely resonated with the approach I favored to study biology with a cognitive goal. So, I got my Ph.D., persisting in using both human and primate models. It was the best of all worlds to combine knowledge between human psychology and neuroscience.

What we pay attention to has an extremely powerful impact on the information we process. So, how can we begin to understand that at the level of brain systems?

CNS: What is your favorite way to talk about attentional control?

Desimone: All of us have this shared experience of needing to pay attention to things. Our ability waxes and wanes, and often successes and failures in life have to do with ability to pay attention. If we want to understand how the brain pays attention and how it can go wrong, including in disorders, we need to start at a lower level: how do we pay attention to things visually? I often start off this way in my classes, with examples of all the things we could potentially experience in our environment all the time but don’t process.

I ask my students: How did you get into this room? They say “we opened the door and came in.” Then I say: “What was color of the door knob?” If they grabbed it, they must have seen it, yet they have no idea what color it was. It’s one of many visual examples that strongly demonstrates the tons of information coming into our sensory systems that we don’t process and aren’t aware of. What we pay attention to has an extremely powerful impact on the information we process. So, how can we begin to understand that at the level of brain systems?

There’s also a voluntary control aspect to it I like to explain. The attentional control systems are not fundamentally different from any brain control systems. Think about deciding to reach for a coffee cup instead of your glasses. Just like you can’t simultaneously reach for a coffee cup and pair of glasses, you can’t pay attention to everything simultaneously. You have to make decisions about what you are going to do next, and the prefrontal cortex plays an important role in all those decisions.

CNS: Can you give us a preview of new data you will be presenting in your CNS 2021 talk?

I am also going to discuss some work we published very recently on the ability to control our own brain states, which then has an effect on how we pay attention. We give people neurofeedback on their own brain states and show how it influences both what they attend to and their behavior. That could lead to one potential avenue for treatments for how people could learn to improve their attention or, if they have an attentional problem, how they might overcome it.

I am also hoping to talk at least briefly about new opportunities for primate genetic models, using CRISPR to create models that have cognitive impairment. I hope that is going to lead to a new era of developing treatments in animals that are more likely to translate to people than treatments that are developed in mice.

CNS: Can you tell me a bit more about the new data on the prefrontal cortex?

Desimone: In people, we used MEG (magnetoencephalography) to study different brain systems while people attend to certain types of objects and not others, and also attend to different parts of space. In these studies, we could see the coherent interactions between certain parts of the prefrontal cortex and parts of the visual system involved in processing faces, houses, and different objects. But then there is a whole different part of the prefrontal cortex engaged when subjects were searching attention for different parts of space. This shows evidence for a separation of function. And in primates, we see something very similar.

And in animals, we could reversibly inactivate these same structures — and during this brief period of inactivation of prefrontal regions, we could see the effects on specific abilities and neurons.

CNS: Can you talk a bit more about these methods?

Desimone: I am excited about deactivation methods because they allow us to test for casualty , which is something that cognitive neuroscientists struggle with the most. Generally, in people, we can see correlations but not whether the brain areas involved are actually the cause of the observed behaviors. We have used traditional methods of local chemical deactivation and, more recently, optogenetics. Optogenetics give us more precise temporal control over these areas. I think it’s the way of the future. Optogenics are going to be a primary tool for testing causal methods in primates.

CNS: Do you see your work eventually translating to the clinic?

Desimone: As we understand more about the basic neuroscience of attentional control, we can develop very specific training or specific drug targets. And also, as we develop treatments for a variety of different brain disorders, for example a new treatment for schizophrenia, we hope that some of the biological measures that we’re finding that correlate with our attentional abilities can be tracked as a measure of treatment success — sometimes referred to as a “biomarker” for the disorder. If we acquire more of these biomarkers for attention, then we might have a very precise, quantitative way of seeing how well a new treatment actually works.

CNS: How has the pandemic changed your research?

Desimone: At the very beginning, we had to drastically slow down our research, because we couldn’t even have access to labs.   As Massachusetts opened up and MIT followed suit, we’ve had more access. Just like everyone has learned to cope with groceries, shopping, and school, we have found other ways to accomplish our research goals. Our research is now going nearly 100 percent but with new adaptations; everyone is wearing masks and staying distanced, with fewer in the labs at the same time. So the research enterprise is pretty much back to speed with one exception: The research in human subjects has really taken a hit. Brain imaging, for example, is not so easy to do in human subjects right now, especially because it’s challenging to get volunteers to come in to do the studies.

CNS: What are you most excited about for the CNS 2021 Virtual?

Desimone: Unfortunately, I can’t get firsthand information from people over drinks, but I am hoping that because of virtual format, I can skim the things I only have moderate interest in and deep dive on things I’m really interested in. In the virtual format, you are in control of your own information bit stream , over what you see and hear and take in. If you aren’t interested in something, it’s really easy  to switch over. So, the virtual format could be really positive in giving us more control over the information we take in. That would be what I look forward to the most.

Water May be an Effective Treatment for Metabolic Syndrome