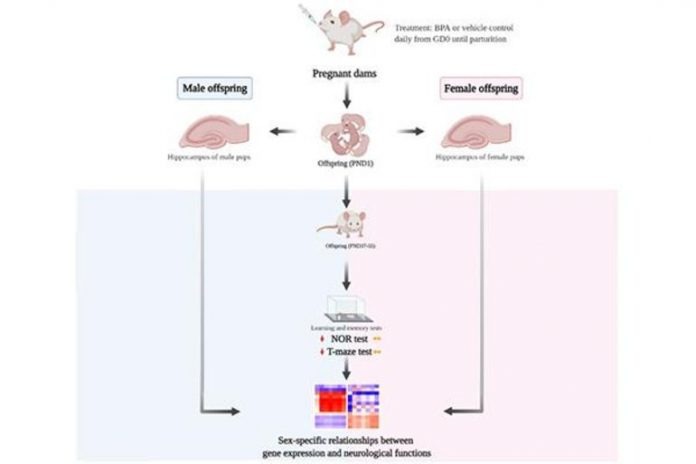 Summary: Exposure to BPA during the gestational period leads to decreased neural viability and neural density in the hippocampus of male offspring. Additionally, exposure led to the dysregulation of ASD-related genes in the hippocampus. Findings suggest BPA may serve as an environmental factor that contributes to the prevalence of male-bias in autism.

A new study by researchers from Chulalongkorn University, Tohoku University, and The George Washington University is the first to identify autism candidate genes that may be responsible for the sex-specific effects of bisphenol A (BPA) on the brain. It suggests BPA may serve as an environmental factor that contributes to the prevalence of male bias in autism spectrum disorder (ASD).

The research was published in the journal Scientific Reports.

BPA is widely used in many products in our daily life and abundant in micro/nanoplastics found in the environment, food, or the human placenta. It is thought to be an environmental influence on ASD – a neurodevelopmental disorder characterized by impaired social communication, restricted interests and repetitive behaviors. ASD is a major public health challenge around the world, with roughly 1 in 54 children in the United States being diagnosed.

“Many studies have shown BPA impairs neurological functions known to be disrupted in ASD, making scientists believe that BPA may be one of the key environmental risk factors for ASD. However, we still do not know how BPA can cause or increase the susceptibility of ASD and whether it also plays a role in the male bias of the disorder,” said assistant professor Dr.Tewarit Sarachana, head of the SYstems Neuroscience of Autism and PSychiatric disorders (SYNAPS) Research Unit at the Faculty of Allied Health Sciences, Chulalongkorn University.

“In fact, one of our recent studies has demonstrated that prenatal exposure to BPA altered the expression of several ASD candidate genes in the hippocampus in a sex-dependent pattern, but the link between the dysregulation of ASD candidate genes and impaired neurological functions is still lacking.”

“In this study, we showed exposure to BPA during the gestational period decreased neuronal viability and neuronal density in the hippocampus and impaired learning/memory in only the male offspring. Interestingly, the expression of several ASD-related genes in the hippocampus was dysregulated and showed sex-specific correlations with neuronal viability, neuritogenesis, and/or learning/memory.

Under prenatal BPA exposure, these genes may play important roles in determining the risk of ASD and its higher prevalence in males,” said Surangrat Thongkorn, a Ph.D. candidate and first author of the study.

Our recent study has shown that prenatal exposure to bisphenol A (BPA) altered the expression of genes associated with autism spectrum disorder (ASD). In this study, we further investigated the effects of prenatal BPA exposure on ASD-related genes known to regulate neuronal viability, neuritogenesis, and learning/memory, and assessed these functions in the offspring of exposed pregnant rats. We found that prenatal BPA exposure increased neurite length, the number of primary neurites, and the number of neurite branches, but reduced the size of the hippocampal cell body in both sexes of the offspring. However, in utero exposure to BPA decreased the neuronal viability and the neuronal density in the hippocampus and impaired learning/memory only in the male offspring while the females were not affected. Interestingly, the expression of several ASD-related genes (e.g. Mief2, Eif3h, Cux1, and Atp8a1) in the hippocampus were dysregulated and showed a sex-specific correlation with neuronal viability, neuritogenesis, and/or learning/memory. The findings from this study suggest that prenatal BPA exposure disrupts ASD-related genes involved in neuronal viability, neuritogenesis, and learning/memory in a sex-dependent manner, and these genes may play an important role in the risk and the higher prevalence of ASD in males subjected to prenatal BPA exposure.

Nature Draws Out a Happy Place for Children