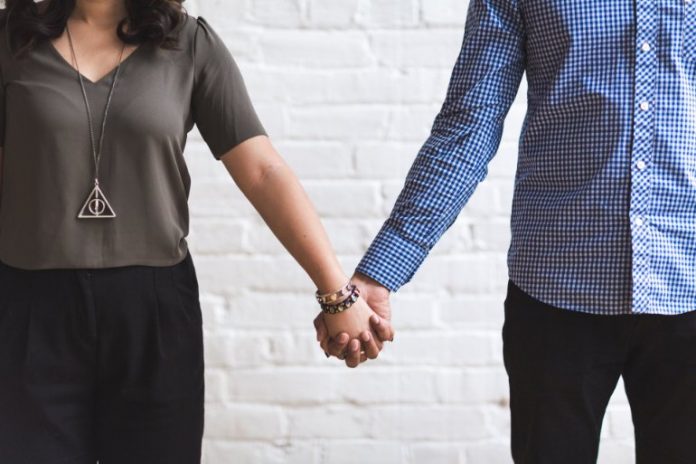 Summary: An EEG study of couples embarking on romantic gestures, such as hugging and kissing, reveals positive emotions are mainly processed in the left hemisphere of the brain.

Research into the neuronal basis of emotion processing has so far mostly taken place in the laboratory, i.e. in unrealistic conditions. Bochum-based biopsychologists have now studied couples in more natural conditions. Using electroencephalography (EEG), they recorded the brain activity of romantic couples at home while they cuddled, kissed or talked about happy memories together. The results confirmed the theory that positive emotions are mainly processed in the left half of the brain.

In previous studies on the neuronal correlates of emotion processing, feelings were usually triggered in subjects by presenting certain images or videos in the laboratory. “It was unclear whether that really reflects how people experience and act out feelings,” says Julian Packheiser. “Ultimately, emotions comprise not only the perception of feelings but also their expression.”

This is why, in the current study, the researchers measured the brain waves of 16 couples in positive emotional situations in their own homes. A measurement of this kind would not be possible using conventional EEG systems as the movements created during kissing, cuddling or gesticulation produce artifacts in the data.

“We have used a mobile EEG system that records not only brain waves but also the movement patterns of the subjects,” explains Julian Packheiser. This allowed the team to control the artifacts in the data.

Positive situations, above all emotional situations involving kissing and talking, were associated with greater activity in the frontal areas of the left half of the brain. The study thus confirmed the results from laboratory investigations and what is known as the valence model of emotional lateralisation, which states that positive emotions tend to be processed in the left half of the brain and negative emotions in the right.

About this romance and neuroscience research news

The neural basis of emotional processing has been largely investigated in constrained spatial environments such as stationary EEGs or fMRI scanners using highly artificial stimuli like standardized pictures depicting emotional scenes. Typically, such standardized experiments have low ecological validity and it remains unclear whether their results reflect neuronal processing in real-life affective situations at all. Critically, emotional situations do not only encompass the perception of emotions, but also behavioral components associated with them. In this study, we aimed to investigate real-life emotions by recording couples in their homes using mobile EEG technology during embracing, kissing and emotional speech. We focused on asymmetries in affective processing as emotions have been demonstrated to be strongly lateralized in the brain. We found higher alpha and beta power asymmetry during kissing and embracing on frontal electrodes during emotional kisses and speech compared to a neutral control condition indicative of stronger left-hemispheric activation. In contrast, we found lower alpha power asymmetry at parieto-occipital electrode sites in the emotional compared to the neutral condition indicative of stronger right-hemispheric activation. Our findings for alpha power asymmetries are in line with models of emotional lateralization that postulate a valence-specific processing over frontal cortices and right-hemispheric dominance in emotional processing in parieto-occipital regions. In contrast, beta power asymmetries pointed more towards valence-specific processing indicating that, while alpha and beta frequencies seem to be functionally associated, they are not reflecting identical cognitive processing.