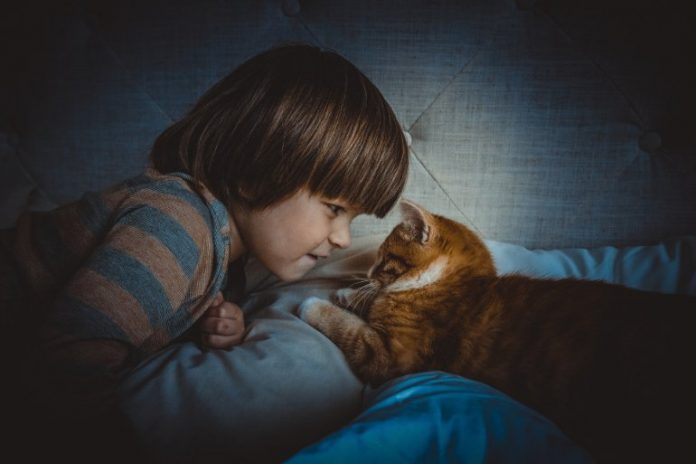 Summary: Cats may help increase empathy while reducing symptoms of separation anxiety in children with autism, a new study reports.

As a former school nurse in the Columbia Public Schools, Gretchen Carlisle would often interact with students with disabilities who took various medications or had seizures throughout the day. At some schools, the special education teacher would bring in dogs, guinea pigs and fish as a reward for good behavior, and Carlisle noticed what a calming presence the pets seemed to be for the students with disabilities.

Now a research scientist at the MU Research Center for Human-Animal Interaction (ReCHAI) in the MU College of Veterinary Medicine, Carlisle studies the benefits that companion animals can have on families. While there is plenty of existing research emphasizing the benefits of dogs for children with autism, Carlisle’s newest study has found cats may help increase empathy while decreasing separation anxiety for children with autism. The findings can have beneficial implications for families considering adopting a companion animal for their child.

“Previous research has shown parents of kids with autism are more stressed than parents of kids with any other disability,” Carlisle said. “If a family is considering adopting a companion animal, we want to provide the best evidence-based information possible so they can make an informed decision, and cats might be more beneficial than dogs to some families.”

In the study, families that had children with autism aged 6-14 were recruited through the MU Thompson Center for Autism and Neurodevelopmental Disorders and monitored after adopting a cat into their home. The cats were screened for temperament to ensure they were calm and a good match for the family. Not only did the families report an instant bond between their child with autism and their new cat, but the bond remained strong over the course of time, and the child’s anxiety decreased over time.

“We found the main benefit of these companion animals is their unconditional acceptance,” Carlisle said. “Some children with autism may have sensory issues or be sensitive to loud noises, so a cat may be an appropriate, comforting pet for some families due to their calming presence.”

Helping families make the best choice for their kids has motivated Carlisle’s research with companion animals, and the study’s findings highlight the benefits of human-animal interaction.

“As a former pediatric nurse, I have always strived to help children, and one thing I learned is that you need to involve the parents so they can make informed choices for their children,” Carlisle said. “I see pets as a way to enhance wellness, and it feels gratifying to provide assistance to families that have a lot on their plate.”

Funding: “Exploratory study of cat adoption in families of children with autism: Impact on children’s social skills and anxiety” was recently published in the Journal of Pediatric Nursing. Funding for the study was provided by the Human Animal Bond Research Institute and the Winn Feline Foundation.

Exploratory study of cat adoption in families of children with autism: Impact on children’s social skills and anxiety

This was the first randomized controlled trial of adoption of a temperament screened cat by families of children with ASD. Families assigned to the treatment group adopted a cat and were followed for 18 weeks. Families assigned to the control group were followed for 18 weeks without intervention, then converted to treatment, by adopting a cat and were followed another 18 weeks. Adopted cats were screened using the Feline Temperament Profile to identify a calm temperament. Surveys measured children’s social skills and anxiety and parent/child cat bonding.

Our study ( N = 11) found cat adoption was associated with greater Empathy and less Separation Anxiety for children with ASD, along with fewer problem behaviors including Externalizing, Bullying and Hyperactivity/Inattention. Parents and children reported strong bonds to the cats.

This exploratory study found introduction of a cat into the home may have a positive impact on children with ASD and their parents. Based on this intial finding, future studies with larger sample sizes are recommended.

If parents of children with ASD are considering cat adoption, health care providers might consider recommending adoption of a cat screened for calm temperament.