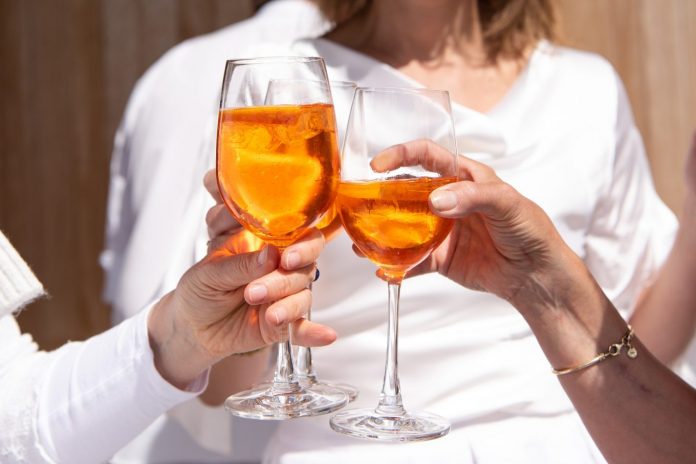 Summary: People who are most sensitive to the pleasurable and rewarding effects of alcohol are at greater risk of developing alcohol use disorders.

A new study out of the University of Chicago Medicine following young adult drinkers for 10 years has found that individuals who reported the highest sensitivity to alcohol’s pleasurable and rewarding effects at the start of the trial were more likely to develop an alcohol use disorder (AUD) over the course of the study.

Moreover, when retested on their responses 10 years later, those who became alcoholics had the highest levels of alcohol stimulation, liking and wanting – and these were heightened compared to their baseline with no signs of tolerance to these pleasurable effects.

The research, published on Jan. 5 in the American Journal of Psychiatry, followed a cohort of 190 young adults in a laboratory-based binge-drinking scenario at three regular intervals over the course of 10 years.

These results indicate that individuals developing an AUD are more likely to be sensitized to the effects of alcohol — that is, they experience a stronger positive response — rather than habituated to the substance with a lower level of response. In these same individuals, alcohol was less sedating for them from the beginning and this did not change over time.

“Prior longitudinal studies have looked at young drinkers’ response to alcohol and focused primarily on the fatiguing and impairing effects of alcohol,” said lead author Andrea King, PhD, professor of psychiatry and behavioral neuroscience at UChicago Medicine.

“The thinking that alcoholics do not like the effects of alcohol over time is based on ad-hoc reports of patients entering treatment. Only by testing the same people over a substantial amount of time to see if alcohol responses change over time were we able to observe this elevated response to alcohol compared with placebo, and in participants who did not know the contents of the drinks, so expectancy effects were minimized.”

The study showed that higher sensitivity to the euphoric and rewarding effects of alcohol can predict who will go on to have an AUD as they progress through their 20s and 30s.

“These pleasurable alcohol effects grow in intensity over time, and do not dissipate, in people progressing in excessive drinking,” said King. “This tells us that having a higher sensitivity to the rewarding effects of alcohol in the brain puts such individuals at higher risk for developing addiction. It all fits a picture of persistent pleasure-seeking that increases the likelihood of habitual excessive drinking over time. Alcoholics were thought to need to drink more to finally get their desired effect when they drink, but these well-controlled data do not support that contention. They get the desirable alcohol effect early in the drinking bout and that seems to fuel wanting more alcohol.”

While it may seem relatively intuitive that individuals who experience alcohol’s pleasurable effects most intensely are at the greatest risk for developing drinking problems, King’s findings run counter to current prominent addiction theories.

“Our results support a theory called incentive-sensitization,” said King. “In response to a standard intoxicating dose of alcohol in the laboratory, ratings of wanting more alcohol increased substantially over the decade among the individuals who developed more severe AUD. Additionally, the hedonic response — essentially, how much a person liked the effects — remained elevated over this interval and didn’t go down at all. This has traditionally been the crux of the lore of addiction – that addicts don’t like the drug (alcohol) but can’t stop using it.”

The participants were regular light or heavy social drinkers in their mid-20s at the start of the trial from 2004 to 2006. They were brought back for repeated testing of alcohol responses in the laboratory five and 10 years later as they approached middle adulthood. In between testing periods, participants were interviewed at near-annual intervals to track their drinking patterns and symptoms of AUD over time.

King hopes that these results can help improve our understanding of how some individuals have more vulnerability to developing AUD, while others remain social drinkers over their lifespan. She also points out that the results can help to develop better treatments for AUDs and inform earlier interventions for individuals who may be at high risk for developing an addiction.

“I’m already using this information to inform how I talk about addiction with my therapy clients,” King said. “It can be frustrating for them to see other people who can have a couple drinks and just stop there. They can’t understand why they repeatedly seem unable to do that, too, and I tell them, it may be because your brain responds differently to alcohol that makes it harder to stop drinking once you start. Knowing that information can empower a person to make different decisions. Even with our current pandemic, a person may drink to cope with stress or reduce negative feelings, but that doesn’t mean that they don’t also experience the buzz, or pleasurable effects from drinking. This is most concerning for at-risk drinkers as those responses may intensify as they progress with heavier drinking.”

Based on this research, King sees the potential for a sort of “personalized medicine” approach for treating AUDs, describing how sharing an individual’s “thumbprint” response to alcohol can make a difference in how they think about their consumption.

“This could be an opportunity for early intervention, comparable to how someone may get their cholesterol tested and then may be more motivated to change their diet, exercise more or start a medication to rein it in,” King said. “Similarly, knowing one’s acute response to alcohol and how it may indicate a person’s future risk for drinking problems, one may decide to change their drinking on their own or seek help to avoid the progression to addiction.”

Funding: The study, “Subjective Responses to Alcohol in the Development and Maintenance of AUD,” was supported by the National Institute on Alcohol Abuse and Alcoholism (R01-AA013746, R01-AA023839, P60-AA07611, R01-AA025309) and by the National Institute on Drug Abus (T32-DA043469, R01-DA018652). Additional authors include Ashley Vena, Harriet deWit, and Dingcai Cao of the University of Chicago; Deborah Hasin of Columbia University; and Sean J. O’Connor of the Indiana University School of Medicine and Purdue University.

About this alcohol use disorder research news

Original Research: Closed access.
“Subjective Responses to Alcohol in the Development and Maintenance of Alcohol Use Disorder” by Andrea King et al. American Journal of Psychiatry

Alcohol use disorder (AUD) remains an urgent public health problem. Longitudinal data are needed to clarify the role of acute subjective responses to alcohol in the development and maintenance of excessive drinking and AUD. The authors report on 10 years of repeated examination of acute alcohol responses in the Chicago Social Drinking Project.

Young adult drinkers (N=190) participated in an initial alcohol challenge (0.8 g/kg of alcohol compared with placebo) that was repeated 5 and 10 years later. They were also assessed on drinking behavior and AUD symptoms at numerous intervals across the decade. Retention was high, as 184 of the 185 (99%) nondeceased active participants completed the 10-year follow-up, and 91% (163 of 179) of those eligible for alcohol consumption engaged in repeated laboratory testing during this interval.

At the end of the decade, 21% of participants met criteria for past-year AUD. Individuals who reported the greatest alcohol stimulation, liking, and wanting at the initial alcohol challenge were most likely to have developed AUD 10 years later. Further, alcohol-induced stimulation and wanting increased in reexamination testing among those with the highest AUD symptoms as the decade progressed.

Initial stimulant and rewarding effects of alcohol predicted heavy alcohol use, and the magnitude of these positive subjective effects increased over a 10-year period in those who developed AUD compared with those who did not develop the disorder. The findings demonstrate systematic changes in subjective responses to alcohol over time, providing an empirical basis for prevention, early intervention, and treatment strategies.

What Makes Us Human? The Answer May Be Found in Overlooked DNA

Understanding the Molecules and Brain Circuits Recruited by Stressful Experience

Memory Rehabilitation May Be Beneficial for Patients With Multiple Sclerosis