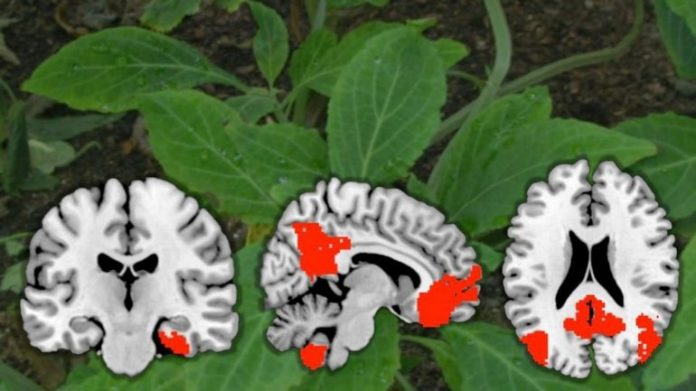 Summary: As with other psychedelics, salvinorin A increased activity across the brain. However, salvinorin A use resulted in more random and disconnected signaling in the default mode network, a brain network associated with relaxing and daydreaming.

Recent interest in developing therapies from hallucinogenic drugs has scientists exploring how these chemicals work in the brain. Recently, Johns Hopkins Medicine researchers imaged the brains of people who had vaped salvinorin A, a drug used in Native Mexican rituals, and found that, like other psychedelic drugs, it increased the communication across parts of the brain.

However, the primary effects of the drug that they observed — as reported in their paper Scientific Reports—suggest that salvinorin A results in more random or disconnected signaling within the default mode network, which is the part of the brain most active when a person is sitting still, relaxing, daydreaming or otherwise not engaged in externally directed mental exercise.

Salvinorin A is a chemical found in the plant Salvia divinorum that produces powerful out-of-body and amnesia-like experiences over a short time frame similar to the effects of nitrous oxide (“laughing gas”), which is used at dental offices.

“Salvinorin A seems to do all the things that researchers believe happen when other psychedelics (such as LSD and psilocybin) act on the brain,” says Manoj Doss, Ph.D.,postdoctoral research fellow at the Center for Psychedelic and Consciousness Research at the Johns Hopkins University School of Medicine.

In the study, 12 men vaped salvinorin A crystals and then were scanned by functional magnetic resonance imaging (fMRI) for the next 15 minutes to measure brain activity across networks in the brain. The researchers evaluated the activity within and among eight brain networks: three involved in vision and five others responsible for moving and touch, processing information from the outside world, paying attention, reward evaluation and activating the default mode network when the mind is at rest.

Most of the fMRI-scanned networks seemed to communicate more with one another when influenced by salvinorin A than when the drug was not present, but they communicated less within themselves. The researchers observed particularly decreased synchronization of the default mode network, meaning that the brain’s electrical signals became more random and unpredictable.

In future experiments, the research team plans to compare these findings about salvinorin A’s impact on the brain with data from imaging done on brains under the influence of other hallucinogenic drugs.

About this psychedelics research news

Salvinorin A (SA) is a κ-opioid receptor agonist and atypical dissociative hallucinogen found in Salvia divinorum. Despite the resurgence of hallucinogen studies, the effects of κ-opioid agonists on human brain function are not well-understood. This placebo-controlled, within-subject study used functional magnetic resonance imaging for the first time to explore the effects of inhaled SA on strength, variability, and entropy of functional connectivity (static, dynamic, and entropic functional connectivity, respectively, or sFC, dFC, and eFC). SA tended to decrease within-network sFC but increase between-network sFC, with the most prominent effect being attenuation of the default mode network (DMN) during the first half of a 20-min scan (i.e., during peak effects). SA reduced brainwide dFC but increased brainwide eFC, though only the former effect survived multiple comparison corrections. Finally, using connectome-based classification, most models trained on dFC network interactions could accurately classify the first half of SA scans. In contrast, few models trained on within- or between-network sFC and eFC performed above chance. Notably, models trained on within-DMN sFC and eFC performed better than models trained on other network interactions. This pattern of SA effects on human brain function is strikingly similar to that of other hallucinogens, necessitating studies of direct comparisons.

Dogs and Their Owners Share a Risk of Developing Diabetes