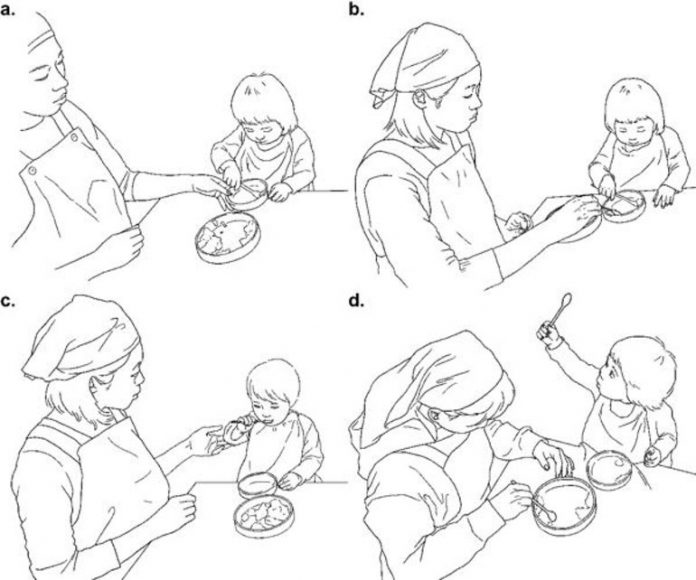 Summary: During mealtimes, a toddler’s gaze toward either the hands or face has different roles in communication.

When toddlers begin to use a spoon to eat by themselves, what kind of interactions occur between them and their caregiver to facilitate this behavior?

An international research collaboration led by Kobe University’s Professor NONAKA Tetsushi (Graduate School of Human Development and Environment) and the University of Minnesota’s Professor Thomas A. Stoffregen investigated the interactions between toddlers learning to use a spoon and their caregivers during mealtimes at a daycare center in Japan.

The research findings were published in Developmental Psychobiology on December 11, 2020.

A 10-month longitudinal observation of 12 toddler-caregiver dyads during mealtimes was carried out at a daycare center in Japan. The onset of independent spoon-feeding was identified for each toddler (mean age: 17.88 months). The researchers then investigated the temporal relationship between the following terms in the video data of mealtimes immediately after this onset: 1. The caregiver’s assistive actions, 2. The toddler’s spoon usage, and 3. The toddler’s gaze towards the caregiver.

Analysis of the results showed that toddlers were more likely than chance to move their spoons towards the food immediately after the caregiver had changed the position of the plates or the food on them in order to give the toddler the opportunity to try to feed themselves. The researchers also found that the amount of time that toddlers spent looking at the caregiver’s hands was significantly longer than the time spent looking at their face. Moreover, toddlers were 8 times more likely to look at the caregiver’s hands than perform any other action when the caregiver was moving items around on the table.

In addition, the researchers found a clear difference between the circumstances in which toddlers looked at the caregiver’s face and the circumstances in which they looked at the caregiver’s hands. Toddlers were most likely to look at the face in order to check whether or not the caregiver was watching their behavior, either after the toddler had fed themselves with the spoon or after they had played with the spoon in a manner unrelated to eating. These incidences of toddlers’ checking caregiver reactions were too numerous to be chance occurrences.

Original Research: Closed access.
“Social interaction in the emergence of toddler’s mealtime spoon use” by Tetsushi Nonaka and Thomas A. Stoffregen. Developmental Psychobiology

Social interaction in the emergence of toddler’s mealtime spoon use

The use of a spoon for eating is among the important daily skills in early development. The article provides an analysis of how caregiver–toddler interactions guides the attention of toddlers who were first learning how to use a spoon to spoon‐related action opportunities that were relevant to the mealtime context. Our analysis revealed several related results. First, caregivers often manipulated objects on the table (i.e., food and dishes), and toddlers were more likely than chance to use their spoon to contact food immediately after watching these caregiver manipulations. Second, toddlers looked more often at the caregiver’s hand than at their face. Third, toddlers tended to look at the caregiver’s hand when the caregiver was manipulating objects on the table, and after these looks, toddlers were more likely than chance to contact food with their spoon. Finally, the toddlers’ choices about when to look at the caregiver were influenced by their own behavior, as if they wanted to know how the caregiver would react to what they had done. We discuss these results in terms of the learning of socially promoted action opportunities for meal‐related spoon use.

Living Near Water Can Be Beneficial to Your Mental Health

It’s In Your Head: Why Reducing All Problems to ‘Mental Health Issues’ Hurts Humanity