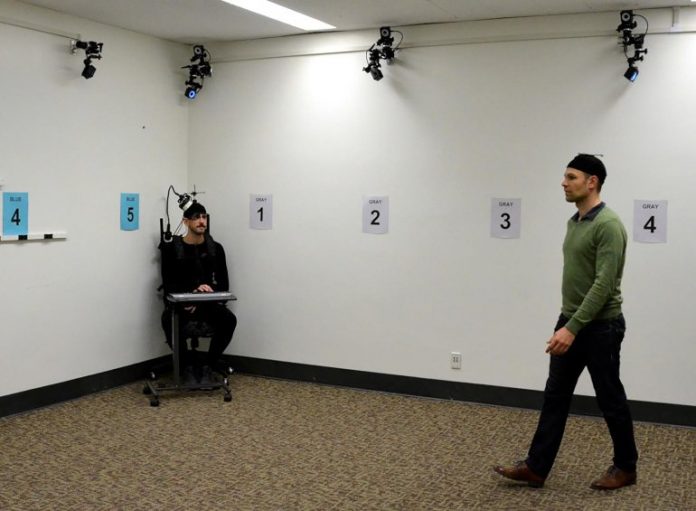 Summary: Study reveals how our brains navigate physical spaces and how we are able to keep track of other people’s locations.

For the first time, scientists have recorded how our brains navigate physical space and keep track of others’ location. Researchers used a special backpack to wirelessly monitor the brain waves of epilepsy patients as each one walked around an empty room hunting for a hidden, two-foot spot.

In an article published in Nature, the scientists report that the waves flowed in a distinct pattern suggesting that each individual’s brain had mapped out the walls and other boundaries.

Interestingly, each participant’s brain waves flowed in a similar manner when they sat in the corner of the room and watched someone else walk around, suggesting these waves were also used to track other people’s movements. The study was part of the NIH’s Brain Research through Advancing Innovative Neurotechnologies® (BRAIN) Initiative.

“We were able to directly study for the first time how a person’s brain navigates an actual physical space that is shared with others,” said Nanthia Suthana, Ph.D., an assistant professor of neurosurgery and psychiatry at the David Geffen School of Medicine at the University of California, Los Angeles (UCLA) and senior author. “Our results suggest that our brains may use a common code for knowing where we and others are in social settings.”

Dr. Suthana’s lab studies how the brain controls learning and memory. In this study, her team worked with a group of participants with drug-resistant epilepsy, 31-52 years old, whose brains have been surgically implanted with electrodes to control their seizures.

The electrodes reside in a memory center in the brain called the medial temporal lobe, which is also thought to control navigation, at least in rodents. Over the past half century, scientists, including three Nobel Prize winners, discovered – in experiment after experiment – that neurons in this lobe, known as grid cells and place cells, act like a global positioning system. Moreover, the scientists found that low frequency waves of neural activity by these cells, called theta rhythms, help rodents know where they and others are while running through a maze or swimming around a shallow pool of water.

“Several pieces of indirect evidence support the medial temporal lobe’s role in how we navigate. But testing these ideas any further has been technically difficult,” said Matthias Stangl, Ph.D., a postdoctoral scholar at UCLA and the lead author of the article.

This study provides the most direct evidence to date supporting these ideas in humans and it was made possible by a special backpack which Dr. Suthana’s team invented as part of an NIH BRAIN Initiative project.

“Many of the most important breakthroughs in brain research have been sparked by technological advances. This is what the NIH BRAIN Initiative is all about. It challenges researchers to create new tools and then use those tools to revolutionize our understanding of the brain and brain disorders,” said John Ngai, Ph.D., director of the NIH’s BRAIN Initiative.

At its core, the backpack contained a computer system which can wirelessly connect to the electrodes surgically implanted in a patient’s head. Recently, the researchers showed that the computer can simultaneously be hooked up to several other devices including virtual reality goggles, eye trackers, and heart, skin, and breathing monitors.

“Until now the only ways to directly study human brain activity required a subject to be still, either lying in a massive brain scanner or hooked up to an electrical recording device. In 2015, Dr. Suthana came to me with an idea for solving this problem and so we took a chance on making a backpack,” said Uros Topalovic, M.S., a graduate student at UCLA and an author of the study. “The backpack frees the patient and allows us to study how the brain works during natural movements.”

To examine the role the medial temporal lobe plays in navigation the researchers asked the research participants to put on the backpack and enter an empty 330-square-foot room.

Each wall was lined with a row of five colored signs numbered 1 through 5, one color per wall. Through a ceiling mounted speaker, a computerized voice asked the patient to walk to one of the signs. Once they arrived at the sign the voice then asked them to search for a two-foot in diameter spot hidden somewhere in the room. Meanwhile the backpack recorded the patient’s brain waves, paths through the room, and eye movements.

Initially, each person needed several minutes to find the spot. During subsequent trials, the time shortened as their memory of the spot’s location improved.

The electrical recordings revealed a distinct pattern in brain activity. The theta rhythms flowed stronger – with higher peaks and lower valleys – when the participants approached a wall than when they wandered in the middle of room. This happened exclusively when they were searching for the spot. In contrast, the researchers saw no correlation between theta rhythm strength and location when the participants followed directions for walking to the colored signs on the wall.

“These results support the idea that under certain mental states theta rhythms may help the brain know where boundaries are located. In this case it’s when we are focused and searching for something,” said Dr. Stangl.

Further analysis supported this conclusion and helped rule out the possibility that the results were caused by other factors, such as activity associated with different eye, body, or head movements.

Curiously, they saw similar results when the participants watched someone else search for a spot. In these experiments, the participants would sit on a chair in the corner of the room with their backpacks on and their hands resting near a keyboard. The patients knew the location of the hidden spot and they pressed a button on the keyboard whenever the other person arrived at it.

Again, the participant’s brain waves flowed strongest when the other person either neared a wall or the spot and this pattern only appeared when the person was on the hunt rather than following specific directions.

“Our results support the idea that our brains may use these wave patterns to put ourselves in another person’s shoes,” said Dr. Suthana. “The results open the door to helping us understand how our brains control navigation and, possibly, other social interactions.”

Dr. Suthana’s team plans to explore these ideas in greater depth. In addition, the team has made the backpack available to other researchers who want to learn more about the brain and brain disorders.

This year more than 175 research groups have received funding from the NIH in support of a wide variety of projects ranging from mapping the neural circuits that control what an octopus sees to helping people paralyzed by spinal cord injuries regain movements by upgrading computer programs that drive neural stimulation devices.

Funding: These studies were supported by the NIH (NS103802), the McKnight Foundation (Technological Innovations Award in Neuroscience) and the Keck Junior Faculty Award.

About this navigation and neuroscience research news

Everyday tasks in social settings require humans to encode neural representations of not only their own spatial location, but also the location of other individuals within an environment. At present, the vast majority of what is known about neural representations of space for self and others stems from research in rodents and other non-human animals1,2,3. However, it is largely unknown how the human brain represents the location of others, and how aspects of human cognition may affect these location-encoding mechanisms. To address these questions, we examined individuals with chronically implanted electrodes while they carried out real-world spatial navigation and observation tasks. We report boundary-anchored neural representations in the medial temporal lobe that are modulated by one’s own as well as another individual’s spatial location. These representations depend on one’s momentary cognitive state, and are strengthened when encoding of location is of higher behavioural relevance. Together, these results provide evidence for a common encoding mechanism in the human brain that represents the location of oneself and others in shared environments, and shed new light on the neural mechanisms that underlie spatial navigation and awareness of others in real-world scenarios.

Shared Underlying Pathways Found for Fatigue and Depression in MS