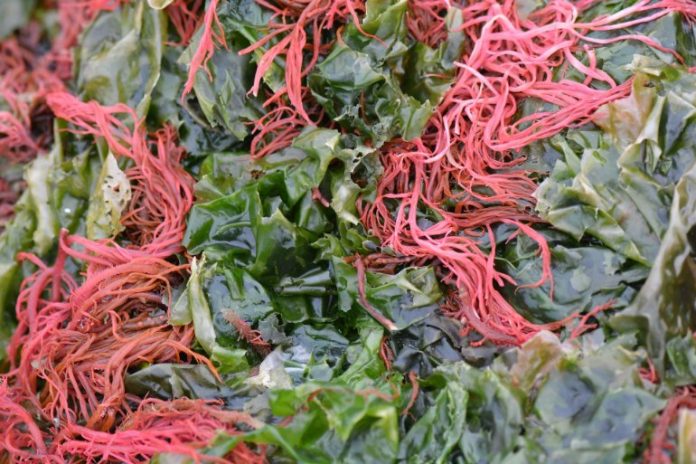 Carrageenans, biologically active polysaccharides isolated from red algae and widely used in the food industry as stabilizers, thickeners, or jelly agents have an express effect on the immune systems of mice, a study reports.

The research was carried out by scientists from the School of Biomedicine of Far Eastern Federal University (FEFU), Far Eastern Branch of the Russian Academy of Sciences, and Vilnius University.

A related article appears in the Journal of Biomedical Materials Research.

“The fact that carrageenan demonstrates immunosuppressive properties in a particular case does not make it generally dangerous or toxic though”, says Aleksandra Kalitnik, one of the research authors, an Assistant Professor at the Department of Pharmacy and Pharmacology, FEFU School of Biomedicine.

The research reveals that carrageenans and the products of their partial degradation with low molecular weight are not pharmacologically inert. On the contrary, they are capable of suppressing the immune system. After adding carrageenans to the diet of lab mice for one week, the activity of their congenital immunity cells reduced and leukocyte count dropped.

The paper leaves many questions unanswered, but one thing is clear: although carrageenans are a permanent component of the human diet, their medical potential is extremely underestimated.

“Immunosuppressants are used to treat different disorders, such as allergies and autoimmune diseases: multiple sclerosis, systemic lupus erythematosus, rheumatoid arthritis, systemic scleroderma, dermatomyositis, and others. Usually, these diseases are associated with the hyperactivation of some parts of the immune system and/or with the reduced production or functional activity of immunosuppressive cells. A misbalance between inflammation and suppression may lead to the development of an excessive immune response to a patient’s own antigens. Currently, we cannot confirm carrageenans are immunosuppressants. However, we established they are able to suppress the activity of peritoneal phagocytes (abdominal immune cells) in mice. It is still unclear whether it is for good or bad. Certainly, it can be beneficial for some conditions associated with immune system hyperactivation,” says Aleksandra Kalitnik.

According to the scientist, it is too soon to start thinking about the development of a carrageenan-based immunosuppressive drug. The biological properties of carrageenans require further fundamental research that might take years.

The team believes that red algae polysaccharides can react with cell receptors directly (in case of in vitro experiments) or indirectly (when taken orally). Namely, they react with the receptors of immune cells in the gastrointestinal tract that, in turn, pass the information on to the immune cells of the blood.

“We would like to find out the way carrageenans influence cell receptors and signal paths that are involved in increasing and decreasing the leukocyte level. Such a study would help us better understand the potential of carrageenans as pharmacological substances or bio-additives that could reduce immune system hyperactivation. At the current stage, we only observed the effect of immunosuppression, namely the reduction of leukocyte count and activity,” added Aleksandra Kalitnik.

The study did not cover the carrageenans that are used in the food industry and consumed by people. Food carrageenans have to meet strict requirements, including the maximum allowed molecular mass and dosage. The dosages of food carrageenans are lower than those used in the experiment by several orders of magnitude. Moreover, food products do not contain pure carrageenan. It is consumed together with proteins and other substances that considerably affect its properties.

“The microbial populations of the gastrointestinal tracts of mice and men are quite different, and carrageenan might have no suppressing effect on the human immune system. To put it simply, carrageenan can become an immunosuppressor if needed and demonstrate immune-modulating properties in other cases, supporting the natural protective functions of the body. This fact is confirmed by some experimental data,” concluded Aleksandra Kalitnik.

Funding: The work was supported by the Russian Foundation for Basic Research (FRBR, 18-04-00430?). The study was a result of a collaboration between the FEFU School of Biomedicine, Department of Natural Sciences of Vilnius University, and Zhirmunsky Institute of Marine Biology of the Far Eastern Branch of the Russian Academy of Sciences.

About this immune system research news

Ability of high molecular weight (HMW) κ‐ and λ‐carrageenans of the red marine algae Chondrus armatus and their low molecular weight degradation products (LMWDPs) (0.7–20 and 10–170 kDa respectively) to influence functional properties (motility and phagocytosis) of murine peritoneal macrophages was assessed in this study as an in vitro and a weeklong feeding experiment. We demonstrated that, with an exception of one, all carrageenan samples at 100 μg/ml increased cellular motility and dose‐dependently decreased phagocytic activity; LMWDPs of λ‐carrageenan suppressed motility and had no effect on phagocytosis. Oral administration of all the carrageenan samples at 100 μg/kg/day for 7 days to mice had no effect on their clinical appearance, body weight, weight of their liver, spleen or thymus or development of noticeable changes to their inner organs. All samples induced a shift of the cell composition of the peritoneal cavity towards macrophages. Consumption of LMWDPs of κ‐carrageenan resulted in development of leukopenia, however, no changes to relative WBC count were introduced by either of the samples. All samples decreased murine peritoneal macrophages phagocytic activity, with λ‐samples possessing higher efficacy than their κ‐counterparts; all LMWDPs stimulated peritoneal macrophages motility, with κ‐samples possessing higher efficacy than their λ‐counterparts In conclusion, we have shown that κ‐ and λ‐carrageenans of the C. armatus and their LMWDPs suppress phagocytotic activity of peritoneal macrophages under both in vitro and in vivo conditions. This allows them to be viewed as pharmacologically active substances andpropagates the need for their further investigation as such.