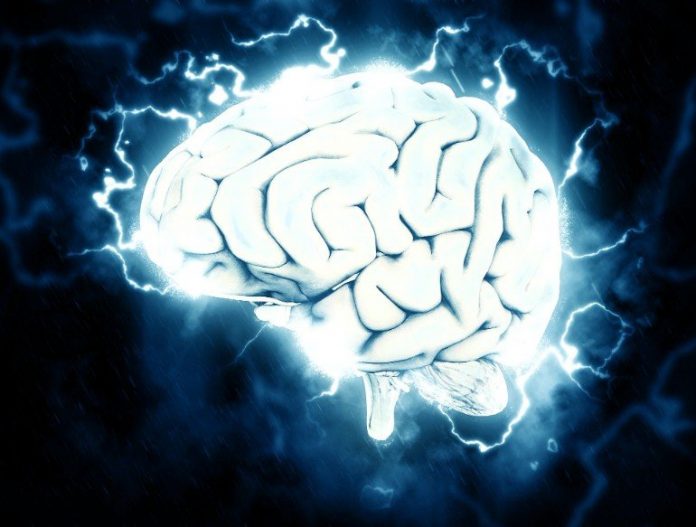 Summary: Plumes of glutamate in the brain could explain the onset of migraines with auras, a new study reports.

Massive “plumes” of glutamate, a key neurotransmitter, surging in the brain could help explain the onset of migraine with aura–and potentially a broad swath of neurologic disease, including stroke and traumatic brain injury–according to an international study led by University of Utah Health scientists.

The study, which was conducted in laboratory mice, found that an abnormal release of glutamate into the extra-cellular space–the area between brain cells–can spark spreading depolarizations, tsunami-like waves of activity that spread across the brain in migraine and other nervous system disorders.

“This is something new under the sun,” says K.C. Brennan, M.D. a U of U Health professor of neurology and the study’s co-corresponding author (with Dr. Daniela Pietrobon of the University of Padova in Italy). “Glutamate plumes are a completely new mechanism of migraine, and it’s a good bet that they are players in other diseases of the nervous system.”

The study appears in Neuron. In addition to U of U Health and Padova scientists, researchers from the University of New Mexico and the Universita Politecnica delle Marche in Italy contributed to this work.

Like many discoveries, this one was a bit serendipitous. Lead author Patrick Parker, Ph.D., then a graduate student in the Brennan lab, was studying abnormalities in glutamate signaling in mice carrying a human gene that leads to a condition called familial hemiplegic migraine type 2 (FHM2).

Glutamate is an essential neurotransmitter that is released as a signal between nerve cells. But too much glutamate can overexcite cells and damage them, so the brain has evolved ways to limit its effects.

Previous work in Italy found that the FHM2 mutation slows the rate of glutamate removal from the extracellular space, leading to excessive activity of brain networks. But what Parker and his team found in this current study was surprising: large plumes, or puffs of glutamate release, that appeared spontaneously and seemed to spread from a central location.

“Everything I’d read about neural glutamate signaling told me the plumes shouldn’t be there,” Parker says. “It wasn’t exactly a ‘eureka’ moment. More like, ‘What the heck was that?’”

Intrigued, the researchers delved deeper, discovering that plumes arose from a dysfunctional interaction between neurons and astrocytes. Astrocytes are specialized brain cells that, among other things, help control glutamate levels. The researchers determined that either too much neuronal release of glutamate, or too little astrocyte uptake, could lead to plumes.

“The common denominator is an imbalance between release and reuptake and an excess of glutamate in the extra-cellular space,” Brennan says.

Once the researchers better understood how plumes were generated, they wanted to know how these plumes affected brain disease. They found that a flurry of plumes preceded the onset of spreading depolarizations.

To understand spreading depolarizations, imagine a chain reaction, started by a nerve cell firing massively. As it fires, the cell releases large amounts of glutamate (and other substances), enough to cause neighboring neurons to fire. They in turn cause their neighbors to fire, and a wave of firing (or depolarization) sweeps through the brain, moving outward like a ripple in a pond, or a tsunami from an earthquake.

Spreading depolarizations are not as well-known as seizures, the more famous excitable event of the brain. But they are just as common–and under certain conditions, like stroke, subarachnoid hemorrhage, and traumatic brain injury, they can be just as damaging.

Parker and colleagues found that plumes predicted the onset of spreading depolarizations, and that preventing plumes inhibited them.

“This shows that plumes don’t just coincide with spreading depolarizations,” Parker says. “They are involved in their generation.”

Moving forward, the team wants to deepen its understanding of plumes in migraine. “There is an emerging theme of impaired control of glutamate by various means in migraine, and plumes add compellingly to that story,” Parker says.

But the researchers also want to directly test whether glutamate plumes are involved in other neurological disorders, with an eye toward treatments that might be relevant to multiple diseases.

“We have our work cut out for us,” Brennan says. “But when Mother Nature throws you this kind of curveball, you have to follow up on it.”

In addition to Drs. Brennan and Parker, P.A. Sawant-Pokam, P. Suryavanshi, D. Kaufman, and J.J. Theriot of U of U Health contributed to this study.

Funding: The research, published as, “Non-canonical Glutamate Signaling in a Genetic Model of Migraine with Aura,” was supported by the National Institutes of Health, the National Science Foundation, and the the Telethon Foundation.

Original Research: The study will appear in Neuron

Research Delves Into Link Between Test Anxiety and Poor Sleep

Supernumerary Virtual Robotic Arms Can Feel Like Part of Our Body