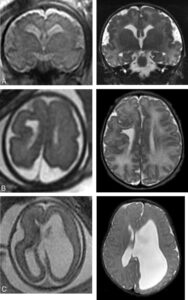 We identified all fetal MR imaging performed at the Children’s Hospital of Eastern Ontario during a 10-year period and assessed agreement between prenatal prognosis and postnatal outcome. Prenatal prognosis was determined by a pediatric neurologist who reviewed the fetal MR imaging report and categorized each pregnancy as having a favorable, indeterminate, or poor prognosis. Assessment of postnatal neurodevelopmental outcome was made solely on the basis of the child’s Gross Motor Function Classification System score and whether the child developed epilepsy. Postnatal outcome was categorized as favorable, intermediate, or poor. We also assessed the diagnostic accuracy of fetal MR imaging by comparing prenatal and postnatal imaging diagnoses.

We reviewed 145 fetal MR images: 114 were included in the assessment of diagnostic accuracy, and 104 were included in the assessment of prognostic accuracy. There was 93.0% agreement between prenatal and postnatal imaging diagnoses. Prognosis was favorable in 44.2%, indeterminate in 50.0%, and poor in 5.8% of pregnancies. There was 93.5% agreement between a favorable prenatal prognosis and a favorable postnatal outcome.

A favorable prenatal prognosis is highly predictive of a favorable postnatal outcome. Further studies are required to better understand the role of fetal MR imaging in prognosticating postnatal development, particularly in pregnancies with indeterminate and poor prognoses.

Now’s the Time to Help Your Patients Quit Smoking