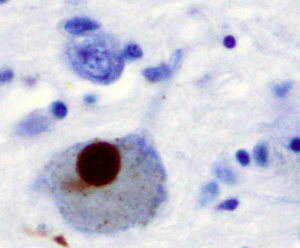 The brain-gut axis has become a well-recognised cliche, and for very good reasons. Possessing an  almost independent and complex nervous system, the gut is considered to be the ‘second brain‘. The gut of course coordinates things hand-in-hand with the brain with which it communicates via the vagus nerve; through this it not only determines our body balance or homeostasis, but also rules our emotions and guides our decision-making. But some scientists are beginning to think that the brain-gut axis, or more appropriately the gut-brain axis, has a dark side, and this is the simple idea that ‘very bad things‘ in the gut can smuggle their way into the brain by latching on to the vagus nerve. The gut-brain axis may therefore be the seditious agent of neurological ruin by acting as a Trojan horse which surreptitiously jumps over the brain’s elaborate defensive big wall.

Parkinson’s disease (PD) is perhaps the most illustrative example of the consequence of the treacherous behaviour of the gut-brain axis. Some researchers are now convinced that PD actually starts in the gut and, like an undesirable hitchhiker, fastens itself on the vagus nerve as it meanders its way up to the brain. This migration hypothesis is not a fanciful notion but an idea founded on sound facts. For example, take the observation that the guts of people with PD are riddled with α-synuclein, the misfolded protein that is thought to cause PD by disabling the basal ganglia. The story, according to researchers, is that α-synuclein first accumulates in the gut and, feeling cramped, seeks greener pastures. It therefore propagates up the vagus nerve, in ‘prion-like‘ fashion, to get to the brain. Further support for this theory is the observation that people who have had their vagus nerves resected (that’s another story) have a much lower risk of developing PD.

That’s just as well you may say, but where does the appendix come into all this? I admit the so-called vermiform or worm-like appendix is not a structure that readily comes to mind when one thinks of the gut-brain axis. Apart from being the seat of the dreaded appendicitis, it was considered to be just a useless appendage, nature’s trick on anatomists and physiologists. As diminutive as it may be however, it is part of the gut, and as it turns out, it is heavily laden with α-synuclein in people with PD. Furthermore, it has been shown that people who have had an appendicectomy, or appendectomy if you prefer, have a much lower risk of developing PD. We know this because of researchers such as Bryan Killinger and colleagues who, in their paper titled The vermiform appendix impacts the risk of developing Parkinson’s disease, published in the journal Science Translational Medicine in 2018, found that “early removal of the appendix is associated with a reduced risk of developing PD”. And it all comes down to the powerful immune surveillance function of the appendix which, it seems, mops up all sorts of threats that find their way into our guts. You may say that the appendix is punching way beyond its weight class.

As happens to all beautiful theories, they often come up against some immovable objections….and there are quite a few raised eyebrows at the appendix-PD hypothesis. For one, many studies have just not been able to confirm it. For example, take this paper published in the journal Movement Disorders in 2018, titled Appendectomy and risk of Parkinson’s disease in two large prospective cohorts of men and women; the authors disappointingly found little or no evidence for the association between having an appendectomy and the risk of developing Parkinson’s disease. Another paper published in the same journal in 2016, titled Appendectomy and risk of Parkinson’s disease: A nationwide cohort study with more than 10 years of follow‐up, further upturned the applecart because the authors found that having an appendectomy actually increased the risk of developing PD. Another paper from a 2017 issue of the Journal of Parkinson’s Disease was succinctly brutal in shooting down the appendix-PD connection with its title: Appendectomy history is not related to Parkinson’s disease. Even more damning to the “appendectomy is good against PD” theory is this 2019 study whose blazing headline is Parkinson’s disease is more prevalent in patients with appendectomies. Just when you were beginning to feel good about having your appendix removed all those year ago!

So, is the appendix a hero or a villain in the PD saga? Does it defend the brain from PD by mopping up α-synuclein, or is it the source of all the problems that α-synuclein presumably causes? Or are both the appendix and α-synuclein just innocent by-standers, ring-side onlookers, collateral damage in a disease process that defies all explanations? There will surely be more to come on this topic but, in the meantime, why not explore our previous PD blog posts:

Journal Scan – This Month in Other Journals, January 2021

Grid cells come into play when the imagination runs away | Science

Shining a Light on Numbers Needed to Treat (NNT)