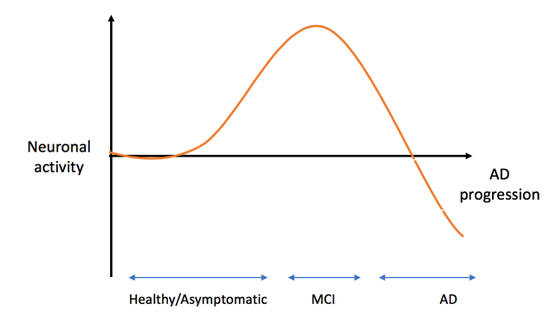 Fifty million people live with dementia worldwide, the most common cause of which is Alzheimer’s – a progressive, neurodegenerative disease. Although the past 12-months have seen Aducanumab expediated for FDA approval – the first new drug with the potential to reduce cognitive symptoms in over 15 years, we’re still without a treatment capable of reversing or slowing the progression of Alzheimer’s Disease. Consequently, early prevention is a top priority, with our research at Sussex exploring new avenues to mitigate risk in individuals with a genetic susceptibility for future Alzheimer’s Disease.

Specifically, we will be investigating brain hyperactivity as a marker of Alzheimer’s Disease risk, proxied using functional magnetic resonance imaging (fMRI) which measures how much oxygen is delivered to specific brain regions in support of various cognitive processes. Individuals with emerging Alzheimer’s Disease show brain hyperactivity across the network of regions which support memory, including in a structure called the hippocampus. This is followed by a period of hypoactivity as the disease develops. Whilst increased activation was first thought to be a strategy the brain uses to help overcome Alzheimer’s related damage, growing evidence suggests hyperactivity drives disease progression, highlighting an exciting new target for preventative interventions.

Like Alzheimer’s Disease, epilepsy is characterised by aberrant patterns of brain activity. Supporting the potential for treatment overlap, administering a very low-dose of a well-tolerated, anti-epileptic – Levetiracetam, is reported to decrease brain hyperactivity in adults with Mild Cognitive Impairment, a diagnosis which often precedes progression to Alzheimer’s Disease. This pharmacological manipulation was associated with improved memory performance, motivating a number of clinical trials to investigate the clinical benefit of Levetiracetam for reducing the symptoms of Alzheimer’s Disease. Repurposing existing drugs in this way offers a number of advantages; being much more cost-effective than the development of new compounds, with the potential for more rapid translation from the lab to current healthcare practice.

Our ongoing research, funded by Alzheimer’s Society, explores brain hyperactivity in carriers of an APOE e4 allele – the strongest genetic risk factor for sporadic Alzheimer’s Disease, found in ~ 20% of the population. This gene is an important target for early life intervention as e4 differences in brain function and cognition are reported from youth, with my doctoral research establishing the onset of subtle cognitive disadvantages by the end of the 5th decade. Critically, young and middle-aged APOE e4 carriers show increased activation across the same network of memory-associated brain regions as individuals in the very earliest stages of Alzheimer’s Disease, highlighting an exciting new avenue for lifespan risk reduction.

In a series of studies at the University of Sussex, we will be establishing how the cognitive consequences of brain hyperactivity changes across the lifespan in e4 carriers. In addition, we will test for the first time if a very low dose of Levetiracetam can reduce patterns of hyperactivity in mid-age e4 carriers, using this manipulation to more directly test how aberrant brain activation patterns contribute to the emergence of cognitive disadvantage in this ‘at-risk’ group. By focusing on risk reduction earlier in the lifespan, this research contributes to the discussion between scientists, clinicians and policy-makers around how we identify individuals at greater risk for Alzheimer’s Disease prior to symptom onset, and best utilise our advancing knowledge for individualised risk management. A recent Lancet commission reports 40% of dementia cases can be prevented or slowed through lifestyle management; a personalised approach to medicine which additionally considers an individual’s genetic make-up may further reduce the emergence of Alzheimer’s Disease dementia.

Dr Claire Lancaster is an Alzheimer’s Society Research Fellow working as part of the Behavioural and Clinical Neuroscience group.

How to Help Someone with Postpartum Depression

How to be a Good Internal Consultant