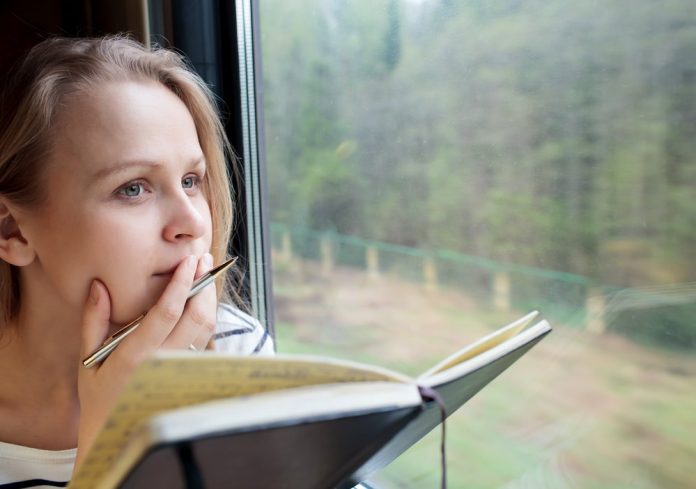 Everything changed for me when I was 13, when I had my first episode of Bipolar Disorder. At the time, I didn’t realize what was happening, only that my body was filled with a newfound sexuality and powerful emotions that neither I nor my bemused and tearful mother could interpret. I remember running to her room in the middle of the night, sobbing about how beautiful life was. “I feel like a poem,” I said.

I marched to a teacher’s house and confronted him about taking a book from my friend, and confessed to another teacher that I just didn’t feel like myself. “Where is your compass?” she asked me. I told family and friends about sex and how enjoyable masturbation was, and even had a vision of Jesus standing by my bed, watching as I touched myself. I didn’t eat for long periods of time, feeling that I didn’t need to. I thought this was the reason I felt so strangely exhilarated and wild; my mother thought it was my period, which had just started.

What had also started was weekends at my father’s, a train ride away. While my brother and I were there, my father could not often control his blood sugar, which meant that I monitored him around the clock for symptoms of low blood sugar, often holding myself awake at night, ears peeled for a sign that all was not right and that I needed to get him some juice. As a Type 1 diabetic, he could spiral into frightening episodes. I believe that my anxiety around looking after him and the change of location every week, along with my parents’ divorce, caused my first episode. Now, it causes me anguish and anger to think about my innocent 13-year-old self being made to handle such adult situations all alone.

My mother did the only thing that she could think of and took me to see a family therapist, who diagnosed me with Bipolar Disorder within the hour. I spent the next two weeks at a psych hospital for children, where a regular routine, a diet of fried food and 1% milk, and the welcome company of other children made a haven for me, a haven that I want every time I’ve had to return to the hospital in recent years. That first time, I had brought my journal, which I’d named Molly, with me, and the counselors gave me a felt-tip pen to write with. I wrote almost every day my observations on the others in the “cottage,” about my friend Hayden, and about the new girl who came suddenly in the middle of the night:

We had our seats together, and we were just sitting there this morning. I don’t remember what we were talking about, and then she leaned in and said, in a low voice, ‘My dad raped me on Monday.’

I felt like something very heavy had been swung into my chest, leaving me winded. I did not draw breath for a few seconds. Then I said, ‘Oh my gosh.’ I hope the horror of what she had said showed in my face.

I generally regarded my first hospitalization as an adventure in order, to create some kind of normalcy and optimism while I was there, but there were moments such as these that I slammed into, leaving me horror-struck with the truth of others’ experiences.

Out of the hospital, I did as doctors instructed me: took my medication religiously, noting down every feeling that could possibly be a symptom, including the crush that I had on my math tutor — was this hypersexual behavior? Looking at my notebook now, I can see that it is filled with small-script accounts of everything my body and mind were doing. I was terrified of going into another episode, of doing those weird things that I had done the first time. Thus I spent my adolescence overmedicated, falling asleep in my therapist’s office in the middle of a session.

Surrounded by this fog, I could not reach out to my high school classmates and spent the time largely isolated from my peers. It was then that I developed the idea that I was “weird.” I had become my diagnosis. I remember telling some of my peers about the hyper-religiosity that accompanied my Bipolar Disorder, and the blank silence that followed. It was my big secret, and I remember railing against the stigma of it in a therapy appointment. Why did people turn away from me when I told them?

I found solace in creative forms of writing. I have always written, ever since I was 10 years old — stories and observations about myself and other, made-up realms. So it came as little surprise but a great deal of delight when, at the age of 15, I had my first dream about my first male main character, Arthur. His name was not Arthur as yet, and in the dream, he and a friend were asking their teacher how to return old people’s “essences” to them. (They had been taken away and were stored in vials in a vault.)

And so “Essence Story,” my first science fiction novel, was born, and my relationship with Arthur began. Arthur was 13, I eventually decided — the same age I was at the time of my first hospitalization. He was full of hot emotions that the authorities of the city had to control, and not only that, but he and the other 13-year-olds must undergo an operation that removes emotion from their brains completely.

It wasn’t until my first year of college that I had another episode, and not until my second year that I decided to go off medication without telling anyone. I went off because I was out of lithium and hadn’t yet gotten the refill in the mail. I figured I would be fine because I only had to wait a few days.

I remember the feeling of absolute clarity, like a channel of light through my brain. It was like what I imagined the “high” of recreational drugs to be. And suddenly, I had no fear about going off the medication, because I knew what would happen now — more hallucinations, including a lion that padded beside me and lay on my chest at night, of my 13-year-old self asking me to do right by her.

While I was in this state, I also wrote more than I had in a long time about the pain that I’d felt throughout my childhood — the pain of my father’s diabetic episodes and of my parents’ divorce. I wrote about the great rage I felt against them, the wrongness I felt welling within me. By writing, I knew, I was pulling out some kind of thorn that had been stuck in me for a long time, and healing the wound. Perhaps, I told myself, I was even going to the center of what had caused my first episode to begin with.

Over the next year, I started taking lithium again and took time off from school to recover from another episode. During that summer, with the help of a naturopath, I successfully titrated down on my lithium. I felt my energy return, like air hissing out of a valve that had been rusted shut. Every morning I rose early and wrote for two hours, reveling in the abundance of creativity crashing over me — almost more ideas than I could handle.

For the first time, I felt that I was living my lost teenage years. I started to rethink my experience at 13. I now believe that what was then labeled as “bipolar” was really high anxiety coupled with hormones, and that if my family had had different resources, I might have been saved from years of taking medication. Instead of medicine and hospitalization, I might have had a more holistic treatment early on and not lost my energy and sociability. It is hard to predict, of course, but I believe that I would have been a different person if I hadn’t started medication so young. Medication sometimes helped me, but I am afraid of the impact it will, and already does, have on my body.

I continued to work on my novel. As I got to know Arthur even more and he solidified in my psyche, I was able to go on walks with him and have long conversations. This relationship with my creation was separate from the story I was writing about him. I have come to feel toward Arthur what you might feel toward a beloved child, or a friend who was born from the place where your heart and soul meet with imagination. I am proud of him and love him dearly as a real person. I now believe that he came from that place of subconscious anguish that I felt at having my intense emotions dulled at their peak by medication. When I heard voices, Arthur heard voices, and it became clearer and clearer that he is my animus, the version of me that escapes the hospital and the city without compromising his sovereignty.

Writing the novel became therapy for me, an outlet for processing my own experiences. I wrote about doctors who write down emotions such as normal anger or sadness as if they are symptoms of mental illness. Arthur’s anger at the medical system in his world echoed my own feelings of resentment at the many doctors I’ve had, all with different ideas about my well-being. I have felt used, experimented on — “Here, let’s try a dose so high that you feel drugged. No, how about this, a dose of lithium that makes you feel like you are on edge constantly?” Even though I know that psychiatrists are stuck in the system almost as much as the patients, it is hard not to feel anger toward my doctors for relating to me not as humans but as medication-dispensers—which is what they were, largely, until I finally started seeing the naturopath. Though I accept the diagnosis I carry, I am working on going down to the lowest dose of lithium that works for me.

For me, writing and the relationships I have with the characters I’ve created have been the best medicine. I am here to tell you that it is a powerful tool for wellness and healing, whether that involves an escape into science fiction or simply putting your dreams, emotions, memories, and observations on paper. I am now offering a Mental Healing Writing Course for anyone who wants to tap into the wellspring of creativity and truth already within you. We will be doing simple writing exercises for the most part, and of course creating fiction too, finding characters from our subconscious and getting to know them in the context of our own stories. The classes will take place Sundays at 6 p.m. over Skype. Join me for an adventure inward! I can be reached at [email protected]

Neurons That Respond to Touch Are Less Picky Than Expected