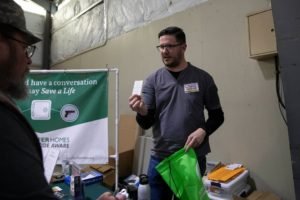 From The New York Times: “The concern about suicides has led to an unusual alliance between suicide-prevention advocates and gun-rights proponents; together they are devising new strategies to prevent suicide in a population committed to the Second Amendment and the right to bear arms.

. . . Dr. [Jennifer Stuber, an associate professor of social work who helped found the University of Washington’s Forefront Suicide Prevention center] says, firearm retailers are important allies in suicide-prevention efforts. A study she co-authored found that once gun retailers learned about the risks to their community, they were more willing to get involved and integrate information about suicide prevention into firearm safety training.

Mr. Aposhian, of the Utah Shooting Sports Council, is a prime example. When his own research confirmed what a local legislator, Steve Eliason, had told him — that 85 percent of gun deaths in Utah were suicides — he had ‘an epiphany of sorts,’ he said.

‘That was our family, our friends, our neighbors, our co-workers,’ Mr. Aposhian said. ‘Utah has very permissive gun laws, but we also have a very low homicide rate. What we didn’t realize was we have a huge suicide rate.’”

You are Invited to Body Full of Joy – Positive Psychology News