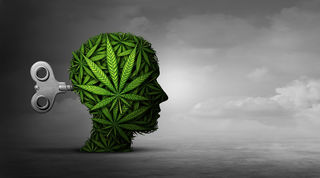 We present this post in honor of SAMHSA’s National Prevention Week (May 10-16, 2020) to raise awareness about the importance of substance use prevention and positive mental health.

As the most commonly used illicit drug among U.S. teens and adults, it should be no surprise that many teens perceive marijuana (cannabis) use as harmless. Some teens believe this because it is natural, used for medicinal purposes, and has been legalized in several states. Yet exposure to cannabis during adolescence is shown to affect brain functioning related to learning, memory, and judgment. Further, research studies are showing a link between cannabis use and the development of psychosis.

Many teens who smoke marijuana may use it to alleviate symptoms of anxiety, depression, and insomnia. What they may not know is that continued use of marijuana can actually exacerbate these symptoms and increase their risk of developing an addiction. Along with the rising trend in vaping THC oil, “dabbing” (highly concentrated THC wax or oil), edibles, and other THC-infused products, teens are being exposed to THC at high levels, making them even more vulnerable to disruptions in brain development and psychological issues, including psychosis.

Psychosis is characterized by symptoms of hallucinations (false perceptions) and/or delusions (false beliefs) amongst other symptoms including thought disorders, disorganized behaviors, and catatonia (abnormal movement or mobility). The onset of psychosis is typically preceded by a prodromal period where non-psychotic symptoms are present (e.g., social withdrawal and bizarre or suspicious behavior). It is important to emphasize that the presence of psychosis does not always lead to a schizophrenia diagnosis. Psychotic symptoms may accompany a number of other mental illnesses including depression, anxiety, PTSD, and ADHD.

What the research suggests

Adolescence is a particularly vulnerable stage of development in regards to brain functioning and exposure to cannabis. Though it is difficult to prove how much cannabis or what frequency of cannabis use will lead to the onset of psychosis, what we do know is cannabis use during adolescence coupled with genetic vulnerability is correlated with the development of psychosis and schizophrenia.

Data from six long-term studies in five countries has shown that regular cannabis use predicts an increased risk for schizophrenia and symptoms of psychosis. Cannabis use during early adolescence coupled with a specific genetic vulnerability and changes in brain development are correlated with risk for the development of schizophrenia and overall cognitive decline. However, the direction of the effect has been called into question.

Some studies suggest that individuals with psychosis use cannabis to alleviate their psychotic symptoms or to improve their mood. Others, however, suggest that cannabis causes or exacerbates psychotic symptoms. A pooled analysis of 35 studies showed a dose-response effect, with a greater risk of psychosis in people who used cannabis most frequently. Moreover, individuals with schizophrenia who are moderate to heavy cannabis users show a greater brain volume reduction over a 5-year follow-up compared with non-users.

Despite the fact that fewer adolescents believe that regular cannabis use is harmful to their health and increasingly permissive state laws governing the use of medical marijuana, the medical literature presents clear evidence for a neurotoxic effect of cannabis on the adolescent brain.   These findings highlight the importance of efforts targeting adolescent cannabis use, including policy measures and psychoeducation in the doctor’s office.

Will stopping cannabis use diminish or halt the experience of psychosis?

Due to the complex nature of psychosis and schizophrenia, it is difficult to determine whether it was the “chicken or the egg” or whether marijuana use superseded the psychosis or marijuana use exacerbated symptoms of psychosis. However, once an episode of psychosis is triggered, it is very difficult to “switch off” even when the person stops using marijuana. At this point, it is imperative the person seek treatment which typically involves pharmacotherapy in combination with specialized psychotherapy.

Intervene early. This may significantly impact the prognosis and course of treatment for your teen. If you notice your teen is beginning to show signs of psychosis, take them to see their pediatrician or primary care physician who may then refer to a psychiatrist for an evaluation.

About the Author: Hayley Citro, LPC, LCDC is currently an addictions counselor at The Menninger Clinic. She has special training in motivational interviewing in addition to being a yoga teacher.

Behavioral Addiction: What We Know and What We Don’t