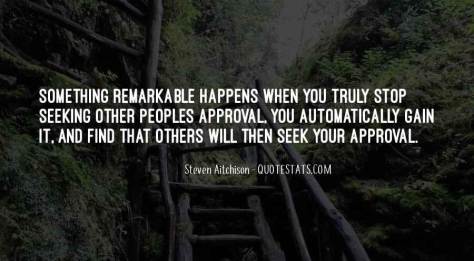 The older I get, the more reflective and observant I become. It might be because I’m older and a bit wiser, but I think it’s more about me learning important life lessons, appreciating and valuing what I have, not looking around comparing myself to others, or seeking other people’s approval or validation, and most of all being the best version of me.

Individuals who are self-assured and have secure high self-esteem aren’t bothered when others criticize their appearance, attack or make fun of their work, or try to humiliate them. Why?

If you are a Secure High Self-Esteem person, you:

I see so many people who constantly struggle because they either see themselves as victims of life, that life is a dogfight with only a winner and a loser, or they try desperately to seek approval or validation from other people. I can relate because I once saw myself as a victim (woe-is-me mentality) and, before I finally found my voice and myself, I also sought approval and validation from others around me. I truly believe the best gift you can give yourself is self-validation.

“Something remarkable happens when you truly stop seeking other people’s approval, you automatically gain it, and find that others will then seek your approval.” -Steve Aitchison

Secure self-esteem comes from inside you. It is associated with high self-determination, knowing who you really are, and behaving independently (Vonk, 2006). What’s more, researchers have also found that even with “high” self-esteem, there’s an important distinction between someone with a stable high self-esteem vs. someone whose high self-esteem is unstable and contingent (Kernis, Lakey, & Heppner, 2008).

Secure high self-esteem involves “favorable feelings of self-worth that arise naturally from successfully dealing with life challenges, being authentic and expressing one’s true self in everyday life, and having relationships in which one is valued for whom one is and not for what one achieves” (Kernis, Lakey, & Heppner, 2008, p. 479).

People with secure high self-esteem are happy with themselves and like who they are, warts and all. Their sense of self-worth is stable and they’re able to accept their weaknesses. They “do not feel a need to be superior to others; for these individuals, high self-esteem is a given and does not need to be validated on an everyday basis” (Kernis, Lakey, & Heppner, 2008, p. 479).

Stephen Covey, in his classic The 7 Habits of Highly Effective People (2004), talked about the Abundance Mentality vs. the Scarcity Mentality.

Those with a Scarcity Mentality will hoard or even steal recognition and credit, and power or profit. They’re unhappy for or jealous about the success or happiness of others around them.

“It’s almost as if something is being taken from them when someone else receives special recognition or windfall gain or has remarkable success or achievement” (Covey, 2004, p. 219).

It’s very sad because, instead of seeing their lives as being filled with abundance, they see themselves as lacking.

Covey (2004) said this is because the sense of self-worth for those with a scarcity mindset “comes from being compared, and someone else’s success, to some degree, means their failure” (p. 219).

“People with a Scarcity Mentality harbor secret hopes that others might suffer misfortune — not terrible misfortune, but acceptable misfortune that would keep them ‘in their place.’ They’re always comparing, always competing. They give their energies to possessing things or other people in order to increase their sense of worth” (Covey, 2004, p. 219-220).

The author of The EQ Difference (2005) uses “The Famine Voice” in place of a Scarcity Mindset, and “The Abundance Voice” rather than a Abundance Mindset.

I especially like how The Abundance Voice is described (Lynn, 2005): “[T]he abundance voice proclaims that, indeed, life’s riches are plentiful. She believes that somehow there will always be enough, and she refuses to be ruled by thoughts of scarcity. She can convince you that a crumb of bread, when served with a smile, is indeed a feast” (p. 67).

Takeaway: Secure High Self-Esteem people (1) Know and stand firm in the belief that they don’t need or seek approval or validation from others; (2) Recognize that attack(s) directed at them usually have nothing to do with their project, product, service, or who they are as a human being; (3) Always accept and respect themselves. They understand and appreciate their strengths, while also acknowledging their weaknesses; and (4) Have an Abundance Mindset. They believe there is plenty of riches to go around and that life isn’t a competition, with a winner or loser. They are simply content running their own race.

Lynn, A. B. (2005). The EQ Difference: A Powerful Plan for Putting Emotional Intelligence to Work. AMACOM.

Age vs. Genetics: Which Is More Important for Determining How We Age?