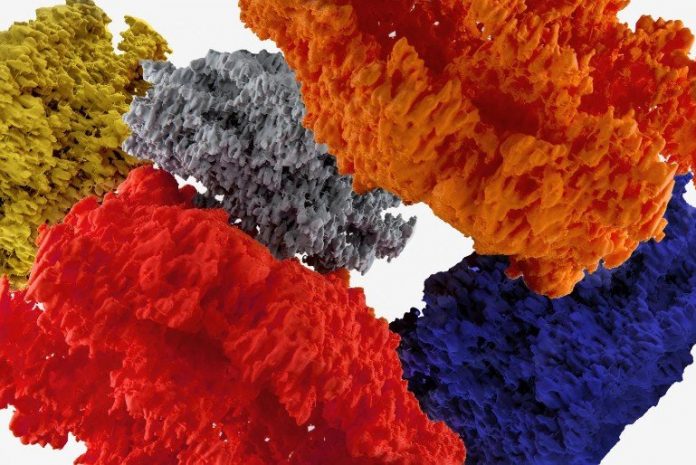 Summary: Astrocytes are involved in regulating inhibitory synapses by binding to neurons through the NrCAM adhesion molecule.

In the orchestra of the brain, the firing of each neuron is controlled by two notes–excitatory and inhibitory– that come from two distinct forms of a cellular structure called synapses. Synapses are essentially the connections between neurons, transmitting information from one cell to the other. The synaptic harmonies come together to create the most exquisite music–at least most of the time.

When the music becomes discordant and a person is diagnosed with a brain disease, scientists typically look to the synapses between neurons to determine what went wrong. But a new study from Duke University neuroscientists suggests that it would be more useful to look at the white-gloved conductor of the orchestra — the astrocyte.

Astrocytes are star-shaped cells that form the glue-like framework of the brain. They are one kind of cell called glia, which is Greek for “glue.” Previously found to be involved in controlling excitatory synapses, a team of Duke scientists also found that astrocytes are involved in regulating inhibitory synapses by binding to neurons through an adhesion molecule called NrCAM. The astrocytes reach out thin, fine tentacles to the inhibitory synapse, and when they touch, the adhesion is formed by NrCAM. Their findings were published in Nature on November 11.

“We really discovered that the astrocytes are the conductors that orchestrate the notes that make up the music of the brain,” said Scott Soderling, PhD, chair of the Department of Cell Biology in the School of Medicine and senior author on the paper.

However, this study shows that astrocytes are running the show in overall brain function, and could be important targets for brain therapies, said co-senior author Cagla Eroglu, PhD, associate professor of cell biology and neurobiology in the School of Medicine. Eroglu is a world expert in astrocytes and her lab discovered how astrocytes send their tentacles and connect to synapses in 2017.

“A lot of the time, studies that investigate molecular aspects of brain development and disease study gene function or molecular function in neurons, or they only consider neurons to be the primary cells that are affected,” said Eroglu. “However, here we were able to show that by simply changing the interaction between astrocytes and neurons — specifically by manipulating the astrocytes — we were able to dramatically alter the wiring of the neurons as well.”

Soderling and Eroglu collaborate often scientifically, and they hashed out the plan for the project over coffee and pastries. The plan was to apply a proteomic method developed in Soderling’s lab that was further developed by his postdoctoral associate Tetsuya Takano, who is the paper’s lead author.

Takano designed a new method that allowed scientists to use a virus to insert an enzyme into the brain of a mouse that labeled the proteins connecting astrocytes and neurons. Once tagged with this label, the scientists could pluck the tagged proteins from the brain tissue and use Duke’s mass spectrometry facility to identify the adhesion molecule NrCAM.

Then, Takano teamed up with Katie Baldwin, a postdoctoral associate in Eroglu’s lab, to run assays to determine how the adhesion molecule NrCAM plays a role in the connection between astrocyte and inhibitory synapses. Together the labs discovered NrCAM was a missing link that controlled how astrocytes influence inhibitory synapses, demonstrating they influence all of the ‘notes’ of the brain.

“We were very lucky that we had really cooperative team members,” said Eroglu. “They worked very hard and they were open to crazy ideas. I would call this a crazy idea.”

Funding: The project was funded by the NIH BRAIN Initiative, National Institute on Drug Abuse, Kahn Neurotechnology Award, Uehara Memorial Foundation, and Japan Society for the Promotion of Science.

Chemico-genetic discovery of astrocytic control of inhibition in vivo

Perisynaptic astrocytic processes are an integral part of central nervous system synapses1,2; however, the molecular mechanisms that govern astrocyte–synapse adhesions and how astrocyte contacts control synapse formation and function are largely unknown. Here we use an in vivo chemico-genetic approach that applies a cell-surface fragment complementation strategy, Split-TurboID, and identify a proteome that is enriched at astrocyte–neuron junctions in vivo, which includes neuronal cell adhesion molecule (NRCAM). We find that NRCAM is expressed in cortical astrocytes, localizes to perisynaptic contacts and is required to restrict neuropil infiltration by astrocytic processes. Furthermore, we show that astrocytic NRCAM interacts transcellularly with neuronal NRCAM coupled to gephyrin at inhibitory postsynapses. Depletion of astrocytic NRCAM reduces numbers of inhibitory synapses without altering glutamatergic synaptic density. Moreover, loss of astrocytic NRCAM markedly decreases inhibitory synaptic function, with minor effects on excitation. Thus, our results present a proteomic framework for how astrocytes interface with neurons and reveal how astrocytes control GABAergic synapse formation and function.

Detecting Dementia in the Blood

The Money Behind Academic Publishing

A Guide to Digital Marketing for Private Practice Neurology