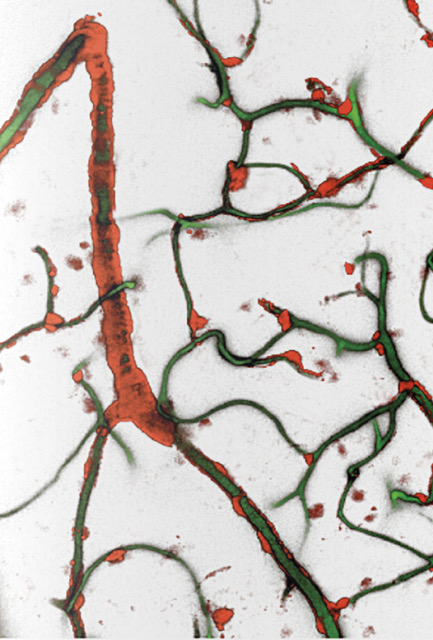 Dementia affects increasing numbers of people as they age (one in 14 people over the age of 65 suffer from dementia). It changes how the brain functions, gradually stopping brain cells and brain connections from working so that people progressively struggle with remembering things, thinking and speaking. Alzheimer’s disease is the most common form of dementia and is characterised by the build-up in the brain of two proteins, beta-amyloid and tau, which are thought to damage cells and cause them to die. Up to now, most drugs have targeted these proteins, but have not been successful and there is still no cure for Alzheimer’s disease.

However, changes happen in the brain years before people start reporting problems with memory and thinking. It is therefore likely that the most effective treatments will act early in the disease process to interfere with its progression before brain cells become damaged making it important to understand what happens to cause the onset of Alzheimer’s disease. Increasing evidence suggests that damage to blood vessels feeding the brain might first trigger the disease. Firstly, risk factors for dementia are the same as risk factors for cardiovascular disease (e.g. obesity, lack of exercise, high blood pressure, and the main genetic risk factor for Alzheimer’s disease, APOE4), suggesting that unhealthy blood vessels could cause both diseases. Secondly, brain blood vessels show the first signs of dysfunction in Alzheimer’s disease, as brain blood flow is disrupted before the build-up of beta-amyloid and tau, and before neurons are damaged and memory is impaired.

In a project funded by the Medical Research Council, my lab is trying to understand how changes in blood vessels in the brain are linked to the onset of Alzheimer’s disease. Brain cells need a constant supply of energy in the form of oxygen and glucose provided in the blood, and previous research has shown that if they have only low levels of oxygen, brain cells accumulate more beta-amyloid. We are creating new genetically modified mice that allow us to investigate whether the critical trigger for Alzheimer’s disease is if blood vessels in the brain stop working properly, producing a decrease in brain oxygen levels which causes the build-up of beta-amyloid.

These experiments will reveal how changes in blood flow lead to the build-up of beta-amyloid and damage to brain cells. The new mice will allow us to test the effect of drugs and lifestyle interventions such as exercise on this process, identifying new approaches for treatments targeting the very early stages of Alzheimer’s disease.

Dr Catherine Hall is a senior lecturer at the School of Psychology and the director of the Brain Energy Lab.

Burning and Tingling in Your Feet? You May Have Small Fiber Neuropathy

New Link Between Personality and Risk of Death