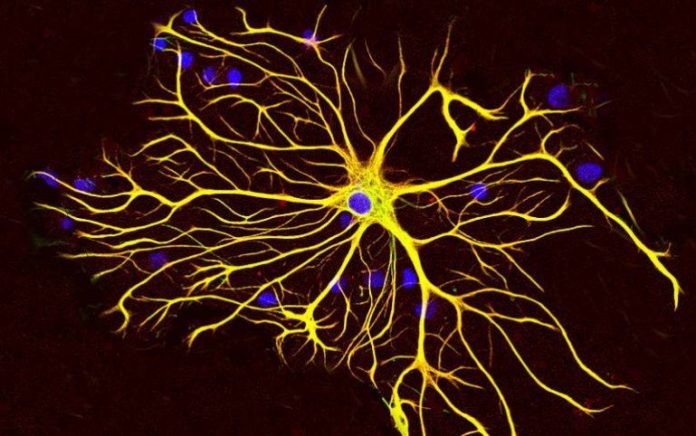 Summary: Astrocytes play a vital role in maintaining the pH balance within the brain.

Brain cells called astrocytes play a vital role in preventing acidification of the brain, according to a new study in mice led by UCL researchers.

The researchers hope their findings, published in Nature Communications, could help further understanding of several common brain diseases that involve disturbances of pH balance, such as stroke and epilepsy, and may support research into the development of new treatment options.

Lead author Dr Shefeeq Theparambil (UCL Neuroscience, Physiology & Pharmacology) said: “The human brain consumes an immense amount of energy, the rate of which is estimated to be equal to human leg muscles running a marathon. Such a high metabolic rate produces a significant amount of acid, but until now, it had not been entirely clear how the brain protects itself from harmful acidification.

“We now found that brain glial cells astrocytes play an important housekeeping role in maintaining a healthy pH balance in the brain. We believe it is important, considering that the brain pH can serve as a potential biochemical marker for IQ and there is a strong association of brain acidification with the development of several psychiatric and aging-related brain diseases.”

Astrocytes, shaped like stars, are a type of glial cell, which are non-neuronal cells that make up part of our central nervous system. The researchers suspected that astrocytes may be important to pH regulation, as they can control the movements of alkaline bicarbonate, as well as monitor local brain activity by sensing neuronal signalling molecules.

By studying live mice and brain cell samples, the researchers were able to identify the mechanism by which astrocytes maintain pH balance in active areas of the brain. They found that at least one third of astrocytes in the mouse brain release bicarbonate that counteracts the acidity of the protons released by neuronal cells. The bicarbonate release corresponds to local activity levels in the brain, as the mechanism continually responds to changes in brain activity in order to maintain balance and support the activity of nerve cells processing information.

The research team also bred a genetically engineered mouse that lacked this astrocyte mechanism, and found that the animals’ brains were no longer capable of maintaining pH balance and the acidity impeded normal brain function.

The study was a collaboration between researchers at UCL Neuroscience, Physiology & Pharmacology, UCL Queen Square Institute of Neurology, and Centro de Estudios Científicos in Chile.

Another recent study led by Professor Alexander Gourine (UCL Neuroscience, Physiology & Pharmacology), who was the senior author on the new paper, identified another vital role of astrocytes, as they enable the brain to monitor and regulate its own blood flow by activating nerve cells controlling the heart and blood vessels to maintain an appropriate level of systemic arterial blood pressure.

Professor Gourine said: “Acid is produced in the brain in the form of CO2 and the human brain generates an astonishing amount of CO2 – more than 75 litres per day. This CO2 can only be removed from the brain by cerebral circulation. Uncontrolled fluctuations in brain CO2 and pH are detrimental to neuronal function and recent evidence suggests that ageing and the development of neurodegenerative diseases, like Alzheimer’s, are associated with a progressive reduction in brain pH.

“Our studies identify astrocytes as the key players in the control of local brain pH and global cerebral blood flow. The identified mechanism may prove to be an effective target in the development of novel treatments of brain disease.”

The study’s co-lead author Dr Patrick Hosford (UCL Neuroscience, Physiology & Pharmacology) added: “We spanned both hemispheres to bring all the necessary expertise together in order to answer this fundamental, but under-explored question. I’m extremely pleased to contribute to this study that could potentially increase our understanding of brain disease.”

Brain cells continuously produce and release protons into the extracellular space, with the rate of acid production corresponding to the levels of neuronal activity and metabolism. Efficient buffering and removal of excess H+ is essential for brain function, not least because all the electrogenic and biochemical machinery of synaptic transmission is highly sensitive to changes in pH. Here, we describe an astroglial mechanism that contributes to the protection of the brain milieu from acidification. In vivo and in vitro experiments conducted in rodent models show that at least one third of all astrocytes release bicarbonate to buffer extracellular H+ loads associated with increases in neuronal activity. The underlying signalling mechanism involves activity-dependent release of ATP triggering bicarbonate secretion by astrocytes via activation of metabotropic P2Y1 receptors, recruitment of phospholipase C, release of Ca2+ from the internal stores, and facilitated outward HCO3−transport by the electrogenic sodium bicarbonate cotransporter 1, NBCe1. These results show that astrocytes maintain local brain extracellular pH homeostasis via a neuronal activity-dependent release of bicarbonate. The data provide evidence of another important metabolic housekeeping function of these glial cells.

Journal Scan – This Month in Other Journals, July 2021