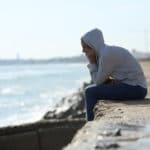 Depression or anxiety in young adult males, ages 18 or 19, is linked to a 20 percent greater risk of having a heart attack in middle age, according to a new Swedish study from the European Society of Cardiology (ESC) Congress 2020.

The link can be partly explained by poorer stress resilience and lower physical fitness among teens with mental disorders.

“Be vigilant and look for signs of stress, depression or anxiety that is beyond the normal teenage angst: seek help if there seems to be a persistent problem — telephone helplines may be particularly helpful during the COVID-19 pandemic,” said study author Dr. Cecilia Bergh of Örebro University in Sweden.

“If a healthy lifestyle is encouraged as early as possible in childhood and adolescence it is more likely to persist into adulthood and improve long-term health.”

There are signs that mental health has been declining in young people. This study looked at whether conditions like depression in young adults (age 18 or 19) are linked to a higher risk of cardiovascular disease in adulthood. The research team also investigated the possible role of stress resilience (ability to cope with stress in everyday life) in helping to explain any links.

The research involved 238,013 men born between 1952 and 1956 who were given extensive examinations in late adolescence (as part of their assessment for compulsory military service) and were then followed into middle age (up to the age of 58 years).

The exams at the age of 18 or 19 years included medical, psychiatric, and physical examinations by physicians and psychologists. Stress resilience was measured by an interview with a psychologist and a questionnaire, and based on familial, medical, social, behavioral and personality traits.

A total of 34,503 men were diagnosed with a non-psychotic mental disorder (such as depression or anxiety) at enlistment. Follow-up for cardiovascular disease was through hospital medical records.

The link between mental illness and heart attack was partly — but not completely — explained by poorer stress resilience and lower physical fitness in teenagers with a mental illness.

“We already knew that men who were physically fit in adolescence seem less likely to maintain fitness in later years if they have low stress resilience,” said Bergh. “Our previous research has also shown that low stress resilience is also coupled with a greater tendency towards addictive behaviour, signalled by higher risks of smoking, alcohol consumption and other drug use.”

“Better fitness in adolescence is likely to help protect against later heart disease, particularly if people stay fit as they age. Physical activity may also alleviate some of the negative consequences of stress. This is relevant to all adolescents, but those with poorer wellbeing could benefit from additional support to encourage exercise and to develop strategies to deal with stress,” said Bergh.

Age is just a number: Cross-generational conversations are more positive than you expect

From The Invisible To The Visible – My Brain Lesion and Me

Flavonoids May Reduce Mortality Risk for People With Parkinson’s Disease