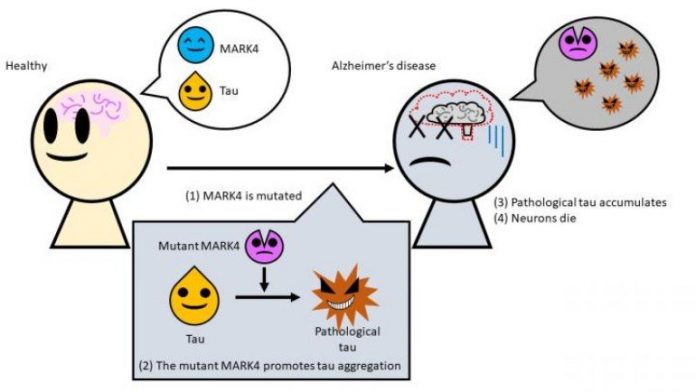 Summary: Mutations to the MARK4 gene causes the properties of tau to change, making them more likely to aggregate and become more insoluble.

Researchers from Tokyo Metropolitan University have discovered a new mechanism by which clumps of tau protein are created in the brain, killing brain cells and causing Alzheimer’s disease. A specific mutation to an enzyme called MARK4 changed the properties of tau, usually an important part of the skeletal structure of cells, making it more likely to aggregate, and more insoluble. Getting to grips with mechanisms like this may lead to breakthrough treatments.

Alzheimer’s disease is a life-changing, debilitating condition, affecting tens of millions of people worldwide. According to the World Health Organization, it is the most common cause of senile dementia, with numbers worldwide expected to double every 20 years if left unchecked.

Alzheimer’s is said to be caused by the build-up of tangled clumps of a protein called “tau” in brain cells. These sticky aggregates cause neurons to die, leading to impairment in memory and motor functions. It is not yet clear how and why tau builds up in the brain cells of Alzheimer’s patients. Understanding the cause and mechanism behind this unwanted clumping would open up the way to new treatments and ways to prevent the disease.

A team led by Associate Professor Kanae Ando of Tokyo Metropolitan University has been exploring the role played by the MARK4 (Microtubule Affinity Regulating Kinase 4) enzyme in Alzheimer’s disease. When everything is working normally, the tau protein is an important part of the structure of cells, or the cytoskeleton. To keep the arms of the cytoskeleton or microtubules constantly building and disassembling, MARK4 actually helps tau detach from the arms of this structure.

Problems start when a mutation occurs in the gene that provides the blueprint for making MARK4. Previous work had already associated this with an increased risk of Alzheimer’s, but it was not known why this was the case. The team artificially introduced mutations into transgenic drosophila fruit flies that also produce human tau, and studied how the proteins changed in vivo.

They discovered that this mutant form of MARK4 makes changes to the tau protein, creating a pathological form of tau. Not only did this “bad” tau have an excess of certain chemical groups that caused it to misfold, they found that it aggregated much more easily and were no longer soluble in detergents. This made it easier for tau to form the tangled clumps that causes neurons to degenerate.

MARK4 has also been found to cause a wide range of other diseases which involve the aggregation and buildup of other proteins. That’s why the team’s insights into tau protein buildup may lead to new treatments and preventative measures for an even wider variety of neurodegenerative conditions.

Funding: This work was supported by a Grant-in-Aid for Scientific Research on Innovative Areas (Brain Protein Aging and Dementia Control) [JSPS KAKENHI Grant number 17H05703], a research award from the Hoan-sha Foundation, the Takeda Science Foundation, a research award from the Japan Foundation for Aging and Health, a Grant-in-Aid for Scientific Research on Challenging Research (Exploratory) [JSPS KAKENHI Grant number 19K21593], and Research Funding for Longevity Science 19-7 from the National Center for Geriatrics and Gerontology, Japan.

About this genetics and Alzheimer’s disease research news

Sleepless and Selfish: Lack of Sleep Makes Us Less Generous

Fluency in Dragon | The Psychology of Video Games