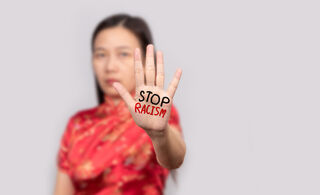 With the deaths of George Floyd, Breonna Taylor, Ahmaud Arbery, and many other Black Americans, the Black Lives Matter movement has sparked increased discourse in the US and other parts of the world about racism and how it is still pervasive today. Much of the history of racism is told from a “Black vs. White” perspective, but what about how other people of color contribute to racism against the Black community? People in the Asian American Pacific Islander (AAPI) community have both contributed to and benefitted from anti-Black racism. This blog post aims to address this difficult but necessary topic and how we can become better allies to other Black, Indigenous, and People of Color (BIPOC).

A Culture of “White Is Best”

In many Asian cultures, Eurocentric physical features are considered more attractive than the physical features Asian individuals may have. Many researchers have long noticed that colorism in the AAPI community influences social standing. While colorism also exists due to the result of an ideology of White supremacy imposed by European colonialists, it persists among the AAPI community.

The belief that a lighter complexion equates leisure class whereas a darker complexion is associated with blue-collar work leads to AAPIs idealizing and holding “whiteness” to a higher standard. This is compounded by the somewhat unrelated bias that first-generation Asian Americans may have, associating dark skin with labor in the field back in Asia.

Additionally, there have been many instances where Asian individuals have gotten surgical procedures done to mimic Eurocentric features, such as double-eyelid surgery to produce larger eyes or nose jobs to produce a higher nose bridge. For example, Julie Chen, an Asian American journalist, reportedly underwent surgery to make her eyes bigger due to her boss claiming her Asian eyes made her appear “disinterested and boring.” It was also reported an agent did not want to represent her because of how she looked. Her career later took off after undergoing surgery.

How Do AAPIs Oppress BIPOC?

Asian cultures are more collectivist than Western cultures, placing a strong emphasis on honoring one’s family and focusing less on self-actualization. Emotional control, harmonious relationships, and group orientation are core values of many Asian cultures. Unfortunately, these values have fostered the stereotype of Asian passivity that is then associated with a lack of values or weakness.

Although this stereotype is negative and inaccurate, these core values may help explain why many in the AAPI community have historically remained on the sidelines when national issues around race and equality arise. To take a stand against racism would also mean a reevaluation of deeply reinforced beliefs surrounding anti-Blackness in the United States, a country that provided numerous opportunities for advancement for the AAPI community.

The AAPI community has historically been deemed as the “model minority,” which distances us from BIPOC. This creates a sense of “us versus them,” with us being “different” or “better.” Buying into this belief may prompt people in the AAPI community to step out of the struggle rather than siding with our other brothers and sisters of color.

How Can AAPIs Respond to the Call for Activism?

However, being considered as a very represented minority, AAPIs can benefit from engaging in efforts to contribute to social change without being criticized or judged. The following are some ways to become involved:

Rose Yang, Psy.D is a clinical psychologist at The Menninger Clinic. Her interests include transgender issues, cultural competency, and personality disorders.

Need to Vent? Turn to Real-Life Support, Not Social Media