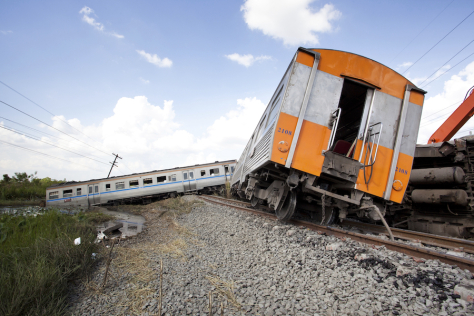 Leaders exhibit common bad habits and researchers have pinpointed specific behaviors that can derail a person’s career (Lombardo & Eichinger, 2009). For two great coaching and development guides, consult FYI: For Your Improvement: A Development and Coaching Guide (Lombardo & Eichinger, 2009) and Compass: Your Guide for Leadership Development and Coaching (Scisco, Biech, & Hallenbeck, 2017).

Lombardo and Eichinger (2009) define derailing behaviors as negative characteristics or flame-out factors that derail an individual’s career. According to the Center for Creative Leadership (Scisco, Biech, & Hallenbeck, 2017), “A derailed leader is one who, after having reached a level of success in the organization, is fired, demoted, or involuntarily reaches a career plateau. Before these managers derailed, their organizations saw them as having high potential for advancement, having an impressive track record of results, and holding an established leadership position. But then something happened.”

Statistics about failure or inadequate success experienced by executives in new leadership positions (in the first 18 months) range from 38% to over 50% (Riddle, 2016).

Here are three common leadership derailing behaviors I see in leaders in organizations:

Marshall Goldsmith, a world-renowned executive coach, shared a story where he witnessed this very bad habit of “adding too much value” in action during dinner:

“The two men at dinner were clearly on the same wavelength. One of them was Jon Katzenbach, the ex-McKinsey director who now heads his own elite consulting boutique. The other fellow was Niko Canner, his brilliant protégé and partner. They were plotting out a new venture. But something about their conversation was slightly off. Every time Niko floated an idea, Katzenbach interrupted him. “That’s a great idea,” he would say, “but it would work better if you . . .” and then he would trail off into a story about how it worked for him several years earlier in another context. When Jon finished, Niko would pick up where he left off only to be interrupted within seconds by Jon again. This went on back and forth like a long rally at Wimbledon” (Goldsmith, 2007, p. 48).

“Imagine you’re the CEO. I come to you with an idea that you think is very good. Rather than just pat me on the back and say, “Great idea!” your inclination (because you have to add value) is to say, “Good idea, but it’d be better if you tried it this way.” The problem is, you may have improved the content of my idea by 5 percent, but you’ve reduced my commitment to executing it by 50 percent, because you’ve taken away my ownership of the idea. My idea is now your idea—and I walk out of your office less enthused about it than when I walked in. That’s the fallacy of added value. Whatever we gain in the form of a better idea is lost many times over in our employees’ diminished commitment to the concept” (Goldsmith, 2007, p. 48-49).

Lombardo and Eichinger (2009) wrote that people who are unskilled at listening tend to cut others off, try to finish other people’s sentences, and interrupt to make a pronouncement or render a solution or decision. As a result, those poor at listening do not learn much from their interactions with others.

Goldsmith worked with a group of executives of one of the world’s most respected research and development organizations that had a problem retaining young talent. They had a very visible and annoying way to show that they weren’t listening.

“During presentations everyone in senior management had developed the annoying habit of looking at their watches, motioning for junior scientists to move it along, and repeating over and over, “Next slide. Next slide.” . . . Have you ever tried to make a presentation while a manager grunted at you and kept telling you to move it along? Well, that’s how the junior scientists at this company felt” (Goldsmith, 2007, p. 87).

The best and most concise description of taking ownership is from the book, Extreme Ownership: How U.S. Navy SEALs Lead and Win (Willink & Babin, 2017):

“On any team, in any organization, all responsibility for success and failure rests with the leader. The leader must own everything in his or her world. There is no one else to blame. The leader must acknowledge mistakes and admit failures, take ownership of them, and develop a plan to win. The best leaders don’t just take responsibility for their job. They take Extreme Ownership of everything that impacts their mission” (Willink & Babin, 2017, p. 30).

“The irony, of course, is that all the fears that lead us to resist apologizing—the fear of losing, admitting we’re wrong, ceding control—are actually erased by an apology. When you say, “I’m sorry,” you turn people into your allies, even your partners” (Goldsmith, 2017, p. 84).

“A leader who cannot shoulder the blame is not someone we will follow blindly into battle. We instinctively question that individual’s character, dependability, and loyalty to us. And so we hold back on our loyalty to him or her” (Goldsmith, 2017, p. 94).

I love this quote:

Right of People on Disability to Refuse Psychotropic Medications

The classical disorders of the 12 cranial nerves and their checklists – The Neurology...

Clues Into a Sleep Mystery