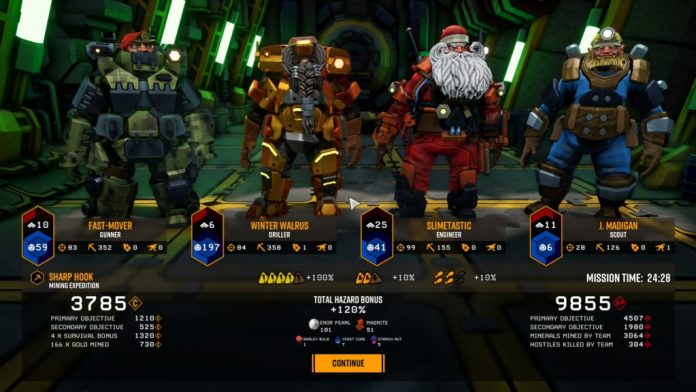 I’ve been doing two things in my free time lately. One is playing Deep Rock Galactic, a co-op mining game about dwarves in space. The other is reading a book by BJ Fogg about habits and behavior change called Tiny Habits. Both are good.

Fogg has a whole model of behavior change and habit formation that he spends the whole book discussing. One part of that process is celebrating successes with some kind of reward in order to build good habits. One of the points that he pauses to emphasize really struck me: the difference between rewards and incentives.

Rewards, he argues, is a term that has become stretched into all kinds of non-useful shapes by popular usage outside of the psychology and behavior science context where its use in behavior change originated. It’s often used to describe anything good that comes after a desired behavior regardless of timing and how tightly it’s tied to that behavior. But we know from decades of research on reward schedules and learning that the timing of a reward is critical. A behavior will be learned or repeated more if the reward happens immediately and if it’s directly linked to the behavior.

Otherwise, you don’t have a reward. You probably have an incentive.

So when my daughter gets a “Lesson complete!” fanfare after completing an online homework assignment, that’s a reward in the classical sense. If I buy her a RoadBlox gift card for going all semester without missing an assignment, that’s an incentive.

Or let’s take Deep Rock Galactic as an example. I think of leveling up my character is an incentive because it happens after a long chain of behaviors in which I play several missions. It’s a payoff for grinding over time. Same for unlocking weapons and cosmetics. But finding a vein of gold and hitting it with my pick axe? That provides the reward of minerals going into my inventory, not to mention the fun “tink! tink!” sound. Depositing the minerals into my team’s robot mule gives me another reward in the form of seeing progress toward the mission objective increasing and maybe some perceived appreciation from my teammates.

What does this distinction matter to game designers? …Good question! My thinking goes that rewards are good for building habits –things we do with little to no decision or deliberation involved– and for teaching smaller gameplay loops. Rewarding people for depositing minerals into the mule or for digging up precious treasures based on certain visual cues is an important part of Deep Rock Galactic at a very basic level.

Incentives, on the other hand, are more suited for what we typically think of as “goals.” Objectives that require closing the gap between “here” and “there” by increments and over time. Incentivizing people to play Deep Rock Galactic by letting them eventually level up equipment and unlock new types of missions is also important.

Maybe the difference is that rewards should be tightly and immediately tied to desired behaviors, while incentives can be tied more tightly to feedback, progress, and developing new skills? Honestly, I’m still thinking about this myself. What do you think? Especially if you’re a game developer, I’m interested in what you think the best uses of rewards and incentives are. Shoot me a note or make a comment on this blog post.

Exploring Aspirin for the Treatment and Prevention of Migraines