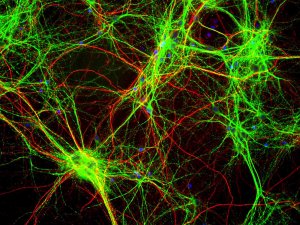 I am yet to request serum neurofilament light protein (NfL) in my practice. I am not sure yet why I should, but until now I confess I really haven’t looked for a reason to do so. I however know that some MSologists now tick it, along with other blood tests, when they investigate people they suspect may have multiple sclerosis (MS). NfL are proteins that are released by damaged neurones. Should I be requesting NfL in my clinical practice? I sniffed around to find the case for testing serum NfL, and below is what I found.

Many studies have looked at the value of NfL in MS. One such very well-planned study that addresses many of my questions is that by Guili Disanto and colleagues, published in the journal Annals of Neurology in 2017. In the paper, titled Serum Neurofilament light: a biomarker of neuronal damage in multiple sclerosis, the authors studied >380 people with MS and >150 healthy controls, and report four important findings.

The authors concluded, with enough justification I think, that serum NfL is a “sensitive and clinically meaningful blood biomarker to monitor tissue damage and the effects of therapies in MS“.

The strong correlation between cerebrospinal fluid (CSF) and serum NfL was also confirmed by a study published in the journal Neurology, by Lenka Novakova and colleagues titled Monitoring disease activity in multiple sclerosis using serum neurofilament light protein. As the title indicates, they discovered that serum NfL is as good as CSF NfL in monitoring the progression of MS.

The observation that NfL predicts the course of MS is supported by many other studies, such as the one by Kristin Varhaug and colleagues in the journal Neurology Neuroimmunology and  Neuroinflammation whose title is also self-explanatory: Neurofilament light chain predicts disease activity in relapsing-remitting MS. A more recent paper, also published in Neurology, further reinforces the benefit of serum NfL in disease course prediction. It is titled Blood neurofilament light chain as a biomarker of MS disease activity and treatment response. In this paper, Jehns Kuhle and colleagues practically confirm all the above stated benefits of NfL, concluding that “our results support the utility of blood NfL as an easily accessible biomarker of disease evolution and treatment response”.

As for long term outcome, the 10 year follow up study by Alok Bahn and colleagues, published in the Multiple Sclerosis Journal in 2018, is most informative. In their paper titled Neurofilaments and 10-year follow-up in multiple sclerosis, the authors noted that “CSF levels of NfL at the time of diagnosis seems to be an early predictive biomarker of long-term clinical outcome and conversion from RRMS to SPMS”. Further support for the long term prognostic value of serum NfL comes from a paper published in 2018 in the journal Brain titled Serum neurofilament as a predictor of disease worsening and brain and spinal cord atrophy in multiple sclerosis. The authors, Christian Barro and colleagues, studied more than 250 people with MS and concluded that “the higher the serum neurofilament light chain percentile level, the more pronounced was future brain and cervical spinal volume loss“.

It is pertinent to note that the MS sphere is not the only one in which NfL is making waves. It has been found to be elevated in many other disorders such as motor neurone disease (MND), multiple system atrophy (MSA), hereditary spastic paraplegia (HSP), stroke, active small vessel disease, and peripheral neuropathy (PN). With these disclaimers in place, it may just be time to start ticking that NfL box.

Highly Accurate Tool for the Detection of Autism as Early as 12 Months of...