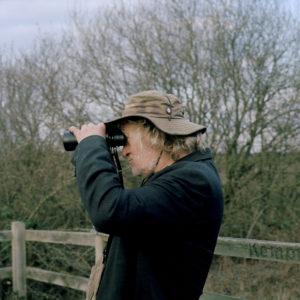 A days Bird watching at a west London Reservoir. Bird watching is the one constant, the consistent, grounding thread that runs throughout Justin’s chaotic life; it’s this passion that brings light to the shade. When Justin does remark on having a good day, there is normally a list of birds to follow.

After a  year in hiatus, The Art of Psychiatry and the RCPsych Art SIG are joining forces to welcome their first guest artist to give a talk at the Royal College:

How to get tickets: Royal College of Psychiatrists members can get tickets via this link

People who are not members of the College are very welcome to attend.  Tickets are available via calling Catherine Langley at the College on 0203 701 2592.

Louis Quail is a documentary photographer and will be discussing his recently published work ‘Big Brother’:

About Louis Quail and Big Brother:

“Big Brother is an intimate photographic portrait of Louis Quail’s older brother, Justin, and his daily struggle with schizophrenia. The condition is severe and Justin has been sectioned three times in his life. Yet, as the book shows, there is much more to him than his illness. He has interests, hobbies (painting and poetry and especially birdwatching). He also has love; he has been with his girlfriend, Jackie, for over 20 years.

By showing the person beyond the illness, Big Brother challenges stigma head on. It reveals a system in crisis; under resourced and creaking under the weight of its own bureaucracy, but it also discovers important truths on the nature of resilience. At its heart, though, Big Brother is a love story.

The book includes extensive texts to tell Justin’s story. The complexity of his life is reflected in the complex structure of the book which incorporates a number of inserts that provide a deep insight into Justin’s world through extracts from medical reports, police records and from his own notebooks. The book also includes many of Justin’s drawings and paintings as well as a separate booklet featuring both these and his poetry.

Louis Quail has worked extensively for some of the UK’s best known magazines and has been published in the UK and internationally over many years. He increasingly devotes his time to personal, long term projects. His work for Big Brother has already been awarded various prizes and received significant critical acclaim. His 2015 Arts Council funded show, ‘Before They Were Fallen’, which explored the aftermath of the Afghan War from the perspective of British military families, toured the UK and received extensive press coverage. Louis has twice been a finalist in the National Portrait Gallery portraiture award and his work is held in their permanent collection.”