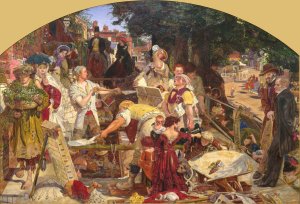 A critical part of history taking in medicine is establishing the occupation of the patient. This is because occupational activities and work place exposures are often major contributors to the disease. Furthermore, at the end of the medical process, the eventual diagnosis may have an impact on the patient’s ability to return to work. To be relevant, the occupational history must be exhaustive – it must establish current and past occupations, the tasks carried out, the risk of toxic exposure, and the use of personal protective equipment (PPE). The occupational history is so important to neurology that a whole subspecialty, occupational neuroscience, has emerged to evaluate “the effects of complex environmental and occupational exposure on working people”.

So what are the occupational hazards that may lead a patient to the neurologist? Below are my 7 most hazardous occupations to the nervous system.

Previously an occupational hazard restricted to professional typists, carpal tunnel syndrome (CTS) now threatens anyone who uses a computer. CTS develops when the median nerve is entrapped at the wrist, and it manifests as weakness and sensory disturbances over the thumb, the index finger, the middle finger, and half of the ring finger. Whilst desk work is the main risk of CTS, manual workers are not spared the peril because the occupations that increase the risk of CTS include assembly work, food processing and packing, and the use of hand-help powered vibratory tools. And, by the way, vibrating tools also predispose to cubital tunnel syndrome, entrapment of the ulnar nerve at the elbow which presents as weakness and sensory impairment of the little finger, and half of the ring finger (you now know why it was chosen for the wedding ring). Cubital tunnel syndrome, again by the way, also happens to be an occupational hazard of truck drivers, baseball pitchers, and golfers. Just saying.

Farming is actually a relatively innocent bystander with this occupational risk, the neurological hazard arising from exposure to pesticides. And the neurological consequence of pesticide use is Parkinson’s disease (PD), a threat that is established without any equivocation. All pesticides carry the same degree of PD risk, but the badge of ignominy surely belongs to organophosphates and carbamates. The risk of PD is however not all-or-none because it is proportional to the duration of exposure. And, as if PD wasn’t enough, pesticides also seem to increase the risk of developing Alzheimer’s disease (AD). I’m just the messenger!

An almost iconic neurological occupational risk-relationship is the association of welding and Parkinson’s disease (PD). Along with the related tasks of galvanizing and grinding, welding releases fumes of manganese (Mn), the metal that is suspected to be the PD-trigger in this case. As with pesticides, the risk appears to be proportional to the degree of exposure. But unlike pesticides, the reported PD risk of manganese is equivocal because some studies have not found any relationship between welding fumes and PD; indeed one found an inverse relationship between the two, reporting that welding reduces the risk of PD. Surely there are no fumes without fire, but in spite of this minor controversy, or because of it, neurologists are forever vigilant for manganese fumes when they make a diagnosis of PD; they are aware, after all, that only more data will clear the fumes. As an addendum, many other occupations, from teaching to computer programming, reportedly increase the risk of developing PD – presumably because of occupational stress!

Just as welding conferred notoriety on manganese, so has smelting endowed lead (Pb) with infamy. And the metal’s neurological ignominy is the peripheral neuropathy it evokes. The classical but rarer form of lead neuropathy, is a subacute motor neuropathy which is a manifestation of lead-induced porphyria. Far more common is a chronic sensory neuropathy which is considered to be the direct result of lead toxicity. Beyond neuropathy, chronic lead exposure has garnered disrepute for its reported links with motor neurone disease (MND), although this risk association is contested. In fairness to Pb, other periodic table elements such as thallium (Tl) and arsenic (As) also pose significant occupational risks of neuropathy. And whilst still on metals, it is worth pointing out the report that occupational exposure to iron (Fe) may be a risk factor for meningiomas. Dmitri Mendeleev must be turning in his grave!

Neurologists, particularly of the movement disorder fraternity, listen to the occupational history of their patients with very keen ears, which literally prick up when they hear that the patient is a musician. This is because a large swathe of musical instruments predispose musicians to career-threatening task-specific dystonia, a form of dystonia which targets muscles that are most frequently exerted, especially in performing delicate actions. Whilst this umbrella diagnosis embraces such non-musical disorders as writer’s cramp, runner’s dystonia, and croupier’s cramp, it is musician’s dystonia that constitutes the widest spectrum of task-specific dystonia. And the reason is not far-fetched: playing musical instruments professionally requires the repetitive performance of very exquisite motor skills over long periods of time. Initially, the dystonia is only evident whilst playing the musical instrument, but it eventually manifests during unrelated tasks, and even at rest. The diversity of symptoms of musician’s dystonia is rivalled only by the number of instruments in the music ensemble, ranging from finger incoordination to upper lip tremor. Singers are also at risk of dysphonia, a form of voice dystonia which they share with teachers, telemarketers and aerobic instructors – all potential victims of hoarseness and voice fatigue.

Unsurprisingly, competitive sports takes a heavy toll on the nervous system. At the fairly benign end of the spectrum is the compression of nerves, the innocent victims of grotesquely enlarged, almost mythically Herculean, muscles. Many nerves may be stretched or trapped by a long list of risky sports which includes archery, ballet, baseball, basketball, bowling, football, golf, hockey, tennis, weightlifting, gymnastics, and wrestling. And the classic sport-related nerve entrapment is that of the long thoracic nerve which manifests as scapular winging. Unfortunately, many sporting-related neurological hazards lie at the malign end of the spectrum, with such appalling diseases as chronic traumatic encephalopathy (CTE) from repetitive contact sports; Parkinson’s disease from the boxing related head injuries; and motor neurone disease (MND) especially from professional football. As with most such risks, the evidence for some sports-related neurological hazards is often anecdotal, but very difficult to dismiss in a neurology clinic.

This is, of course, a no brainer as every shift worker knows. Sleep disruption is the most prominent, but by far not the most serious hazard of burning the midnight candle at work. It is common knowledge that shift work reduces alertness, thereby compromising work performance. But more seriously, shift work increases the risk of several neurological disorders such as stroke, epilepsy, Parkinson’s disease (PD), Alzheimer’s disease (AD), and even multiple sclerosis (MS). As if these are not enough, shift work also predisposes to malignancies such as breast cancer and colon cancer, apart from impairing the function of many organs. Indeed the number of disorders now grouped under the remit of shift work sleep disorder (SWSD) is mind-numbing (apologies, I can’t conjure up a better pun). The reason shift work is such a medical nuisance is that it disrupts the brain’s critical circadian rhythm, thereby impairing the production of melatonin, a hormone that plays a hugely critical neuroprotective role. So think twice before taking that next lucrative night shift!

I suppose the key message of this blog post is…choose your profession wisely!

An Alternative Hypothesis of Alzheimer’s Based on Synaptic Alterations

What Types of Memories Are Forgotten in Alzheimer’s Disease?

Secrets of Traumatic Stress Hidden in the Brain Are Exposed

Maternal Use of Anti-Seizure Drugs, Risk of Autism and ADHD in Offspring