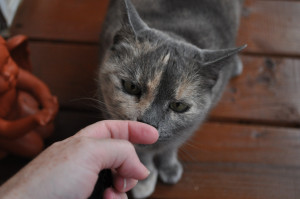 Like something from a futuristic medical thriller, you have mice diagnosing bladder tumours, and dogs detecting prostate cancer, just by sniffing the urine of patients. And like a plot from a Sci-Fi film, dogs are also trained to smell-out malaria. But we are not forward to the future – we are still in the here and now. And it is not just cats, dogs, and mice; pouched rats and nematodes have staked their claim as well. And the number of diseases that pets can presumably detect grows longer by the day (OK perhaps by the year), and these range from diabetic hypoglycaemia, colorectal cancer and migraine, to infections such as Clostridium difficile and tuberculosis. And whilst there are many animals in on the act, they are just bit players on this set – dogs are by far the superstars of the show.

As weird as it may sound, many of the reports being anecdotal, there are actually grains of truth and crumbs of evidence supporting the claim that pets are not just for Christmas. For example, there is a trail of research studies confirming the effectiveness of seizure detecting dogs; one paper specifically reports that they enabled 90% of subjects to reduce their seizure frequency by 34-50%. Although the time from seizure-detection to the actually seizure varies wildly, from 10 seconds to 5 hours before the epileptic attack, there seems to be enough time in most cases for the subject to take preventative measures.

But not all dogs are as skilled in the act as others, and your best bet is on alerting dogs which have a stronger bond with their owners. And if you want to pick a dog for its seizure-detecting skills, go for one that scores high in motivation…and low in neuroticism. This is important because the ability of dogs to detect seizures is not always benign; they are known to respond by attacking the subject or their helpers as part of an untrained fight or flight reaction. It is important therefore that seizure-alerting dogs are trained not to be stressed, and to respond appropriately.

But what are dogs actually detecting when they detect seizures? The conventional theory is that they are responding to subtle changes in behaviour; this may therefore explain why dogs can also warn of impending non-epileptic attacks, an observation that has been duplicated in another paper. The other possibility however is that the dogs are detecting disease-specific odours. This concept should not be surprising because, for example with infections, it has been shown that endotoxins induce a detectable aversive body odour. Similarly with liver disease, exhaled breath is already being considered in sorting out differential diagnoses. One premise behind the disease-odour hypothesis is the existence of disease-specific volatile organic compounds (VOCs). It feels all so exciting-no wonder there is now a well-developed scientific field of exhaled air analytics.

But as with all things in life, and particularly in science, here are always the naysayers, the gatecrashers to the party. And so it is that, with the case of seizures, there are those who are not convinced that pets possess the guile to pick up seizures. For example, in a small study of 3 subjects in an epilepsy monitoring unit, Rafael Ortiz and Joyce Liporace, reporting in the journal Epilepsy and Behaviour, found that seizure alert dogs were not effective in predicting seizures. In another paper  published in the journal Epilepsy Research, titled Can seizure-alert dogs predict seizures?, Stephen Brown and Laura Goldstein observed that there is “no rigorous data” to support the assertion that seizure alert dogs accurately predict seizures. Another detailed review in Plos One in 2018, by Amélie Catala and colleagues, concluded that appropriate empirical evidence that dogs can alert or respond to epileptic seizures is still missing.

But as the overused cliché goes, absence of evidence is not the evidence of absence. So how can we prove that dogs are indeed detecting seizure-specific odours? This is the task Amélie Catala and her colleagues also set out to accomplish when they made 5 dogs to sniff the odours obtained from 5 people with epilepsy. They tasked the dogs to tell apart the odours obtained around the time of the subjects’ seizures, from the odours obtained at other times when there were no proximate seizures. Reporting their findings in Science Report in 2019, under the title Dogs demonstrate the existence of an epileptic seizure odour in humans, they found that all the 5 dogs easily distinguished the seizure-related odours from the non-seizure related odours. But the small scale of the trial (were there just not enough dogs to go round?) justifies the authors’ call for larger trials to confirm their findings.

This is clearly still a grey area in epilepsy management, but one with a high potential if explored further. Are there any pet-loving neurologists willing to get in on the act? Do come along with your pets!

MASTERCLASSES IN NF » Department of Neurology » College of Medicine » University of...