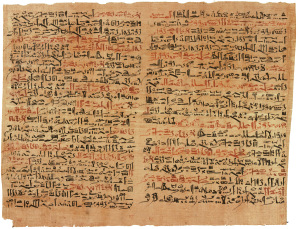 It is difficult to really say when neuroscience began, but most sources trace the first account of the nervous system to what is now known as the Edwin Smith papyrus; this is an Egyptian text written around 1700 B.C which documents surgical procedures for brain trauma. Since then, neuroscience breakthroughs have come at breakneck speed. The sources I have consulted for this blog post, referenced at the end, name innumerable discoveries made by countless innovators. To attempt to put a number to the most important breakthroughs will therefore be a well-nigh impossible task. So I came up with the idea of chunking key discoveries under distinct sections or systems of the nervous system.

But even this plan to chunk key breakthroughs came with strong challenges. For example, it is not always clear when a discovery was first made, or who crossed the finishing line first. This is because there are often several contenders in a tight race to the finish, and only a few discoveries were definite one-man paradigm-changing works. On the contrary, most discoveries were made by two or three pioneers working in a creative partnership, or by larger groups of people working in innovative collaborations. A further challenge was establishing what or where the finishing line was, as this is not always well-defined; this is understandable because most scientific advances were made over centuries, in small incremental steps, in a gradual progression from basic observation to complex synthesis.

To overcome these challenges, I have avoided too much emphasis on the ‘who first‘ conundrum that drives, and sometimes mires, science. I have also side-stepped the ‘when first‘ problem by noting only a few dates just to maintain some sense of chronology. I did a lot of picking and choosing for this post, and it is inevitable that somebody’s favourite discovery, or discoverer, would be missing; take heart and exult in the collective effort that has gone into these monumental breakthroughs in the history of neuroscience.

It is difficult to pinpoint who first described the cerebrospinal fluid (CSF) circulation but Nicolo Massa, Lewis Weed, Gustav Retzius, Francois Magendie and Albrecht von Haller have all been cited. The names associated with accurately describing the constituents of CSF are William Halliburton and William Mestrezat. Franciscus de la Boe Sylvius is credited with describing the aqueduct of Sylvius, and Alexander Monro for describing the foramen of Monro. Antonio Pacchioni discovered arachnoid granulations, whilst Guilio Cesare and Thomas Willis are credited for describing the anatomy and function of the choroid plexus. The accurate description of the blood brain barrier has been attributed to both Max Lewandowsky and Paul Erlich.

Cerebral localisation of functions has always been, and continues to be, a key neuroscience task. As brain functions become increasingly recognised as network-based, rather than region-based, cerebral localisation is taking more of a back seat in neuroscience. But it is still worthwhile to acknowledge the pioneers who identified key brain areas. Paul Broca is credited with the first description of the cortical speech area, whilst motor function localisation is traced to the works of Eduard Hitzig, Gustav Fritsch, David Ferrier, and Victor Horsley. The classification of cerebral areas into 52 parts was done by Korbinian Brodmann, whilst it was neurosurgeon Wilder Penfield who defined the cortical maps of the motor and sensory homunculus.

Both Rudolph Virchow and Heinrich Müller are credited with describing neuroglia. The credit for classifying these into microglia and oligodendroglia goes to Pio del Rio Hortega, whilst that for describing dendrites and axons goes to Otto Friedrich Karl Deiters. Camillo Golgi introduced the critical silver nitrate method of staining nerve cells, a technique advanced by Santiago Ramon y Cajal, who developed the gold chloride-mercury method for staining astrocytes. The description of the synapse is attributed to the truly great Charles Scott Sherrington. W. Bevan Lewis, Vladimir Betz and Johannes Purkinje have all been credited with describing the giant motor nerves of the cortex.

Rufus of Ephesus is named as the first person to describe and name the optic chiasma. Other cranial nerve achievements are the discovery of the tenth cranial nerve by Marinus, and the description of seven cranial nerves by Rhazes. The trochlear and abducens nerves were described by Gabriele Falloppio, and it was Samuel Thomas von Soemmerring who introduced the current classification of the twelve cranial nerves.

The credit for distinguishing between myelinated and unmyelinated nerves goes to Robert Remak, whilst the credit for describing myelin formation goes to Theordor Schwann. It was Louis-Antoine Ranvier who described the gaps between myelin sheaths called the nodes of Ranvier. The different types of sensory nerves were described by Herbert Gasser, and it was Friedreich Merkel who described the sensory receptors now known as Merkel corpuscles. Credit for describing the cutaneous distribution of sensory nerves goes to Henry Head, and it was Francois Magendie who recognised the different functions subserved by the dorsal and ventral nerve roots of the spinal cord.

The early understanding of how nerves function has a lot to do with the description by Hermann Helmholtz of the electrical nerve impulse velocity. The resting membrane potential was described by Julius Bernstein and Walter Nernst, whilst Keith Lucas and Edgar Adrian measured peripheral nerve impulses, Adrian going on to confirm that nerve impulses are all or none. Alan Hodgkin and Andrew Huxley are credited with describing the mechanisms of action potentials, whilst Joseph Erlanger and Herbert Spencer Gasser described the function of single nerve fibers.

Whilst nerve function is electrical, it is chemicals that bridge the gap between nerves. The chemical neurotransmitters of peripheral nerves, norepinephrine and acetylcholine, were isolated by George Barger and Henry Dale. The credit for establishing chemical neurotransmission between nerves and muscles, at the neuromuscular junction, goes to Otto Loewi‘s dream-inspired work on Vagusstoff. The discovery of the central nervous system neurotransmitter GABA is credited to Eugene Roberts and Jorge Awapara. Most of the later work on neurotransmitters were made by Julius Axelrod, Bernard Katz and Ulf Svante von Euler, and the credit for elucidating the function of ion channels goes to Erwin Neher and Bert Sakmann.

The visual system is fundamental to neuroscience, and credit for describing its mechanism goes to Ragnar Granit, Halden Hartline and George Wald. The merit for elucidating the details of visual processing goes to David Hubel and Torsten Wiesel. The sense of smell is similarly important, and initial work on this was made by David Ferrier, but it is to Linda Buck and Richard Axel that kudos go for discovering odour receptors, and for describing the configuration of the olfactory system.

The acclaim for establishing the anatomical foundations of memory goes to Brenda Milner for her work on Patient HM. It is however Eric Kandel who has the honour of working out the functional process of memory formation. The gate control theory of pain was established by Ronald Melzack and Patrick Wall, whilst credits for establishing the nature of prion diseases go to the lively Daniel Carleton Gajdusek, and the indefatigable Stanley Prussiner.

Thomas Willis, Henry Duret and Johann Heubner first described the arterial circulation of the brain, whilst the electrical brain wave activity of the brain was first recorded by Hans Berger, incidentally when he was investigating telepathy.

And so ends this rapid whizz through the annals of neuroscience. This is just the condensed tip of the iceberg; to learn more about the fascinating giants who defined the glorious history of neuroscience, you may wish to slowly digest the following sources:

A Short History of European Neuroscience

Minds Behind the Brain

Coma After Cardiac Arrest: Should Rhythmic and Periodic EEG Activity Be Treated?