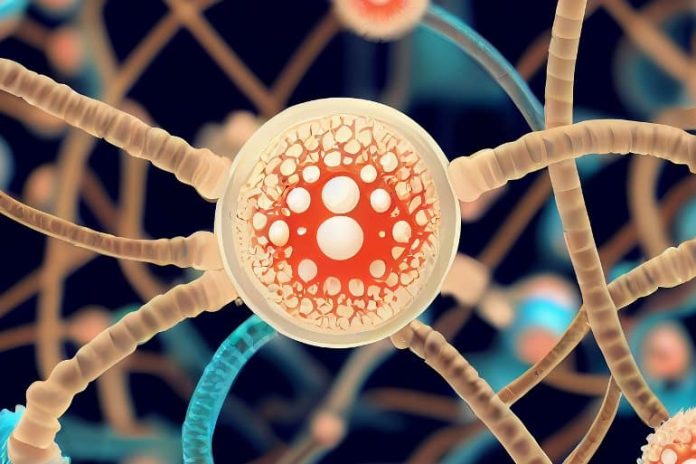 Summary: The Huntington’s disease protein huntingtin may have a role external to the neurodegenerative disease. Researchers say Huntingtin is involved in neural injury and regeneration.

In a new University at Buffalo-led study, scientists propose a new role for the huntingtin protein (HTT), which causes Huntington’s disease when mutated.

A team led by UB biologist Shermali Gunawardena has been investigating HTT and its basic functions in cells called neurons for a long time. The scientists previously found that in its unmutated form, HTT regularly travels along neuronal highways called axons, both toward and away from the cell’s nucleus.

A new study builds on this past work, detailing a previously unknown role for HTT in cellular compartments that move in one direction, toward the nucleus.

The research suggests that HTT is involved in neuronal injury and regeneration — a novel discovery, says Gunawardena, PhD, associate professor of biological sciences in the UB College of Arts and Sciences.

“We are finding that HTT is packaged in different types of moving cargo within cells, and that it’s involved in so many processes. This suggests that it’s really a key protein in controlling a lot of cellular pathways that are important in cell survival. It doesn’t have just a single role, so it’s a very complex protein to understand,” Gunawardena says.

In the new paper, “We show that the huntingtin protein is involved during neuronal injury,” Gunawardena says.

“When neurons in fruit fly larvae were injured, we see that HTT moves from the injury site to the cell body. It likely carries components that are necessary for survival of the neuron toward the cell body, where the nucleus is and where proteins are made.”

Experiments suggest that this HTT package may carry signaling molecules that “are essential for activating the production of proteins needed for neuron regeneration,” Gunawardena says.

She adds that, “future studies will be needed to determine the identity of the molecules involved in the regeneration.”

The study was published on Sept. 9 in the journal Autophagy.

“While many studies investigate disease mechanisms of HTT in Huntington’s disease, here we focused on investigating basic roles of HTT in neurons. By combining a variety of laboratory techniques, we were able to model a novel mechanism in which HTT helps injury signals transport back to the cell body after axonal injury,” says first author TJ Krzystek, PhD, who worked on the study as a PhD student in biological sciences at UB and is now a postdoctoral research fellow at Boston Children’s Hospital, Harvard Medical School and the National Institutes of Health.

“We have known for decades that neurons of the central nervous system exhibit poor regeneration following axonal injury,” Krzystek says.

“By investigating more unconventional proteins and pathways in the context of axonal regeneration, we can learn more about the potential causes of this problem with the goal of eventually opening up possibilities for finding and validating future candidates to target new therapies.”

Funding: The study was funded by the National Institute of Neurological Disorders and Stroke, part of the National Institutes of Health, and the BrightFocus Foundation. Individual authors received additional support through the American Society for Cell Biology’s travel award program and programs at UB including the Mark Diamond Research Fund, the Niciszewska Mucha Dissertation Fellowship, the Beverly Petterson Bishop and Charles W. Bishop Neuroscience Travel Award, the Center for Undergraduate Research and Creative Activities, and the Philip G. Miles Undergraduate Summer Research Fund.

About this genetics and neurology research news

Reduction of Syx17 and chloroquine- or bafilomycin A1-mediated pharmacological inhibition, but not reduction of Atg5, disrupted the in vivo motility of these vesicles.

Together, our findings support a previously unknown role for HTT in the retrograde movement of a Rab7-LAMP1-containing signaling late endosome.

Racial Disparities in the Diagnosis of Autism Spectrum Disorder