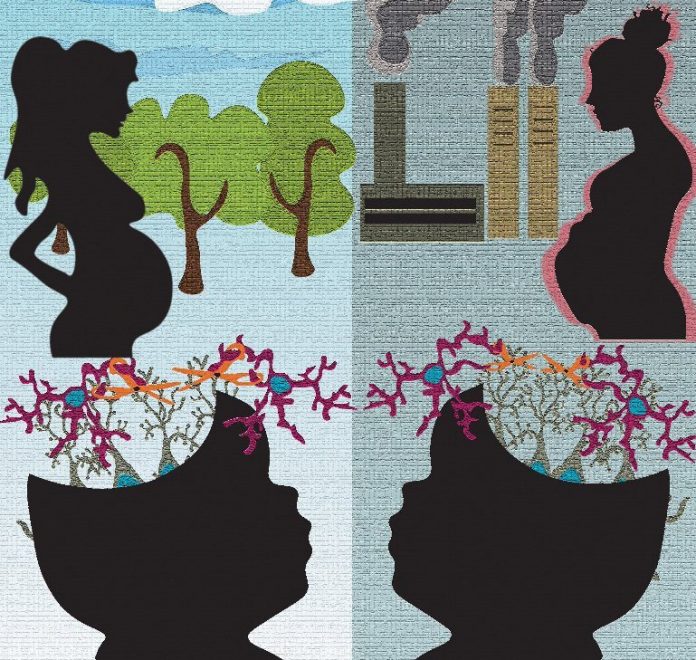 Summary: Air pollution along with housing insecurity and stress during pregnancy leads to an increased risk of autism-like social behaviors and differences in neural anatomy in male mice offspring. Researchers believe the changes could be due to the immune system.

Naval oceanographer Carina Block had a hunch that the jet exhaust fumes she and her fellow female sailors were regularly exposed to, combined with unavoidable job stress, was leading to adverse health outcomes for their children.

A new study in mice backs up Block’s suspicion, finding that air pollution along with housing insecurity while pregnant leads to autism-like social behavior and differently wired brains in male, but not female, pups. The immune system seems to be at fault.

“I was pregnant, stressed, and worked near planes,” Block recalled. “I walked past jet fuel exhaust every day. And my child ended up developing a neurodevelopmental disorder, hydrocephalus.”

Block’s daughter is now thriving, as is Block, who is now Dr. Block after earning her doctorate degree at Duke University in the labs of psychology and neuroscience professor Staci Bilbo, Ph.D. and cell biology professor Cagla Eroglu, Ph.D. However, Block’s new publication in the August, 2nd edition of Cell Reports provides convincing evidence that had she been gestating a son, he may have been born with autism.

Air pollution, such as exhaust emitted by diesel engines in trucks, is linked to increased rates of neurodevelopmental disorders, such as schizophrenia and autism. While 99% of people across the globe live in cities with unhealthy air, only one in every 44 children are diagnosed with autism (and four times more boys than girls).

Why doesn’t everyone develop autism then?

“Environmental toxins are worse for some people than for others and it’s always the most vulnerable populations that are affected,” Bilbo said. In the case of autism and air pollution, Bilbo thinks the missing link is maternal stress stemming from poverty and housing insecurity.

“It’s not that wealthy people aren’t stressed,” Bilbo said. “But it’s different when you have to worry about where you’re going to live and whether you’re safe in your home.”

While there are convincing data in humans supporting Bilbo’s claim, it’s impossible (and unethical) to directly test these ideas in pregnant women in order to uncover the biological mechanism by which air pollution and stress may conspire to rewire the brains of developing children.

To fill this gap, Block and her team exposed pregnant mice to the poor housing and air quality conditions that many people endure every day and looked at how their offspring fared.

As a proxy for air pollution, mice moms were exposed to diesel exhaust particles, the invisible yet pernicious pollutant semi-trucks and construction machinery regularly spew. Towards the end of their pregnancy, mice moms were dealt another stressor: insufficient housing. Pregnant mice were allotted less building materials than usual to construct their nests with for their pups.

Despite all this, stressed moms were still stellar parents—they nursed and groomed their pups just as much as those who were spared from prenatal stressors. But while their daughters grew up as expected, their sons misread social cues throughout life.

As teenagers, males born by stress and smog exposed moms preferred hanging out with a yellow rubber duck rather than a nearby mouse (mice usually prefer the company of one of their own rather than a bath toy).

Next, Block and her team did what any card-carrying neuroscientist would do: she looked at whether the brains had been rewired early on, leading to shyer male teens. Specifically, the research team wondered if male brains didn’t get their necessary refinement early in development.

Early in life, all animals are born with an overabundance of brain cell connections, called synapses, that need to get pared down as we grow up. The synapses leading to successful tasks, like picking up a glass, are maintained and strengthened, whereas the connections that lead to failed attempts get removed.

Stressed moms who had inhaled diesel fumes gave rise to males who, as toddlers, missed their scheduled synapse-shaving in the anterior cingulate cortex (ACC), a brain region important for perceiving and producing social cues. Male’s overabundance of synapses in this region seemed to explain their shy social tendencies as teenagers, but it left open the question of how a double-hit of smog and stress during gestation halts typical brain sculpting.

To get at that question, Block and her team looked at the immune system, specifically at immune cells in the brain called microglia.

Aside from monitoring for bacteria and viruses, microglia are also on alert for weak or dead synapses, which they readily slurp up to help tidy up the brain. Block reasoned that if there are more synapses than usual, perhaps there aren’t as many microglia in the brains of affected males.

To her surprise, Block found that adolescent males from stressed moms had just as many microglia in the ACC as did their peers from non-stressed moms. However, smog and housing stress lead to microglia having less of the protein that stimulates their appetite for synapses, which likely explains the observed overgrowth.

By adulthood, everything got flipped around. Males from smog and stress exposed moms now had fewer synapses in their ACC and were more gregarious than their unexposed peers. This atypical tendency to be more outgoing rather than reserved mirrored the behavior and brain activity of mice with autism-linked genes recently described by Block’s collaborator and co-author, Duke neurobiology professor and psychiatrist Kafui Dzirasa, MD, Ph.D.

Dzirasa adds that many of his patients with autism would fail the standard lab tests used to diagnose mice, which essentially pigeon-holes rodents as autism-like if they have less inclination to socialize. Instead, Dzirasa and Block say that for people with autism, it’s more of a misunderstanding of social cues and conventions rather than being inherently introverted.

Block and Bilbo suggest this work provides a clear mechanism in mice that may explain why high levels of air pollution increases the likelihood a child will develop autism only if they’re born in a poor neighborhood. It might also lead to drugs to help prevent microglia from being manipulated by environmental stressors since diesel exhaust and housing stress triggers a similar immune response when pregnant women catch the flu.

For now, Bilbo and her team hope that this unequivocal evidence about the impact of stress and air pollution during pregnancy pushes policymakers to promote legislation supporting clean air initiatives and social services, such as improved and expanded public housing.

“You can’t ignore this study’s mechanistic findings,” Bilbo said. “This is happening, and this is how.”

Gestational exposure to environmental toxins and socioeconomic stressors is epidemiologically linked to neurodevelopmental disorders with strong male bias, such as autism.

We model these prenatal risk factors in mice by co-exposing pregnant dams to an environmental pollutant and limited-resource stress, which robustly activates the maternal immune system.

Precise inhibition of microglial phagocytosis within the anterior cingulate cortex (ACC) of wild-type (WT) mice during the same critical period mimics the impact of prenatal stressors on a male-specific behavior, indicating that environmental stressors alter neural circuit formation in males via impairing microglia function during development.