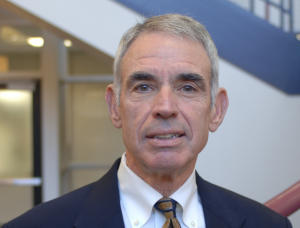 Every day, we are constantly bombarded with sights, sounds, and other stimuli that threaten to distract us from specific tasks. Over the last several decades, cognitive neuroscientists have made tremendous progress in understanding the brain processes at work when people exert cognitive control to overcome potential distractions. They have developed a variety of laboratory tasks for such research, most often testing how quickly and accurately people can perform the given task in the face of a potential distraction or conflict. John Jonides, a cognitive neuroscientist at the University of Michigan, thinks it’s time to rethink those lab tasks.

The recipient of the Cognitive Neuroscience Society’s (CNS) 2022 Fred Kavli Distinguished Career Contributions Award, Jonides is working to further evolve laboratory tasks away from thinking of response time as a dependent variable and toward thinking about it as an independent variable. In doing so, he and his team are elucidating new insights about the psychological processes related to distraction — framing them as a “as a race between reflexive processes and processes driven by goals.” This work promises to help research related to cognitive disorders, such as depression and attention deficit hyperactivity disorder (ADHD).

I spoke with Jonides about this new work and the larger body of work on cognitive control, which he will be presenting at the CNS annual meeting in San Francisco this April, as well as exciting trends he sees in the field.

CNS: What got you started in cognitive neuroscience and what personally drives your work forward?

Jonides: Around 1989, when I was finishing up a tour of duty as a dean, I came across the seminal 1988 PET study of word processing by Petersen, Fox, Posner, Mintun, and Raichle.  It was an eye opener to realize that neuroimaging techniques could provide information about processing mechanisms in the brain.  That paper and two subsequent years of a postdoctoral experience in the Michigan Medical School served as the foundation of my ensuing work.

As for driving forces for my work, they are motivated by the endlessly interesting questions about how the brain delivers cognition and then turns this into behavior.  I have always been keenly interested especially in how we manage to go beyond reflexive, automatic behaviors to achieve goals that we have set ourselves, and much of my work has centered on this issue.

Most studies of cognitive control use response time as the critical measure, but there are problems in doing so. Our new technique avoids these problems and reveals what we have come to model as a race between reflexive processes and processes driven by goals.

CNS: Can you give us a preview of your CNS 2022 award lecture in April, especially any new research you might be presenting?

Jonides: First, and foremost, I will open the talk by giving great thanks to my faculty and student collaborators over the years. To me, cognitive neuroscience is a team sport, and I have been hugely fortunate in having a long series of spectacular team members. I want to be sure that they are recognized for their contributions because this award is only in small part due to my individual contributions.

Second, I will be presenting new research. With current collaborators Taraz Lee, Han Zhang, and Tyler Adkins, I have developed a new behavioral technique to interrogate cognitive control processes, and it is a truly exciting development.  Most studies of cognitive control use response time as the critical measure, but there are problems in doing so. Our new technique avoids these problems and reveals what we have come to model as a race between reflexive processes and processes driven by goals. I will be talking about various implementations of this technique to study cognitive control in several tasks.

CNS: What have been you and your team’s most proud/significant contributions to understanding cognitive control?

Jonides: This is akin to asking who is my favorite child, so I’m going to duck the question. But I will say that over the years, including current research, we have spent a good deal of time dissecting processes of cognitive control to see whether they are all of a kind or whether there are distinctly different ones. I am also quite proud of the work we have done in applying what we know about cognitive control to understanding deficits in these processes among those with major depressive disorder and ADHD.

CNS: What excites you most about the field of cognitive neuroscience right now, and where do you think we’re heading?

Jonides: So much excites me, but perhaps the most promising developments are in the technology and analysis techniques to make the most of neuroimaging. My own specialty has been functional MRI, and there have been developments in this field by leaps and bounds in the past 30 years. These have occurred in both data acquisition and data analysis techniques, and the extent to which this has pushed forward the value of neuroimaging has been very impressive.

CNS: What’s next for your own research?

Jonides: We have been spending a good deal of time looking into individual differences in cognitive control, including continuing examination of pathology as it affects control, most notably for ADHD.

CNS: What are you most looking forward to at the CNS annual meeting in San Francisco this April?

Jonides: Meeting with colleagues in person for the first time in nearly 2 years!

Getting Romantic at Home Wearing an EEG Cap

How In-Office Botox Can Restore the Ability to Burp