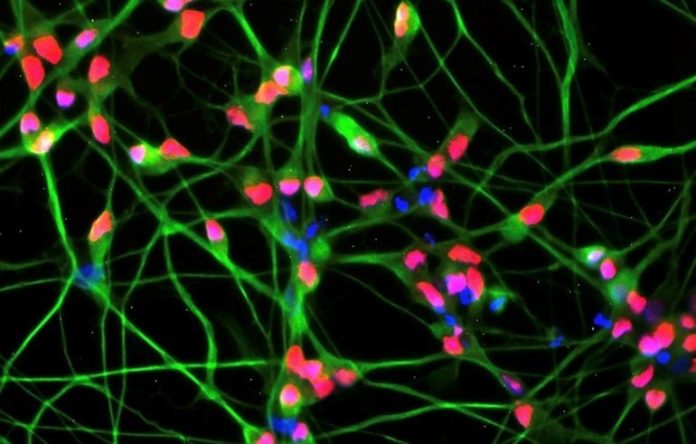 Summary: People with ALS have 2.5-fold higher levels of arachidonic acid, a lipid commonly found in fatty parts of meat and fish that spurs on the inflammatory process, in their spinal motor cells than people without the disease. Treatment with caffeic acid, an anti-inflammatory compound naturally found in coffee, tea, and tomatoes, reduced some of the symptoms associated with ALS, and extended lifespan in animal models.

The study, which focused on genetic pathways involved in how spinal motor cells process fats, found that compared with people without ALS, those with the disorder have about 2.5-fold higher levels of arachidonic acid, a lipid commonly found in the fatty parts of meat and fish and that is known to spur on inflammatory processes needed to repair wounds or tissue damage.

Notably, by tampering with the arachidonic acid pathway in mice bred to develop the biological hallmarks of ALS, the researchers say they were able to reduce the condition’s muscle-weakening symptoms in the mice — which experienced a 20%–25% increase in grip strength — and extend their survival by two to three weeks.

A report on the work, led by Johns Hopkins Medicine researchers, appears in the Nov. 15 issue of Nature Neuroscience.

The scientists used caffeic acid, an anti-inflammatory compound found naturally in coffee, tea, tomatoes and wine, to tamp down the arachidonic acid pathway, but they caution that people with ALS should not rush to treat themselves with the substance, which is sold as an unregulated dietary supplement. More studies are needed to determine safe levels of a caffeic acid supplement — some reports have indicated potentially harmful side effects, including cancers and gut problems.

Some 30,000 people in the U.S. have ALS, according to the researchers, and about 10% of cases can be attributed to heritable genetic alterations. The rest occur sporadically. There is no known curative treatment.

The new study built on the established observation that though patients with ALS lose most of their muscle control because of damaged spinal motor neurons, generally they can still control their eye movements, which are guided by ocular neurons, says Gabsang Lee, D.V.M., Ph.D., associate professor of neurology at the Johns Hopkins University School of Medicine and member of the Institute for Cell Engineering at Johns Hopkins Medicine.

To explore the potentially important genetic differences between disease-free ocular neurons and spinal motor neurons that bear the brunt of ALS, Lee’s team studied stem cell lines they cultivated from a person with ALS. Looking at the genetic pathways actively making proteins, the scientists found more activity in genes that control lipid metabolism — the process in which cells process fat.

An omega-6 fatty acid that controls the body’s inflammatory response, arachidonic acid has been linked to Alzheimer’s and Parkinson’s diseases and, two decades ago, researchers found higher than expected amounts of the enzyme in neuromuscular tissue of people with ALS.

Lee says lipid pathways have been highly studied because they are critical parts of the cell membrane, that enable the flow of molecules in and out of cells. Cell membranes often break when there is inflammation, and Lee says the body must tightly regulate arachidonic acid, or inflammation can run amok and send signals to the immune system to destroy neural tissue.

To further test the role of arachidonic acid, the investigators performed experiments to reverse its effects by feeding caffeic acid first to fruit flies genetically engineered to develop ALS-type symptoms. Flies fed caffeic acid were able to move around more, climb up the test tube more often and live longer than flies that did not receive the compound.

The scientists then conducted similar experiments with caffeic acid in mice bred to develop ALS, and those that received the compound lived two to three weeks longer than mice not fed the compound.

Although the new evidence may one day offer potential new strategies for therapy, Lee says that questions linger. “We don’t know yet why ocular and spinal neurons differ in lipid metabolism or what percentage of ALS patients have alterations in the arachidonic acid pathway,” he says.

Lee has filed provisional patents for technology related to the potential use of the arachidonic acid pathway to treat ALS.

Funding: Funding for the research was provided by the Robert Packard Center for ALS Research, the National Institutes of Health (R01NS093213), the National Research Foundation of Korea, the Donald E. and Delia V. Baxter Foundation, and the Department of Molecular Microbiology and Immunology at the University of Southern California.

Amyotrophic lateral sclerosis (ALS) is a devastating disorder in which motor neurons degenerate, the causes of which remain unclear. In particular, the basis for selective vulnerability of spinal motor neurons (sMNs) and resistance of ocular motor neurons to degeneration in ALS has yet to be elucidated.

Pharmacological reduction of arachidonic acid levels was sufficient to reverse ALS-related phenotypes in both human sMNs and in vivo in Drosophila and SOD1G93A mouse models. Collectively, these findings pinpoint a catalytic step of lipid metabolism as a potential therapeutic target for ALS.