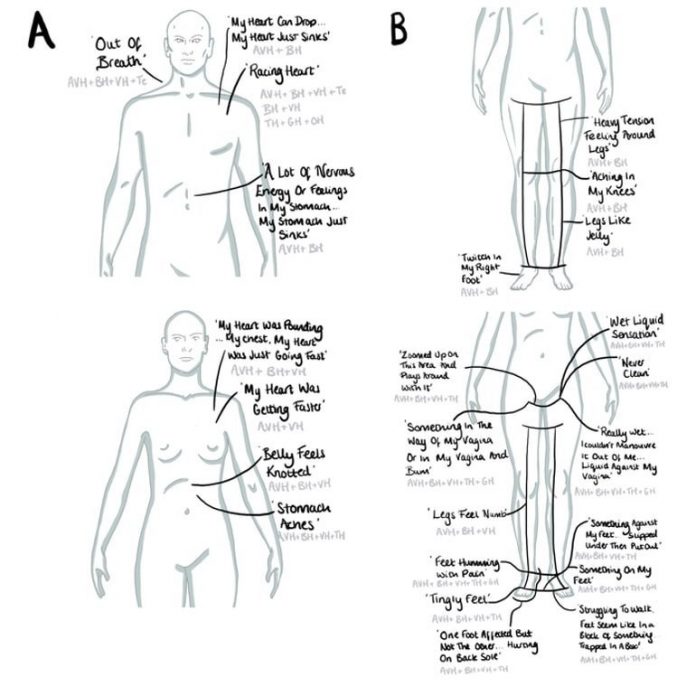 Summary: Researchers have created the first body map of sensations experienced during hallucinations in people not experiencing psychosis.

Leicester psychologists have, for the first time, created body-maps of the sensations which arise during hallucinations in people experiencing psychosis.

The study, published in The Lancet’s EClinicalMedicine, provides the most extensive descriptive data to date on the feelings which arise during hallucinations and where individuals reported sensations in the body. University of Leicester researchers also studied the emotions reported during hallucinations, with confusion, fear and frustration being the most common.

Although there was great variation in the localisation of feelings across participants, for each individual feelings were recurrently concentrated in particular body areas. Areas of concentration often held repeated sources of feelings like pain, heat, or tension.

Dr Katie Melvin, of the Department of Neuroscience, Psychology and Behaviour at the University of Leicester and corresponding author for the study, said:

“During a systematic review of existing research, we found indicators of the contributions that multiple senses, emotions and feelings may make to hallucinations.

“We designed a study and developed the novel but simple multimodal unusual sensory experience (MUSE) map method to investigate these features further. MUSE maps involve documenting hallucinations in daily life and include body-mapping. The article shares new insights through body-maps and data on the immediate feeling of hallucinations.

“The range of feelings in the body and around the body (into peri-personal space) were particularly interesting. Participants often described that the method helped them share experiences that were difficult to put into words.

“The methods and outcomes of this study can contribute to advances on how we understand hallucinations and how we can support people who experience them. The next steps for this area of research will be further understanding the embodiment and feeling of hallucinations in different populations and developing interventions to support with this.”

Psychosis is a term which describes experiences where an individual may have difficulties in determining what is real and what is not real.

Research indicates psychosis is associated with experiencing trauma, adverse life events, and stress. People may be given a diagnosis such as schizophrenia. Experiences of perceiving or believing things which those around us do not can also occur in physical health conditions such as brain tumours or acute infections.

Psychosis can have serious adverse outcomes on individuals including distress, lack of sleep, social withdrawal, lack of motivation, difficulties in carrying out daily activities, experiences of discrimination and lost opportunities.

Participants in this study were asked by the research team to prospectively document the feeling and senses of hallucinations for one week prior to an interview.

Novel visual diary methods involving drawing, writing and body-mapping generated 42 MUSE maps, which set out the specific areas across the body – and beyond, in so-called peripersonal space – where participants experienced sensations during hallucinations.

The study found that hallucinations were characterised by numerous feelings arising at once, often including multisensory, emotional, and embodied features. Researchers suggest further uptake of visual, ecological and prospective methods may enhance understandings of lived experiences of hallucinations.

About this hallucinations and body mapping research news

An observational design asked participants to prospectively document the feeling and modality of hallucinations for one week prior to an interview. Novel visual diary methods involving drawing, writing and body-mapping generated 42 MUSE maps (multimodal unusual sensory experience), analysed with a participatory qualitative method. Twelve people took part: all experiencing hallucinations daily, accessing early intervention in psychosis services, given psychotic-spectrum diagnoses, and living in the community. The study took place during a seven-month period in 2018 at Leicestershire and Rutland’s Psychosis Intervention and Early Recovery service (UK).

All documented hallucinations co-occurred with bodily feelings. Feelings were localised to specific body areas, generalised across the body and extended beyond the body into peripersonal space. Co-occurring emotional feelings most commonly related to confusion, fear and frustration.

Hallucinations were characterised by numerous feelings arising at once, often including multimodal, emotional, and embodied features. Within this study, the immediate feeling of hallucination experiences were readily communicated through prospective, visual, and ecological information gathering methods and particularly those which offer multiple modes of communication (e.g. body-map, visual, written, oral). Uptake of visual, ecological and prospective methods may enhance understandings of lived experiences of hallucinations.Funding: University of Leicester.

Speaking “Baby Talk” to Infants Isn’t Just Cute: It Could Help Them Learn to...

Stars, brains, and enzymes: a celebration of MIT science