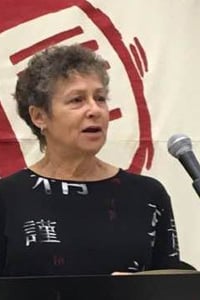 MIA Editors: This is a tribute written by Celia Brown, Ron Bassman and Peter Stastny.

We mourn the loss of Darby, our friend, colleague, boss, comrade and inspiration, who passed way too soon from a devastating cancer and its treatment. As a team, the four of us had a lot of fun, conviviality and a mission transforming the mental health system in New York. We tried to improve the system from within, but the system was stronger than us.

Darby was always consistent and passionate in her leadership, as well as clear about the formidable obstacles ahead. She never trusted the system and tried to remain a thorn in its side, until the people running it saw her true colors, forced her out, and disbanded our team. Without Darby, peer specialists would not have become established in NY as the first state in the nation. At the same time, she was highly skeptical about the potential of peer specialists actually being able to promote true transformation in a system that is still wedded to institutionalization, coercion and biological reductionism.

Only a few months ago the four of us had our first reunion after a number of years over zoom and Darby was already ailing, but pushing on. She remained engaged in the fight until virtually days before her passing and never abandoned the cause. It was heartbreaking to see how she struggled to keep up with her many engagements in spite of a perpetually worsening “chemo fog.”

It is with sadness as I reflect on the passing of Darby Penney. As I write about Darby, there is so much to impart because I either witnessed her greatness or was part of it in New York State. She was the first Director of Recipient Affairs for the Office of Mental Health. Darby was my supervisor in the 1990’s and early 2000s. As an effective policymaker, Darby created policies to support innovative peer-run programs in NYS. This was a time when non-peer clinicians believed that they were the only ones who can provide mental health services for people with psychiatric histories. Darby changed this perspective.

She strongly believed that peers, ex-patients and survivors can support and empower their fellow peers. Peer-run services were on the rise in New York State. Darby would tell you that if organizations did not have at least 51% of people with psychiatric histories on their board, then it wasn’t peer-run, but at best peer-driven. Darby supported truly peer-run services and training for us and by us. She secured funding in the development of peer-run services and projects. This wasn’t easy, but she never compromised. Darby wrote an article on this subject titled “How to Recognize A Peer-Run Program. ”

Working with Darby, we were able to use our mental health expertise, peer support and first-hand experience of surviving the mental health system to create meaningful change. The four of us developed monthly Self-help & Empowerment Seminars and created a space to foster hope and empowerment, where consumers, peers and survivors could share their voices. We facilitated discussions on topics such as self-help, peer support, advocacy and advance directives. In my role as Director of Peer Specialist Services, I provided support and technical assistance to peers in their new peer specialist civil service title positions. Darby insisted that state psychiatric hospital administrators interested in hiring peer specialists develop a plan on how they would support them and define their role in state outpatient clinics. She also demanded that peer specialists should always work with other peers in institutional settings in order to lessen co-optation and provide mutual support for each other. Darby provided a statewide training for peer specialists in collaboration with Shery Mead, who taught us concepts of mutual peer support, later known as Intentional Peer Support (IPS).

Ultimately, Darby regretted the way peer specialist positions were implemented in NY state facilities. She and Peter recently wrote a piece for MIA on this subject. I respected her feelings about it. However, I felt honored to be one of the first peer specialists because it gave me an opportunity to work and support my fellow peers. I hear Darby’s words on peer support reflected in conversations that I have with peers. She advocated for the integrity of peer support which had a profound effect on people with psychiatric histories and on peer specialists.

Darby’s legacy will live on. She was my friend, colleague, and helped me find my voice. The last conversation we had was organizing the INTAR Peer Support Webinar on November 22, which is going to be in her honor (www.intar.org). Rest in perfect peace. I will miss you, Darby.

Darby and I worked together on many things, not the least on the trove of suitcases from former patients that was discovered in an attic of Willard State Hospital. Oddly enough, when Darby called me about this treasure, I was already looking for artifacts in abandoned state hospitals with my cinematographer friend Lisa Rinzler. Darby invited us to work on a project reconstructing the lives of these long forgotten souls who were once owners of the suitcases and their contents. This work culminated in a major exhibition at the New York State Museum that traveled through the country, and a book, The Lives They Left Behind, which sold many thousand copies.

With Darby’s insight, careful editing and unswerving dedication to these long departed “peers” we worked hard to do justice to people whose lives were curtailed by misfortune and institutionalization. One of them, Lawrence Mocha, worked as the gravedigger of Willard for nearly 40 years and took careful measure of each dead body of his fellow patients. With Darby’s help we were able to put names on the numbered anonymous graves the institution provided for them. Darby kept this project alive for over 20 years, giving many public presentations, and developed a website open to all.

Without Darby, my career as a renegade psychiatrist would clearly have taken a different course. She was among the first, along with Celia and Ron, who opened my eyes to the importance of engaging on a collaborative and personal level with people who identified themselves as survivors of psychiatry and extreme distress. Our collaboration became one of many in this realm and my gratitude to Darby will never cease.

It is with a sad heart that I reflect and feel the loss of Darby. Twenty-five years ago, my life changed when I resigned from my position as Executive Director of a seven-county comprehensive mental health center and acknowledged publicly that I was a psychiatric survivor. No longer hiding my past, I met Darby and took a job in New York. Darby became my boss, and no better boss could I have had. We shared a passion to use what we knew to empower our fellow travelers and create meaningful change. Perhaps we were naïve in believing that we had genuine power and did not realize that we were subject to and buffeted by the ever-changing political winds. Darby provided the support, protection and guidance for me to grow into my new identity. And during that time our friendship developed. Both of us were avid readers and shared books that we enjoyed. Whenever I wrote an article, I would seek her opinion. I knew that her critique would be unvarnished and genuine. Darby was also an outstanding editor, and I don’t remember any instance of her not being available when she was asked to edit.

A highlight of my work at NYSOMH was when Darby connected me with Celia Brown and Peter Stastny.

The project that I found most rewarding was the work we did to bring self-help and empowerment to the outpatient departments of the 18 psychiatric facilities throughout New York State. In addition to teaching the possibilities of recovery and the benefits of self-help groups to patients and staff, we were authorized to evaluate services at psychiatric facilities and send our report to the NYSOMH commissioner. Throughout that time we learned much from each other and developed a friendship and respect for each other’s view that has endured. All of our numerous efforts were made possible through the administrative protection Darby skillfully exercised. We were able to work on and develop many programs until our influence became too much to be tolerated by the changing state politics. I suppose my most memorable and enlightening interaction with the Commissioner occurred when I was imploring him to do something about the abuses in the system. His response, “My job is to make sure that the governor is not embarrassed.” I thought to myself, that would never be the job for the four of us.

I could share many stories about Darby, but I will share only one. Darby and I were at Rockland State Hospital to do an evaluation of their outpatient services. We were sitting in the conference room with the administrators and the staff psychiatrists. One of the psychiatrists who was sitting next to me was whispering to me his criticism of the opinions of what was being expressed. I realized that since I was introduced at the beginning of the meeting as Dr. Bassman, he assumed that I was a psychiatrist. About halfway through the meeting, Darby excused herself to go to the rest room. To her surprise, the secretary told her that she could not use that rest room because it was only for staff, not patients. Darby used that encounter to help abolish staff-only restrooms throughout NY State. If my memory serves me, she won that battle.

Too many memories of fights won and lost to recount, but most notable to me was her friendship. For many, Darby was intimidating; her forthrightness, her intolerance for being fake or insincere or fawning, hid her soft heart, kindness, and vulnerability. For those of us who got to be close with Darby, who saw the many sides of a complex, caring good person, we will value the time spent with her. And for Peter, Celia, and I, we shared the best job we ever had — made possible by Darby Penney.

MIA Editors: We encourage MIA Readers to add their remembrances of Darby Penney through the Comments to this post.