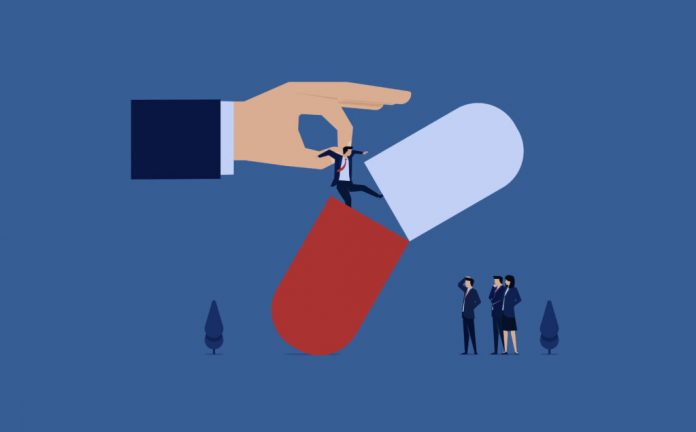 “Now you, as a professional, can get help to withdraw your patients from psychiatric drugs, including depression pills,” doctor and professor Peter C. Gøtzsche and psychologist and PhD student Anders Sørensen assured the participants at a seminar on 16 March 2018 at Hotel Nyborg Strand (see a 40 minute video summary in Danish here).

The seminar took place at the same time as the psychiatrists’ annual meeting at the same place, in the only room still available. A psychiatrist had tried to get a seminar in the official program, where Peter should have been one of the teachers, but he was told that there was no space in the program. Therefore, Peter decided to hold a seminar himself so that interested psychiatrists would not miss the opportunity to learn something about withdrawing psychiatric drugs. For the same reason, the seminar was held twice, both in the morning and in the afternoon.

I was pleasantly surprised by the presence of several psychiatrists in the room and their curiosity. That was at least a beginning. Hooray!

The first hour, Peter presented research that shows that depression pills do not work, and he presented evidence about massive fraud going on in the pharmaceutical industry. It’s awful!

What’s in it for him if he’s right? Nothing but the constant resistance and exclusion he has already been exposed to. But why? It reminds me of the story of the Emperor’s New Clothes, where the whole court lies to the emperor, telling him his clothes are so beautiful, whereas the little boy shouts out in the crowd: “But he has nothing on!”

The weavers, who are swindlers (as in the pharmaceutical industry), have managed to make the whole city pretend to see that the silk and clothes are amazingly beautiful. Only the little boy dares reveal the lie. In this metaphor, Peter is the boy. He has pointed out for several years that depression pills have no relevant clinical effect and that many psychiatric drugs should never have been prescribed and definitely not maintained over many years.

At the seminar, he reported that there is an escape. He and Anders Sørensen stated that there is a way to get off psychiatric drugs, even though many general practitioners and psychiatrists say that there isn’t. Both as a private person and as a nurse, I know of many cases where the message from the doctor was to change the drug or to increase the dose if there were too many unbearable side effects or no effect of the drug. It is completely absurd that we cannot help our citizens to have a life without drugs. Is this really the best we can do?

If you feel bad, or you are sorry or sad, stressed, or for that matter suffer from anxiety or depression, then you get handed a pill. There you go! There is no consideration of psychological factors; everything is reduced to a purported biological effect—even though that’s not supported by the evidence. It is completely disrespectful to treat people this way. We do not take our fellow human beings seriously.

We must be open to learning and to change. We need a paradigm shift here. Peter’s research team has shown that more patients continue treatment when they receive placebo than when they receive medication! This means that placebo (ie, nothing) is better than depression pills in the eyes of patients.

So why is our health care system not listening to him? Instead, doctors speak condescendingly of him, calling him arrogant. Why? Is he a threat? What is going to happen to all the drug companies that have swindled and withheld ugly information about the harms and ineffectiveness of the drugs and the many reports of suicides and other deaths? What should psychiatrists offer instead of pills? Will they become unemployed?

Many citizens have problems with anxiety, depression, and stress, but as Peter and Anders say, psychotherapy is the way forward. Of course, there are some cases where medication cannot be ruled out, for a short period of time. But we must respect human freedom in making an informed choice about accepting medical treatment or psychotherapy. Prescribing a pill is equivalent to saying to the patient: “I do not trust that you can handle this crisis yourself. Not even with the help of other people.”

There is an unequal relationship between doctor and fellow human being. Doctors are an authority figure, and many people listen to them. Many people respect their advanced degrees and experience. But doctors do not always know enough about the harmful effects and lack of effect of the medicines, or perhaps there is an element of denial. Man is not flawless. There is a gap between recognition and power.

But physicians who prescribe depression pills must try to be curious about the latest research and acknowledge that they are not always right or have the resources to be able to help. It would suit society and healthcare to recognize that we need a new paradigm to best help the population through various crises.

It is unsafe to have a treatment system that ignores the most reliable research that exists and what patients report about their experiences when they take the pills. It is unsafe for the citizens that we as therapists/caregivers do not have a critical approach to medicines. We burden patients with them and dare not do anything other than what we have always done. I think it’s embarrassing to be a part of that society and we should be ashamed.

It can be scary for many to hear the truth. Hence all the resistance, I think. But the truth is more important than our fear.

I share Peter’s desire to make a difference. Not just in the short term, but in the long term, to be able to help people have a good life without medication to the fullest extent possible.

But what happens when you speak up against the psychiatric establishment? Even if you present evidence to back up your case? In September 2018, Peter was expelled from the Cochrane Collaboration, which he co-founded in 1993, and he also lost his job. The main reason for this was Peter’s persistent criticism of psychiatry and psychiatric drugs. Cochrane’s trial against him was described by a British child psychiatrist in a book review as one of the worst academic show trials ever, and on the 3rd anniversary of his expulsion, Peter posted secret recordings of the board meeting that resulted in his expulsion and wrote about it on Mad in America.

But it’s not just Peter who experienced this. I experienced the same thing. I was suddenly fired after eight months of permanent employment at a private nursing home in North Zealand. It was a care oasis called Dagmarsminde. I applied to Dagmarsminde because I approved of their mentality. I share without hesitation the vision that “Care is medicine.”

The founder and manager of the nursing home Dagmarsminde, Maj Bjerre Ejby, said that love and care must be filled up before you can withdraw drugs.

Unfortunately, they still went too fast with that withdrawal. Two depression pills, citalopram and mirtazapine, were withdrawn from a resident shortly after she had moved in. The first drug disappeared after 14 days, the next after the following 14 days. The resident developed a pronounced withdrawal syndrome, and it was impossible to calm her down. She had all the symptoms; most pronounced were restlessness, anxiety, hallucinations, abdominal pain, and nausea.

I documented it all, but was called for an interview and was banned from documenting my observations. I was also banned from contacting the doctor, Joachim Nordahl, who was responsible for the tapering. I did not give up and referred to the National Board of Health’s recommendations for tapering, which are that you halve the dose every other week. Yet, according to an article in a national newspaper from 6 February 2020, even this is too fast. The physical dependence on the pills is often so pronounced that it takes many months, in some cases years, to taper them completely. And one should not keep on halving the dose. You need to reduce the dose much less when you come down to low doses, because the binding curve for the pills is not linear, but hyperbolic.

I was asked not to meddle around and trust the doctor. I was even told: “It is not you who is the doctor.”

Today, I regret that I did not contact the doctor. I would like to apologize to the relatives for that. The relatives did not understand why the patient was suddenly experiencing horrible unrest and anxiety. To my great surprise, I later learned they were not involved or for that matter even informed about the tapering. I was scolded for informing them.

The patient in this case had dementia and no ability to express in words the intensity of the withdrawal symptoms she was experiencing. Eventually she began screaming, and a so-called “safety box” with diazepam and morphine was prescribed. Such a “safety box” is usually only prescribed for terminal patients. But this woman was not dying. She could walk from the couch or bed to the toilet and eat and drink with help.

Diazepam had no effect, and after four days of morphine every four hours, she died. I reported the case to the Danish Agency for Patient Safety, and they took the case, but unfortunately the procedure is that the complainant will not be informed about the outcome of the process. Subsequently, I spoke with Nordahl, the doctor in charge, who does not remember anything about the course. He was actually unaware of what was going on and he received no information about the symptoms of the withdrawal syndrome. He promised me that, in the future, withdrawal would last longer and in collaboration with the nurses. I take his word for it.

I am shocked that a manager who has created such a beautiful nursing home as Dagmarsminde, which is a nursing home with the very best conditions and a fantastically dedicated staff, does not recognize her lack of knowledge about withdrawing drugs, but simply dismisses staff that knows better and refuse to keep quiet about the harms inflicted on residents. It’s scary that someone can have so much power and be so headstrong.

People with dementia do not necessarily benefit from psychotropic drugs. But a too-rapid withdrawal can be very dangerous and even deadly. You do not solve the problem by firing those who point this out, but that happened to me.

Unfortunately, this is what happens. The system is so corrupt that even in the best of circumstances, when mistakes are made, the only recourse is lying, firing whistleblowers, hiding the truth, and denying the words and research conducted by experts.

Trump, psychopathy, and the Goldwater rule