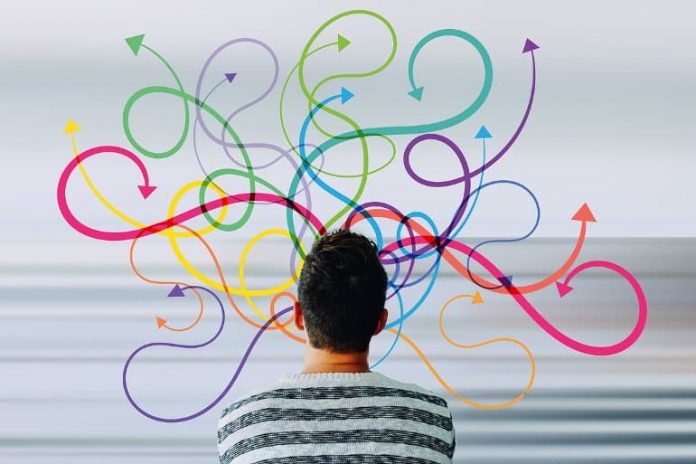 Where does your mind wander when you have idle time?

A University of Arizona-led study published in Scientific Reports may offer some clues, and the findings reveal a surprising amount about our mental health.

78 participants were trained to voice their thoughts aloud for 10 minutes while sitting alone in a room without access to electronic devices. Researchers used audio equipment to record those thoughts, then transcribed the recordings and analyzed them for content. In total, more than 2,000 thoughts were analyzed.

“We wanted to mimic the small breaks we have throughout the day, such as when waiting in line at a café, taking a shower, lying in bed at night and so on. These are all times during which external demands are minimal and internal thoughts tend to creep in,” said first author Quentin Raffaelli, a graduate student in the UArizona Department of Psychology.

Most psychology research addressing human thought either tells people what to think about, asks participants to remember what they were thinking about minutes before, or uses self-report questionnaires to capture freeze-frame snapshots of thoughts at different moments in time, according to the authors.

“While insightful in its own right, this snapshot approach doesn’t tell us much about how thoughts unfold and transition over time – features of thinking that we think are important for our mental health. To capture these dynamic properties of thinking, we need a method that records thoughts in real time and for extended periods,” said co-author Jessica Andrews-Hanna, an assistant professor of psychology who oversaw the research in her lab.

A Window to the Mind

The researchers sought to measure patterns of thinking. They were especially interested in capturing ruminative thinking, continuously thinking about the same negative thoughts, which is a common symptom of depression.

“Whereas most participants spent the 10 minutes thinking about the present or the future in an emotionally neutral way, participants who scored high on a rumination questionnaire experienced thoughts that were more past-focused and negative,” Raffaelli said. “Ruminative individuals were also more likely to think about themselves.”

The authors followed certain thoughts over time, measuring how long they lasted and how narrow or broad in focus they were. Ruminative individuals had negative thoughts that lasted longer than positive thoughts, and those negative thoughts became progressively narrower in topic over time.

“We were able to witness how some people became trapped in perseverative cycles of thinking,” Andrews-Hanna said. “We recruited a random group of people without knowing if they were diagnosed with any clinical condition for this study, yet it’s striking that in just 10 minutes of down time, we can capture thought processes that speak to many different mental health conditions.”

Some people, on the other hand, found the 10 minutes to be productive and inspirational.

“Some participants thought about positive topics or goals they wanted to reach,” Andrews-Hanna said. “Other people’s thoughts were quite creative. Many participants found that the exercise offered a refreshing break from the busy world around them.”

The exercise wasn’t designed for any therapeutic potential, yet many people viewed it as a therapy session with themselves.

“There is research on the power of externalizing our inner thoughts via journaling or sharing thoughts with others that I think this study taps into indirectly,” Andrews-Hanna said.

Idle Thinking as a Skill

The study ended before the COVID-19 pandemic, but the results seem more relevant than ever as many people have experienced more solitary idle time over the last year and half than at any other point in their lives.

The authors also conducted a version of this study during the grips of the pandemic and are now in the process of analyzing the results.

“Having to sit at home for such a long time affected people’s mental well-being dramatically,” Raffaelli said. “We saw this with the increase in anxiety and depression during the pandemic and the surge in substance abuse.”

When not in lockdown, idle time can be rare.

“Taking mental breaks seems to be increasingly undervalued in today’s busy and distracted society,” Andrews-Hanna said. “Western societies seem to reinforce a lifestyle where we’re always on the go, bringing our work home with us or distracting ourselves with email or social media.”

Although the study didn’t measure it, the authors speculate that training people as early as childhood to be comfortable during idle time may help maintain mental well-being.

“By taming our go-to reflex of taking out our phone whenever there’s a moment of silence, we can more fully realize the benefits of breaks on our mental health and creativity,” Raffaelli said.

Andrews-Hanna and her lab team are interested in the default mode network, a brain network that plays an important role in internal thoughts. They have been studying its functions and chipping away at how it might go awry in people with dysfunctional thinking styles, such as rumination or intrusive thoughts.

Their work has potential ties to functional magnetic resonance imaging, or resting-state fMRI, a popular method of brain imaging used by neuroscientists for brain imaging. The technique involves placing a person in a brain scanner for about 10 minutes and recording the patterns of brain activity and connectivity as spontaneous thoughts emerge.

“Eventually, we hope to connect the psychological characteristics of idle thought to the biological patterns of activity and connectivity changing across time to provide a fuller picture of consciousness and mental health,” Andrews-Hanna said. “We hope that one day, our inner mental lives won’t be as much of a mystery.”

The think aloud paradigm reveals differences in the content, dynamics and conceptual scope of resting state thought in trait brooding

Although central to well-being, functional and dysfunctional thoughts arise and unfold over time in ways that remain poorly understood. To shed light on these mechanisms, we adapted a “think aloud” paradigm to quantify the content and dynamics of individuals’ thoughts at rest.

Longer negative and shorter positive thoughts were also apparent as brooding increased, as well as a tendency to shift away from positive conceptual states, and a stronger narrowing of conceptual scope following negative thoughts. Importantly, content and dynamics explained independent variance, accounting for a third of the variance in brooding.

These results uncover a real-time cognitive signature of rumination and highlight the predictive and ecological validity of the think aloud paradigm applied to resting state cognition.