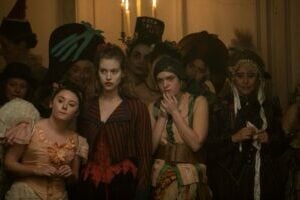 From CNN: “It’s a tale as old as time: A woman won’t conform to societal norms, traditional notions of femininity or what’s expected of her, and is dismissed as diseased. She’s considered hysterical. And, as such, she is locked up, burned at the stake, hidden away or placed under the supposedly steadier control of men.

It’s played out in real life, as well as in countless books, TV shows and movies. The French Amazon original feature ‘The Mad Women’s Ball,’ which premiered at the Toronto International Film Festival and is out on Amazon Prime today, is the latest addition to the canon.

Directed and scripted by Melanie Laurent, and based on Victoria Mas’ novel of the same name, the richly cinematic costume drama follows the story of Eugénie Cléry (Lou de Laâge), a well-heeled French girl living in Belle Époque Paris in 1885. Eugénie is smart, an avid reader and a rebellious character with an interest in spiritualism. She also sees dead people.

Her disregard for convention proves too much for her family. Against Eugénie’s will, and to the heartbreak of her doting brother (Benjamin Voisin), her father François (Cédric Kahn) commits her to a sinister neuro-psychiatric clinic, the infamous — and real-life — Pitié-Salpêtrière Hospital. It is an institution where women deemed unfit for public life would be ‘hospitalized’ and subjected to clinical surveillance and experimental treatments led by celebrated neurology pioneer Dr. Charcot (Grégoire Bonnet).”

The Answers Are in Our Weak Spots

This Conversation Will Change How You Think About Trauma