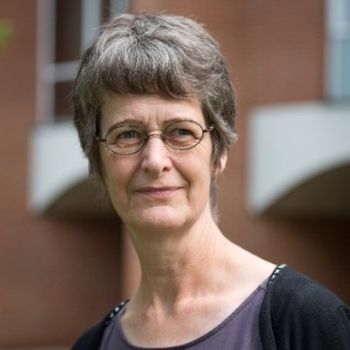 Prof Nicola Yuill personifies the interdisciplinary spirit that has always been at the core of Sussex. Whether as a student or as a lecturer, she has been part of all the Psychology departments that historically spread across three different Schools at Sussex. Her current research is the result of this background, with collaborations across diverse disciplines (e.g. Informatics, Linguistics and Education).

Nicola arrived at Sussex in 1977 to study a BA in Social Psychology with Cognitive Studies in the School of Social Studies (SOCL). Cognitive Science was just starting, and Sussex was a pioneer in offering that kind of course: “[it] was really unusual, you couldn’t do that anywhere else.” The Cognitive Studies programme was what they called a contextual stream: contextual courses were modules that had some specific link to Psychology, they ran the whole year and were related to each other, so they were an integral part of the degree. In addition to her core psychology modules, with a focus on social, Nicola also had to do a stream of Linguistics, Artificial Intelligence and Philosophy. “Four different subject groups working together, which I absolutely loved. It was fantastic!” she explains.

In addition to social psychologists, there were also developmental psychologists involved. In those days, Developmental Psychology was all about Piaget and his theory on how children learn through action, “[…] and of course, the IA robot people are really interested in that because if you want to build a robot, it has to move around the world, and do and act on the world to develop its intelligence.”

From that time, Nicola remembers fondly the conferences and seminars that brought some of the biggest names in the discipline to campus: Daniel Dennett, Jerry Fodor, Andy Clarke… “Sussex was internationally leading in Cognitive Science,” Nicola says emphatically, “it was THE place to be.”

When she finished her degree, Nicola wasn’t sure what to do next. Studying for a PhD had not crossed her mind but the Department of Experimental Psychology in BIOLS (School of Biological Studies) had a fully-funded PhD programme, so she applied. Her supervisor was Keith Oatley, who was interested in narratives and emotion (he wrote a book about it later on).

At the time, there was a very famous animated film by Fritz Heider and Marianne Simmel of geometrical figures randomly moving around the screen. Keith wanted to know how people would interpret those movements and how they would present them in stories, for example, the big mean triangle chased the little triangle until it ran away. Predating YouTube times, Nicola spent the first six months of her PhD recreating this stop-motion film with a still camera in the rat lab. She cut little triangles and circles and had to take a photo of every frame. She even made three different beginnings to check how they would affect the narrations. “[It] took me months and months, moving these [figures] with the tweezers. I can’t believe I did this!”, Nicola recalls. They then showed the video to Keith’s undergraduate students and asked them to write about what they had seen. The result of this study became Nicola’s first published article: “Perception of Personal and Interpersonal Action in a Cartoon Film.”

Keith was offered a job in Toronto, and Josef Perner, who had just joined the department, became Nicola’s second and last PhD supervisor. Josef was researching Theory of Mind, so Nicola changed her PhD: “I spent my days wandering around the library and I got interested in the law stuff (…) because basically law is all about criminal responsibility (…) manslaughter vs murder is all based on different assumptions about intentions and beliefs (..) There are lots of distinctions in law that are based on Theory of Mind.” Nicola was still interested in the social development aspect, so she focused her PhD on how children’s understanding of belief and intention influence the social judgements they make about situations. For example, how they would attribute responsibility in cases of accidents when there was no intention. “[It] was really exciting because all those ideas [on Theory of Mind] were being formulated,” says Nicola.

After a two-year postdoc in Robert Hinde’s Ethology Lab at Cambridge, Nicola returned to Sussex as a lecturer in the School of Cognitive Sciences (COGS), which had been founded just a year earlier. Nicola recalls: “I very much remember by my first day, coming through those lovely arches, and I was so happy. That’s where I want to be!”

Nicola’s office was on the top floor of Pevensey 3. In a corridor that she shared with colleagues from other disciplines, “one side had the linguists and the other was computer science people; the whole corridor was all mixed up.” She taught Psychology to students that majored in Linguistics, Philosophy and Artificial Intelligence. It came naturally to her as she had also studied those subjects in her undergrad and understood where they were coming from.

The School had lots of seminar series, and Nicola enjoyed attending the philosophy and robotics ones sometimes. She also ran reading groups (as she does now) and invited people in Experimental and Social Psychology, such as Andy Clarke and Josef Perner, to come and discuss their books with the students.

Having worked in both Experimental Psychology (as a Research Fellow after her PhD) and COGS, she found that they operated very differently. EP was more formal and traditional (after all, its founder, Stuart Sutherland, had come from Cambridge), whereas COGS was a new School in a relatively new area of research. “COGS was not hierarchical at all,” Nicola summarises.

In 2003 when all the Psychology groups joined under a single department within the new School of Life Science, Nicola met again with former colleagues and tutors from EP and Social. The merge didn’t affect her research much. She had always collaborated with people in other departments, and that continued to be the case.

She does miss teaching non-psychology students. “I like teaching people whose major is not in Psychology, and I don’t do that anymore. Well, actually I do,” she admits, “I seem to end up with people who are doing all sort of things on my third-year option.”

Her PhD students still have co-supervisors in Informatics, Education, and other departments. And she is on supervision bodies for students in other Schools. But, somehow, it doesn’t seem as natural as it did before: “[in COGS] nobody would bat an eyelid if you were supervising on a Masters course that was on a different subject.”

A unified School of Psychology has also brought benefits. Although some of that inbuilt interdisciplinarity that encouraged faculty to collaborate with colleagues from other disciplines within their Schools (SOCL, BIOLS, COGS) has been lost, we have gained a vibrant and integrated community of psychologists: “I really like working in Psychology. Lots of nice people, you know,” Nicola tells me. And the interdisciplinarity is still there, for example in Sussex Neuroscience, SARIC or Sussex Kindness.

Nicola is hopeful for the future of interdisciplinarity at Sussex, “I’m on the mailing list of the Digital Humanities Lab, and they do all sorts of really nice things, they are very interdisciplinary. So, I guess we’re re-inventing it.”

How to Help Someone with Postpartum Depression

How to be a Good Internal Consultant

Screens in Schools and their Effect on the Brain