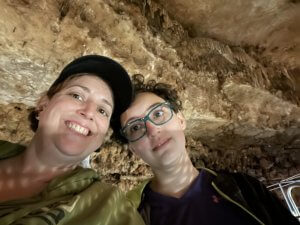 It was meant to be a fun take-your-daughter-to-work day: Dr. Anna-Marie Beck brought her five-year-old daughter, Addison, into the lab to demonstrate to her students how to perform a pediatric electroencephalogram (EEG).

But, as the reading began, Beck’s heart sank. Right there on the EEG monitor were all the signs that her daughter was at that very moment in status epilepticus.

Addison wasn’t exhibiting any noticeable symptoms — and her family hadn’t noticed anything abnormal before, Beck sad.

“We had no idea anything was wrong with her,” she said.

It was a total shock.

Status epilepticus describes a continuous seizure, often for more than five minutes without a break or return to baseline. There is a clear, recognizable brain wave pattern for patients in status, Beck said.

The event is very rare — even most patients with epilepsy never experience it. For those who do, it can cause permanent brain damage or death.

It can also be a sign of a number of underlying conditions including stroke, an imbalance in blood sugar, too much alcohol or withdrawal, and uncontrolled epilepsy.

Unfortunately, while some patients in status can have clear signs of a seizure — such as  abnormal movements, drooling, and loss of consciousness — this is not always the case.

“Some, especially kiddos, can walk around in status and you don’t know anything is going on with them,” Beck said.

Beck found Addison in status that day in the classroom, in front of a room full of students. She maintained her professionalism and has since used the story as a teaching tool for future technicians about maintaining composure in the lab.

Addison, as Beck could clearly see, had epilepsy. Her pediatric epileptologist would later say that she’d probably had it since she was about 2.

Thinking back on it, Beck said Addison would sometimes fall out of her bed and a couple times a month she would also vomit at night. None of that is too uncommon in small children but “we finally put it all together,” she said.

“With occipital epilepsy, seizures typically happen at night or out of sleep, and they are oftentimes associated with emesis,” she explained.

Because of the way Addison’s epilepsy snuck up on them, the pair are passionate about sharing their story. Two years ago, they did a talk together at the ASET-The Neurodiagnostic Society annual meeting. Addison was 10 at the time. She is 12 now and her seizures are well controlled.

Special thanks to Anna-Marie Beck, DBA, R. EEG T., Program Director of Neurodiagnostic Technology at Johnson County Community College, for sharing her stories with us.

Spotting Liars Is Hard, but Our New Method Is Effective and Ethical