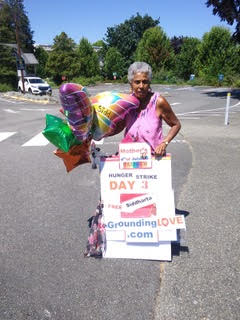 It’s 10 pm now on day 4 of my hunger strike (on liquids only) and I’m noticing I am feeling hungry and sad. I am thinking of food, but then I think about my 44-year-old child, Siddharta.

Sidd goes to bed hungry and there is nothing she can do about it. She has lost so much weight at Washington’s Western State Hospital and is now so terribly thin. So I will use my slight hunger discomfort to be in solidarity with Sidd’s major hunger pains.

Going to bed hungry in a so-called hospital is just WRONG!!!

I hadn’t been able to visit Sidd until two weeks ago because of covid. She is shockingly thin now and continues to tell me she does not get enough to eat. I called in a complaint and a dietitian came to talk with Sidd. By merely looking at Sidd, the dietitian diagnosed Sidd’s weight loss was due to her severe thyroid condition (a serious side effect of the psychiatric drugs.) Because Sidd has experienced so much trauma and harm during her forced stays at Western State Hospital, she doesn’t trust them to treat her thyroid, or any condition.

But the dietitian did order more food to be added to Sidd’s diet. It is interesting to note that Sidd has gained about 6 pounds already since more food was added in these two weeks, even though the thyroid condition has not changed. Sidd has asked me to request even more food and a daily can of Ensure, the liquid nutrition supplement they had added to increase her caloric intake, instead of the occasional can they had ordered.

Siddharta has had a laser focus on getting out of Western State Hospital since being placed on the discharge-ready list in April 2021. Every time I spoke with her, in those months following being put on the discharge list, she so clearly and articulately expressed the deep longing and desire to go home. She would give me assignments to do, hoping to expedite her release, while always querying me on what steps I had taken to hasten her release, making sure I had a next step in mind.

By the close of the business day, Friday June 25, 2021, with 3 unanswered voicemails and still no discharge date, I reached a turning point.

Early in the wee hours Monday morning, on June 28, 2021, I informed hospital administrators and many others, by email, that Siddharta needed a discharge date no later than July 2nd or I would start a Hunger Strike on July 4th.

By noon on Monday, June 28, Western State Hospital Administrators gave a discharge date of Thursday, July 1st! The last step was a risk assessment, which would be made before July 1. However, the administers made this sound like no more than a formality in Siddharta’s case, since Siddharta had been on the discharge-ready list for the previous two months. During that time, the treatment team hadn’t notified her or me of any significant changes that might endanger her discharge. I had noted and shared Siddharta’s growing frustration and some increased reactivity caused by undue continual confinement. I wanted to make sure that the staff was clear that any reactivity displayed now was caused by pent up despair and frustration at a failed discharge process. Such over-institutionalization was exactly what the OLMSTEAD LAW was enacted to prevent!

On Tuesday, June 29, the Director of Social Work, Candace Yi, called to instruct me on the exact place and time to pick Sidd up that Thursday, only TWO DAYS AWAY, at 9:30 am in the administrative waiting area!

Celebrating!!! Siddharta and I finally began making plans on what to do in the first few hours of Sidd’s long awaited freedom. A cigarette! Real food! Maybe Domino’s pizza, maybe Kentucky Fried Chicken, Subway sounds pretty good. “Maybe I will just wait until I get out and just think about it.”

On Wednesday, less than 24 hours before Sidd’s walk to freedom, I received a phone call from administrators saying that Dr. Zisken, Sidd’s treatment team doctor, and the Western State Hospital medical director not only blocked Sidd’s discharge, but took her completely off the discharge list, without any reference of harm to self or others, or prior warning.

I began my hunger strike (on liquids) on July 4th.

After having her hopes cruelly dashed to pieces by her treatment team, Siddharta not only goes to bed hungry, but now, in confusion and a very deep despair. I believe it was a retaliatory decision in response to my demand for a specific discharge date that was so very long overdue. I think they must have stepped on the toes of the doctors who play gods with people’s lives.

The less-than-23-hour revoking of Sidd’s long and desperately awaited discharge by the medical director and the psychiatrist has also had an additional harsh and crushing domino effect on Sidd’s mental health. Not only has Sidd developed confusion about not being discharged, but the laser focus clarity Sidd so articulately expressed about getting discharged and going home has been lost.

On Tuesday mornings, you can find me at Washington State’s Capitol, demanding and standing for Siddharta’s freedom without restrictions. Tuesday afternoon you will find me (and often allies) in front of Western State Hospital, demanding and standing for Siddharta’s freedom, until it is time for our once-a-week visit. Our once-a-week visit is the closest Sidd gets to the smell and feel of freedom on the outside, while pacing in a fenced enclosure where security guards make sure visitors do not take pictures or bring food.

Free Siddharta! Close Western State Hospital. Divert the money into the community and those most impacted to create a community where all hearts are welcomed and can heal and grow strong!

To support Sidd and create a community where all hearts are welcomed and can heal and go strong, please call Western State Hospital at 253-582-8900 and leave the message with the answering operator … “Tell Dr. Waiblinger to Free Siddharta Immediately with NO Restrictions!” And for more on our MOMs struggle, see here.

(Note: For those of you who have followed Siddharta’s story for many years, she has slowly been letting me know for several years that her gender identity is female.)