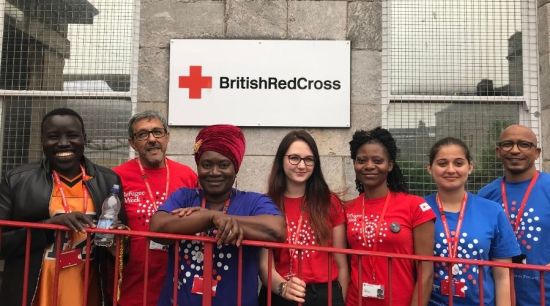 The significance of World Refugee Day

World refugee day is on the 20th of June every year and is a day designated by the United Nations (UN) to raise awareness about the lives, realities and hopes of refugees all around the world. The theme of this year’s refugee day is ‘Together we heal, learn and shine’, a statement of the UNHCR’s recognition that there needs to be an improvement in healthcare, education and opportunities for refugees in countries of resettlement, all-round the world.

WRF was initially held in June 2001, to commemorate the 50th Anniversary of the 1951 convention, passed by the international community and lead by the UN, to protect those fleeing from the atrocities related to World War II.  Amongst those who would have been safeguarded under this protocol include Sigmund Freud (Wotruba and Cernovsky 1987), Albert Einstein (Robinson 2019) and the School of Psychology’s very own Marie Jahoda (one time head of the Social Psychology group)(Billig, 2021). They were all refugees who migrated to their final host countries, where they made some of the most significant contributions to science that we have yet known, with the help of the opportunities afforded them at the time by their host communities.

Creating opportunities for women refugees through work during resettlement

Economic empowerment helps to promote independence, planning for the future, meeting members of the host society, providing the opportunity to develop language skills, restoring self-esteem and encouraging self-reliance for refugees (Bloch and Levy 1999, Tomlinson and Egan 2002, HomeOffice 2019). The benefits of employment include time structure, socialisation opportunities, a sense of purpose, status, and opportunities to engage in activity needed for wellbeing (Jahoda, 1971).

Resettlement agencies attend to males first to reduce case-loads and satisfy the needs of larger numbers, since women’s work-related needs tend to be more complex (Halpern 2008). This strategy shows a lack of insight in prioritising work placement and creates a systemic disadvantage for women in resettlement. There is now evidence showing that resettlement is creating a low-income minority within the refugee communities resettled into host communities (Gowayed 2019) particularly among women (Wimalasiri, 2021).

My research looks at the long-lasting effects of forced displacement on the working lives of women refugees during resettlement. This work examines how the complex interplay between system, psycho-social factors and the displacement experience creates actual and perceived disadvantages and barriers to work in this population; in view of understanding

Case-study on compassionate resettlement for women and work

I recently led a study and a related report in partnership with Plymouth City Council. It’s key aim was to gain a better understanding about the resources available to assist women refugees into work in the South West region of the UK. Also, to understand why there are only a small number of women refugees engaging with the labour market in the area, compared to the overall resident refugee population. The initial concept for the project was developed during a project and funds (2017-2018) called ‘Women’s Work’- Lloyds Bank Social Entrepreneurs programme start up grant, partly funded by a Big Lottery grant (LPA-000 000 6543). The study was steered by and supported by Plymouth City Council, the local refugee population in the Southwest region, the Department of Work and pensions, The Red Cross and a number of other local community organisations.

Amongst other findings, the outcomes of the study made clear an extraordinary effort made by local communities and stakeholders to assist refugee women to overcome the barriers to work. The study found a compassionate effort and exemplary network of formal and informal support and resources, dedicated to the refugee community, in relation to work. The approaches used in this region showed a justice-led approach to resettlement which has grown out of the needs of women refugees in the region.

However, the efforts of the stakeholders tend to be limited in the face of systemic barriers including lack of funding for skill-building, local employer prejudices which are still at large due to negative media messages about refugees, poor engagement with mental health rehabilitation following displacement due to a multitude of factors. Further barriers included intersectional cultural predispositions. These barriers contribute to a vicious cycle of poverty, similar to those experienced by women in refugee communities all over the world (UNHCR, 2021). Recommendations were made for improving local practice and policy in the report.

A seminar entitled ‘Women refugees and work in resettlement’ will be hosted in partnership between Sussex University and Plymouth City Council to mark this report, later this year. We hope to bring research, practice and users together to better understand this all-important topic and how we can make practicable changes based on findings from various projects related to this area. The select group will include academics from the School of Psychology, the School of Education and Social Work and the School of Global Studies at the University of Sussex. We will be joined by representatives of the refugee community, the UNHCR, Department of Work and Pensions, Odils learning foundation (Plymouth) and Institute of Employment Studies (IES, Brighton), as well as other project stakeholders.

Coming back to the theme of this year’s refugee day, Together we heal, learn and shine, it is clear from this study that any actions to improve the lives of refugees needs to be a multi-pronged, multi-party approach to achieve practical and equitable outcomes. A more coordinated effort is necessary from research, governments, international organisations, NGO’s, employers and community organisations, and the refugee community to make the real difference that is needed (as well as more responsible and balanced media coverage about refugees).

Dr Varuni Wimalasiri is a lecturer in organisational psychology at the School of Psychology of the University of Sussex. Varuni is part of the Social and Applied Psychology group. Find out more about Varuni’s research on gender resettlement.

How Has the COVID-19 Pandemic Affected Our Dreams?